Jamie Wheal is the author of the global best-seller and Pulitzer Prize-nominated Stealing Fire: How Silicon Valley, Navy SEALs and Maverick Scientists are Revolutionizing the Way We Live and Work[…]
Go to Profile
Part of the Series 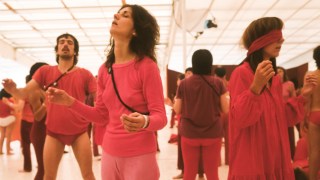 Scientology, QAnon, and Heaven’s Gate: why do we seek healing from cults?
▸
with
Jamie Wheal

JAMIE WHEAL: Everybody worships, right? The only question is what? So everybody cults. The only question is how? We are tribal primates and we are wired to seek the 'silverback' amongst us. We're highly status-conscious. We're always looking to see where our bread is buttered, where the love, attention, energy, success, access, information, you name it- and we jockey and we position. And this is especially true these days with the rise of Instagram influencers and everybody's a guru. We're betwixt and between, we're overwhelmed, we're collapsing in grief, and we don't know which way is up anymore. Will anybody make sense of all of this nonsense for me? And if you promise to get me to the other side better off than I am now, then you have hundreds of thousands of people these days that are deeply vulnerable and susceptible to that promise.

I'm Jamie Wheal, founder of the Flow Genome Project, and author of "Recapture the Rapture: Rethinking God, Sex, and Death in a World That's Lost Its Mind." As we're experiencing, it feels like there's kind of been a resurgence in awareness of cults, and whether that's NXIVM and Heaven's Gate, Plandemic and Q-Anon, and other more contemporary social movements, and, you know, to what extent are they displaying cultic tendencies? And that becomes a real issue. So, in the traditional scholarly sense, 'cultus' from the Latin, just means to worship. So, Kali had her cult in India, Dionysus in Greece, the Lycinan mysteries. Even Christianity before Emperor Constantine made it the state-sanctioned religion of Rome was a cult. Now, the trouble happens- it's not just can I find my own inspiration and healing and connection with the small group of people that I love. The question is, what happens when we put that into gear? What happens when we put it into culture? Because when you combine the boundary-dissolving experiences of profound catharsis or deep healing surrounded by other folks, you get culty communities, and that can become profoundly problematic.

In the traditional cult, you subjugated yourself to the lineage. There might have been a priest or an administer of the sacred, but they were in a line of many before them and they were occupying a role. And you subjugated yourself to the generations of participants in membership and norms and values. Then, late 19th century through today, you had a fracturing of the traditional religious world and you had many Eastern teachers ranging from Tibet to India to Vietnam coming to the United States, coming to Western Europe; and you had the rise of a lot of spiritual leaders who had broken with the lineages. And they said, "Now come to me, submit yourself." But this time it's not to a lineage, it's not buffered by generations and generations and elders and checks and balances and precedent. Now you're submitting yourself to me. "I'm the God-self." "I'm the guru."

And so that's when we ended up with the emergence of culty cults, individuals who had broken with their past, broken with tradition, and then said, "I'm the one." "I am fully enlightened." "I am God, man or woman." "I am all those things." So like in "Lord of the Rings," they grabbed the ring 'cause they were convinced they could do so much with it. And then they also weaponized access to peak states and healing, and so whether that was psychedelics or sexuality or, you know, boundary-eroding group encounter sessions or whatever it would be, they would erode those things. And then they would weaponize and use those techniques to extract allegiance, apologies, finances, whatever it would be, while people were undone in those very susceptible states. So we have traditional cults: submission of self to the lineage. Culty cults: submission of the self to the guru.

And then we have this notion of 'ethical cults:' ethical community worship, ethical cult-ure. And that's not submission of the self to anybody. That's actually valorization of the self as a sovereign individual, and connecting to collective emergent intelligence. So, if traditional cults was a little bit like taking your seat in the orchestra, and there's the conductor and there's the sheet music and there's the metronome and like play your part, right? And culty cults were a little bit more like a marching band, like there's the dude with the big hat up front and the baton and the whistle, like, follow that person. Then ethical cults are a lot more like playing jazz- which is call and response, listening, and a deep combination of agency. Like, "I can hit my notes and play my instrument and surrender," which is there's a thing we're looking for together, we'll know it when we find it, but we have to feel the force. We can't force the feel. So the question is, how do we do ethical cults? So I think step one: Let's first do no harm. Let's not keep building culty cults. Then let's say, "Okay, how might we build healthier communities of worship?" And in this case, I would just say bearing witness to life.

Can we actually take responsibility for our own development and for our own empowerment? And that's much harder than it sounds because we're terrified of our highest, fullest potential. Like, "Holy smokes, if I stepped up, could I keep it up?" If we're trying to build ethical culture where we don't surrender ourself, and instead of saying, "They could do it, but I never could," or, "They're the second coming, but I'm yesterday's news," can we actually accept our power and possibility without apology and at the same time, engage each other with curiosity and humility? And if we can do that, then we stand a chance of recapturing our rapture.

“Fame” is an illusion we’ve made together. Here’s how to undo it.