In Atlanta’s Lakewood-Browns Mill community, hundreds of residents live below the poverty line in what’s known as a food desert — an urban area where it’s difficult to find fresh food. To improve conditions, Atlanta recently passed a measure to convert a plot of undeveloped land into a food forest, where residents will be able to pick their own fresh produce for free.

The 7.1-acre space will include trees, shrubs, and vines that produce fruit and vegetables, in addition to trails, community garden beds, and gathering spaces, according to the legislation. Dubbed the Urban Food Forest, it’s set to be the first food forest in Georgia, and the largest in the nation.

“It’s just like going into a park and picking muscadines from a bush,” Councilwoman Carla Smith toldThe Atlanta Journal-Constitution.

The measure is part of Atlanta Mayor Keisha Lance Bottoms’ goal to put 85 percent of residents within one-half mile of accessible fresh food by 2021. Atlanta has spent years struggling to bring fresh food back into stores in low-income neighborhoods, where unemployment is high and many residents can’t easily travel across town to a grocery store with fruits and vegetables. Instead, many rely on cheaper options that are less healthy.

“Instead of talking about a food desert, the better term is really ‘food swamp,'” Kwabena Nkromo, Founder and Lead Principal of Atlanta Food & Farm LLC, toldThe Guardian. “There is an abundance of food, but it’s not healthy or varied.” 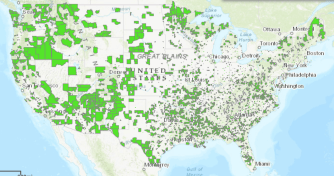 U.S. map showing low-income areas where a significant number of residents live at least 1 mile from a grocery store.

About 23 million Americans live in food deserts across the nation. Not eating fresh foods can lead to major health problems over time, contributing to diseases like diabetes and obesity. What’s more, it’s an epidemic that disproportionately affects certain populations, such as people of color and Americans in rural areas, as a 2010 report published by the nonprofit organization The Food Trust found:

“According to the Centers for Disease Control and Prevention, adult obesity rates are 51 percent higher for African Americans than whites, and 21 percent higher for Latinos. Black and Latino children are more likely to become obese than white children. The lack of healthy food retail also hinders community economic development in neighborhoods that need private investment, activity hubs, and jobs.”

Still, for residents in the Lakewood-Browns Mill community, the upcoming Urban Food Forest is hopefully an uplifting development for the particular plot of land.

“Residents still talk about the land’s former owners, who left excess produce from their farm on fence posts for neighbors to claim and enjoy,” USDA officials said in a statement. “Now this land will celebrate that history and make new memories for the community.”