Every August, herds of tourists gather in the tiny town of Buñol, Spain. As lorry trucks haul in payloads of tomatoes, they arm themselves with the fruity munitions and the battle begins. Juicy explosions go off in every direction, participants are painted a sticky red, and the streets flood with a most unsanitary gazpacho.

Anyone who has witnessed the spectacle has entertained two thoughts simultaneously: That looks like disgusting fun and, wow, what a waste of food!

La Tomatina may be a rollicking example of contemporary food waste, but it is hardly the most prodigious. According to a study published in the American Journal of Agricultural Economics, American households waste tons more food every year, and we can’t even excuse it as merrymaking. We just toss it in the dump. 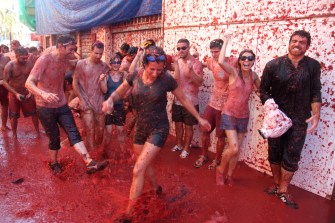 Participants at la Tomatina splash through the pureed remains of thousands of tomatoes.(Photo: Wikimedia Commons)

Then they analyzed the biological data of the participants to establish basal metabolic rates. The difference between food acquisition and the metabolic rate needed to maintain body weight was treated as “production inefficiency” — that is, uneaten and wasted food.

Their results show that the average American household wastes 31.9 percent of acquired food. The estimated value of that food is $240 billion annually, or about $1,866 per household.

But not all households waste equally. As Edward Jaenicke, study author and a professor of agricultural economics at Penn State, pointed out in a release: “More than two-thirds of households in our study have food-waste estimates of between 20% and 50%. However, even the least wasteful household wastes 8.7% of the food it acquires.”

Based on the study’s results, households that squander the least food tend to be either large or lower income. Lower-income households foster better meal-management because of food insecurity, while larger households have more people to eat the food.

Conversely, most wasteful households have higher incomes and employ healthy diets. That’s because high incomes didn’t necessitate detailed meal-management, while healthier diets were associated with fresh foodstuffs, which perish much quicker than packaged and processed foods.

“It’s possible that programs encouraging healthy diets may unintentionally lead to more waste,” Jaenicke noted. “That may be something to think about from a policy perspective — how can we fine-tune these programs to reduce potential waste.” 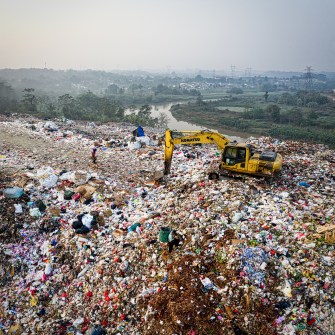 Billions of pounds of food end up in landfills where it produces vast amounts of greenhouse gases.(Photo: Tom Fisk/Pexels)

Americans certainly waste food, but individual households are hardly the only point of misuse in the country’s staggeringly inefficient food network.

Food loss occurs at every stage, from farm to dinner table. According to the USDA, Americans wasted 133 billion pounds of food at the retail and consumer levels in 2010 (the USDA’s baseline year). Similarly, the EPA averages the loss to be at 218.9 pounds per person.

For some perspective, you would have to hold a la Tomatina festival every day for 1,102 years to generate the amount of food waste produced in the U.S. in 2010 alone.

Worse, America’s food system prevents much of this wasted food from reaching the consumer’s hands, for either eating or throwing. Vast quantities go directly to a landfill or are plowed under despite being edible.

That’s because farmers and retailers believe U.S. consumers won’t likely purchase a peach that doesn’t meet a cosmetic, near Platonic ideal, of what a peach should look like. Feeding America estimates 20 billion pounds of fruit and vegetables meet such a fate each year.

“Our findings are consistent with previous studies, which have shown that 30% to 40% of the total food supply in the United States goes uneaten — and that means that resources used to produce the uneaten food, including land, energy, water and labor, are wasted as well,” Jaenicke said.

In addition to depleted resources, the study authors point out that wasted food exacerbates the current climate crisis. Rotting food produces the greenhouse gasses methane, carbon dioxide, and non-methane organic compounds — collectively called landfill gas. Because of this and other organic wastes, landfills have become the third-largest source of human-caused methane emissions in the U.S.

We Know What a Healthy Diet Is. Now Can We Stop Arguing …

Of course, the best way to reduce food waste and save money isn’t to forego healthy eating habits. It’s to develop more effective food management. Here are some ideas to help you out:

Plan store trips. Plan your meals a week in advance, and keep a running list of groceries you’ll need. Include quantities of food to prevent over-shopping.

Restaurant prudence. Schedule dinners out so food for meals isn’t forgotten in the fridge. Only order what you can eat. In restaurants known for excessive portions, request to have the meal split. Beware the buffet blitz.

Buy from bulk bins, not in bulk. Bulk bins allow you to purchase enough food to meet your needs and no more. Buying large amounts of products in bulk, however, results in neglected food. It may cost less per ounce to buy a wheel of cheese versus a smaller quantity, but it only saves money if the entire wheel is eaten before it spoils.

Understand dating definitions. What’s the difference between the “sell-by,” “use-by,” “freeze-by,” and “best-before” dates? Hint: Only the use-by date is safety-related and then only for infant formula. The others are recommendations for flavor and quality. The true indicators of spoilage are the odors, flavors, colors, and textures produced by bacteria and other microorganisms. For more information, visit the USDA’s webpage on food product dating.

Strategic food prep. Research best practices for storing different foods. For example, vegetables can be washed, dried, and chopped in preparation for their use in salads, but berries should be washed right before use. Also prepared meals that can be frozen for later eating, and develop a rotation system so the oldest foods are the first to be used.

Cook for fewer. Divide recipe ingredients by the number of diners. Keep leftovers and either schedule a leftover night or take them for lunch the next day. But don’t you dare reheat that salmon in the office microwave. Keep it at home.

Be creative. Stale bread can become croutons. Overripened bananas whipped up into banana bread. Leftovers resurrected as a whole new meal. Creative thinking can prevent a lot of food from ending up in the dump.

Compost. No amount of creativity will make coffee grounds palatable, but if composted, inedible food can go to better use. You can create your own compost or seek out a community program. Composting offers a better solution for other organic waste, too, such as fall leaves and grass clippings.

With these tips, we can begin to scrape back our share of the food and money wasted every year in American. As for the U.S. food network, the USDA and EPA have teamed up to reduce America’s food waste by 50 percent by 2030.

In terms of sheer productivity, “-gate” has no peer. Wikipedia’s list of -gates has over 260 entries.
Strange Maps

You Don’t Need To Modify Gravity To Explain Dark Energy