The Brazilian Amazon suffered a record number of fires in August, prompting international media stories and outcry on social media. Brazilian President Jair Bolsonaro — he is outspokenly pro-development and anti-conservation — has also been feeling the heat; several Brazilian governmental and scientific agencies have said the fires were encouraged by the president’s rhetoric, while French President Emmanuel Macron recently accused Bolsonaro of lying about his intentions to fight climate change.

But last week did yield some good news for the Brazilian Amazon: Ecosia, a search engine that donates some of its profits to tree-planting projects, saw a 1150 percent increase in downloads on Thursday as more people become aware of the fires, becoming the top-ranked iOS app in Brazil. The nonprofit, which already funds tree-planting projects in Brazil, said it’s planning to plant an additional one million trees in the nation.

“We had our team meeting and people were, on the one side, very happy because of the numbers but also very sad because of the forest fires,” Christian Kroll, Ecosia’s chief executive officer, told Business Insider. “So it’s both exciting and a tragic occurrence.” 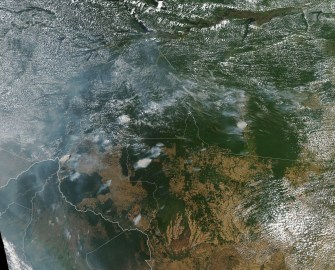 Like Google, Ecosia makes money selling advertising space on its web platform and mobile app. But unlike Google, this search engine doesn’t sell or track user data, and it donates 80 percent of its profits (or 47.1 percent of its total income) to tree-planting reforestation projects in countries such as Tanzania, Peru, Senegal, Kenya, and Brazil, to name a few. Ecosia, which is powered by Microsoft’s Bing, says it has planted more than 65 million trees to date since 2009.

At its current rate, Ecosia is planting a new tree every second across 21 international reforestation projects, according to its website. “Fifty million trees means 2.5 million tonnes of CO2 removed from the atmosphere,” Ecosia wrote in a blog post. “It means 60,000 hectares restored. And over 500 native tree species planted.”

We started planting trees in Brazil’s Atlantic Forest six years ago – and look at the difference #alternativesearch #switchtoecosiapic.twitter.com/vGxuDkbLza

A study published in July found that planting trees is, “by far — by thousands of times — the cheapest climate change solution” and the most effective, study co-author Thomas Crowther, a climate change ecologist at the Swiss Federal Institute of Technology in Zurich, told The Associated Press. Why? Trees, especially young trees, absorb carbon dioxide from the atmosphere — and a lot of it. Over a 40-year period, one tree can absorb as much as 1 ton of carbon dioxide. What’s more, trees help to restore biodiversity to deforested areas.

In contrast, destroying trees — as millions have been by the Amazon fires — can negatively transform regional habitats, as Vox’s Umair Irfan wrote in a recent story:

“The towering mahogany, kapok, and Brazil nut trees of the Amazon play important parts in the orchestra of the region’s water system.

The trees take in rainwater through their roots, move it up into the canopy, and release it into the air, a process called evapotranspiration. The trees also release volatile organic compounds that react to form tiny particles. These particles serve as nucleation points to form clouds and eventually lead to more rainfall.

Multiply this pattern by the hundreds of billions of trees in the rainforest and you get a powerful mechanism for recycling water and generating rainfall that keeps even the thirstiest of trees quaffed in hot tropical weather.”

Fortunately, satellite data showed that fire activity in most of the Brazilian Amazon had returned to normal or below-average levels on Tuesday.

Virgin birth – which involves the development of an unfertilised egg – has preoccupied humans for aeons. And although it can’t happen in mammals, it does seem to be possible in […]
Strange Maps

The “Euro Night Sprinter” map is utopian, but Europe’s rail future could look a lot like it.
Up Next
Health

What’s next for the nation’s opioid cases?