You don’t need eyes to see the massive fires raging in the Amazon. An infrared camera fitted on a satellite will do.

This movie, based on data collected from 8th to 22nd of August by the Atmospheric Infrared Sounder (AIRS) on NASA’s Aqua satellite, shows carbon monoxide (CO) levels at 18,000 feet (5.5 km) above South America.

The colours denote the density of carbon monoxide, from green (approximately 100 parts per billion by volume) over yellow (app. 120 ppbv) to dark red (app. 160 ppbv). Local values can be much higher. Each separate shot is the average of three days’ worth of measurements, a technique used to eliminate data gaps.

As the clip shows, the CO plume rises in the northwest part of the Amazon, a massive region covering Brazil’s western half. First it drifts further northwest, towards the Pacific Ocean; then, in a more concentrated plume, towards Brazil’s southeast.

CO (1) can persist up to a month in the atmosphere and can travel large distances. At the altitude shown in this clip, it has little effect on the air we breathe. However, strong winds can carry it down to inhabited parts, where it can impact air quality. 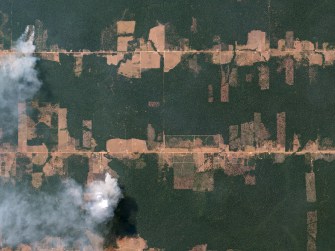 The rainforests of the Amazon are often called the ‘lungs of the planet’, because they absorb large amounts of CO2 and produce roughly one-fifth of the planet’s oxygen. In other words: one in every five of the breaths you take you owe to the Amazon.

But the Amazon’s respiratory function is impaired by deforestation, a process which continues on a massive scale, both in Brazil and worldwide. In 2018, the planet lost 30 million acres of tree cover (roughly the size of Pennsylvania). This included almost 9 million acres of rain forest (slightly more than the size of Maryland).

Thanks to efforts by Brazil’s previous administration, deforestation in the Amazon had slowed down to its slowest paces since records began; but a recession in 2014 again placed economic needs above ecological concerns. The pace of deforestation increased again and it has only accelerated since the election last year of Brazil’s new president, Jair Bolsonaro. 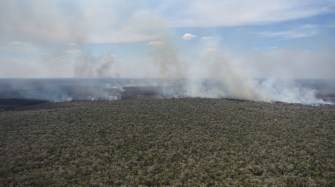 Mr Bolsonaro’s campaign pledge to open larger swathes of the Amazon for exploitation has emboldened local ranchers and farmers. From January to August this year, Brazil’s National Institute of Space Research identified more than 40,000 separate forest fires in the country – 35% more than the average for the first eight months of each year since 2010.

Few of these fires occur naturally: most are set in order to increase the land available for crops and pasture. As a result, the Amazon lost more than 850,000 acres of forest cover in the first half of this year alone. That’s 39% more than in the same period last year and represents an area the size of Rhode Island.

(1) Carbon monoxide (CO) is often confused with carbon dioxide (CO2). Both are gases without colour, smell or taste, both are formed by the combination of carbon and oxygen, both are released during combustion or fire, both can be lethal in high concentrations and both play a role in air pollution and climate change.

CO2 is a very common gas.

CO, on closer inspection, is quite different.

Environmental activists want us to feel “flight shame” if we can take a train, instead. But this isn’t entirely realistic, even in Europe.
Up Next
Starts With A Bang

Why Is The Sky Dark At Night?

The darkness of the night sky was a mystery for generations of humans. Here’s the reason why.From our perspective here in the Solar System, it makes absolute intuitive sense why we […]