As the forest fires in South America’s Amazon rainforest blaze on, concurrent disastrous fires are raging in large swathes of Central Africa and parts of Southern Africa.

One of the regions at risk is the Congo Basin forest, the second largest tropical rainforest in the world. The majority of the rainforest is in the Democratic Republic of Congo. The region absorbs a great deal of carbon dioxide and hosts rich and diverse animal and plant life.

NASA’s Moderate Resolution Imaging Spectroradiometer (MODIS) technology estimates that there are around five times as many fires burning in Africa than in the Amazon rainforest.

During the G7 summit, French President Emmanuel Macron tweeted about the current devastation running through the savanna and wondered aloud why the African fires weren’t getting as much air time or attention as the Amazon fires.

Currently, the individual blazes are confined to the savanna, but many experts fear that the flames could spread into close proximity with the Congo Basin and wreak havoc. The second-largest tropical forest makes up 500 million acres and is home to more than 2,000 species of animals and 10,000 species of plants. 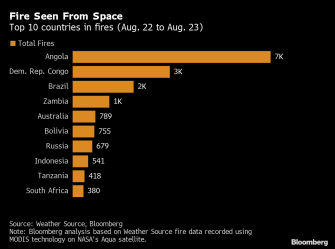 Many of these satellite maps give us cause for concern. Visually and statistically there are more fires engulfing Africa. NASA’s Fire Information for Resource Management Map (FIRMS) paints a disturbing picture of the African deluge at first glance. However, many of these fires are from controlled burns or brush fires, which are different that forest fires.

Indeed, while the deforestation and slash and burn tactics of African farming are environmentally reprehensible, fire experts caution against equally comparing the situation to catastrophe raging across Brazil and Bolivia. Lauren Williams, a forest expert at Global Forest Watch, believes that currently the situation is contained. Referencing the Global Forest Watch map, she finds that there’s been no real damage being done to the forest.

This said, there’s a stark difference between the fires engulfing the Amazon — they are consuming lush rainforests with flames — and those happening in the Congo. The fires in Central Africa consist are mainly raging across savannas and are mostly contained at the edge of the Congo Basin rainforest.

Correspondents stationed at CNN’s bureau in Lagos, Nigeria, have been told that data shows the number of fires could possibly be lower than normal yearly levels. In Central Africa, it’s typical for these types of ignitions to be lit during this time of the year. While some areas may self-combust during the dry season, the majority of the blame for the flames stems from slash-and-burn agriculture.

In South America, human-ignited burns initiated and eventually spread into sensitive areas of the Amazon rainforest. Forest manager with Greenpeace, Irène Wabiwa Betoko fears this could happen in Africa:

“If it catches the rainforest in the Congo Basin, it will be worse than in South America,” she said in an interview with The New York Times. “We are calling on governments to not be silent. Start acting now to make sure these fires are not getting out of control.”

Many of the furniture giant’s products are named after Swedish locations. Not everyone is happy about that.
Up Next
Hard Science

The real, true history of teleportation