There’s a reason the Amazon rainforest is referred to as the “Lungs of the World”: It accounts for 17 percent of the carbon dioxide absorbed by the world’s trees and produces 20 percent of the oxygen we breathe.

At the moment, though, the Amazon is on fire. This year alone, Brazil research agency INPE has recorded more than 73,000 fires there, an increase of 83 percent since just last year. And we’re still a month away from the peak of the area’s driest season, which doesn’t abate until November. As of last Thursday, August 22, there were about 2,500 active fires.

Climate experts are concerned the Amazon fires could be a harbinger, or even a trigger, of a “dieback” scenario. If so, the Amazon would no longer help offset climate change by absorbing greenhouse gas, but, instead, begin producing massive amounts of Co2 as it burns — this wouldn’t just make climate change worse, but it would cause the forest itself to become locked in a vicious cycle, where it becomes increasingly dry and more readily flammable.

Experts fear we may be entering such a vicious cycle and that it could accelerate into a doomsday scenario for humankind. 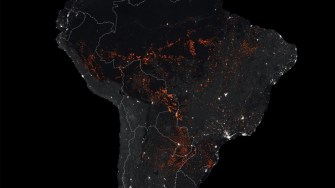 Why the Amazon is burning: Timber and meat

The prime driver for the historical deforestation of the Amazon has been the clearing of forests by loggers and the subsequent allocation of the naked land for cattle grazing in service of the global meat industry. Eating less meat is a strategic goal that the world needs to work toward more aggressively — starting, well, yesterday. The WWF asserts that 17 percent of the rainforest has been lost over the last 50 years, some 18.7 million acres per year at a rate of 27 soccer fields a minute.

Such clearing of trees opens up the forest canopy, drying out the understory and the edges of growth areas, according to a troubling essay in The Conversation. Its authors explain how “normally fire-proof rainforests become flammable.”

Prior to the recent surge in fires, rainforest destruction had been on the decline thanks to growing awareness of the Amazon’s importance — a PSA promoted by groups such as Save the Rainforest, as well as through stricter local regulations. However, it’s been picking up again lately. São Paolo got a wakeup call last week when a cold front, some clouds, and smoke from the burning turned day into night. 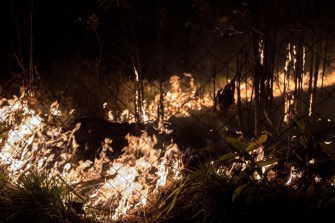 Why the Amazon is burning: Industrialization

The return to excessive rainforest exploitation is also a result of the ascension of Jair Bolsonaro to Brazil’s presidency. One of the current crop of climate-denying, right-wing politicians rising to powerful positions around the world, Bolsanaro campaigned on opening the Amazon to more farming and mining, and has been weakening environmental protections since taking office. His pro-development stance has reportedly emboldened Amazon farmers who use burning to clear tracts of land — a sizable portion of the current conflagrations is attributed to this practice. Bolsonaro has also been disturbingly clear in his negative view of the remaining indigenous tribes being displaced, and who once numbered in the millions.

Bolsonaro has also claimed that non-governmental organizations (NGOs) were setting the fires to embarrass him, though he later backtracked, claiming he had never accused the NGOs. According to Greenpeace, his government has gone so far as to block international aid intended to help put out the fires. In late August, he finally relented somewhat and sent the Brazilian military to the area to fight the blaze.

The fires in Brazil and the dispersal of their smoke.

Why the Amazon is burning: Climate change

The deliberate blazes set by Amazon developers, loggers, and farmers is unquestionably being aggravated by global climate change: The rainforest is drier now. There have been three “droughts of the century” lately, in 2005, 2010, and from 2015 to 2016. This feels alarmingly like the first phase of the dieback scenario.

Even without a dieback, a proliferation of fires may be the New Normal as the Earth heats up at an accelerating rate. While some advocate the planting of new trees as a way of slowing down the worsening of the situation, it’s obvious that we may eventually find ourselves providing more dry kindling.

According to images taken from satellites, the Amazonas state of Brazil is the most affected area, though Rondônia and Mato Grosso are also battling fires.

What you can do

Aside from watching from afar in horror, it’s difficult to know what to do. Charity Navigator has assembled a list of five of the best organizations to which you can contribute to help save and restore this area so critical to our own survival:

Tags
Amazonbig problemsbrazilclimate changefiresglobal issuesresourcessouth americasustainabilitytrees
In this article
Amazonbig problemsbrazilclimate changefiresglobal issuesresourcessouth americasustainabilitytrees
Related
The Future
5 of the most amazing cracked codes in modern history
From 260-year-old ciphers to the most recent Zodiac Killer solution, these unbreakable codes just needed time.
Strange Maps
Electricity generation by U.S. state
U.S. states vary radically in terms of electricity generation. Vermont is the cleanest, while Delaware is the dirtiest.
Strange Maps
Peak foliage map: where and when are leaves changing color?
Starting just about now, leaves start changing color from north to south, high to low, light to dark.
The Present
National parks are great. Now, let’s create a World Park
To preserve biodiversity and ecosystems, protected areas should be connected into a gigantic World Park.
The Present
Study: unintended consequences of affirmative action
A program in Brazil both helped and harmed. What can we learn from it?
Up Next
Starts With A Bang
Saturn, Not Earth Or Jupiter, Has The Largest Storms In Our Solar System
Jupiter’s Great Red Spot has been around for longer, but Saturn’s periodic storms are far larger.On Earth, hurricanes can span hundreds of kilometers, wreaking devastation whenever landfall occurs.In 2007, Hurricane Felix […]