The board game “Pandemic” tasks players with stopping deadly diseases as they spread across the world. But what separates “Pandemic” from its winner-take-all peers is that it’s a collaborative endeavor. Players either pull together to stamp out their microscopic foes, or they all lose.

Commentators have naturally drawn comparisons between the game and the COVID era it has become emblematic of, and those parallels have become more fitting lately. On September 21, the World Health Organization (WHO) announced that 156 countries had joined the COVAX Facility, a worldwide collaboration to develop a vaccine and distribute it strategically and equitably.

But as any “Pandemic” fan will tell you, there are always those players: the ones who cut ties with the others, who play to be the most powerful, who reinterpret the goal as domination in a zero-sum game of their own devising. Unfortunately for WHO and its allies, three big global players have refused to play cooperatively: China, Russia, and the United States.

Launched this April, the Access to COVID-19 Tools (ACT) Accelerator brought together a panoply of governments, scientists, businesses, and global health organizations with the goal of accelerating the development, production, and distribution of an efficacious COVID-19 vaccine. The “vaccines pillar” of this initiative is the COVAX Facility.

COVAX is coordinated by the WHO, the Coalition for Epidemic Preparedness Innovations (CEPI), and Gavi, the Vaccine Alliance. The program maintains a diverse portfolio of COVID-10 vaccines, monitoring each to identify promising candidates. It has also partnered with manufacturers to ease investment risks and serves as a purchasing pool for self-financing countries, while offering fundraising efforts to poorer ones.

“[G]overnments from every continent have chosen to work together, not only to secure vaccines for their own populations, but also to help ensure that vaccines are available to the most vulnerable everywhere,” Seth Berkley, CEO of Gavi, said in a release. “With the commitments we’re announcing today for the COVAX Facility, as well as the historic partnership we are forging with industry, we now stand a far better chance of ending the acute phase of this pandemic once safe, effective vaccines become available.”

In an interview with Vox, Berkley noted that the ACT Accelerator is the largest global collaboration since the Paris Climate Agreement. He added, “This type of solidarity is critical because otherwise what you’re going to end up with is just a constant reintroduction of infections and the inability to go back to normal.”

As of Monday, 64 higher-income countries and 92 low- and middle-income countries—representing nearly two-thirds of the world’s population—have signed commitments to COVAX. Thirty-eight more are expected to sign soon.

COVAX’s goal is to have 2 billion doses by the end of 2021. Experts estimate this amount will cover high-risk and vulnerable people, as well as healthcare workers, worldwide. Participating nations must cover those populations before administering vaccines according to national priorities. As part of the agreement, countries agree to support equal access to the vaccine once it becomes available, a move aimed at preventing hoarding and price gouging.

Currently, CEPI is supporting nine candidate vaccines, of which eight are in clinical trials.

Dr Tedros talks about the threat of vaccine nationalismwww.youtube.com

The United States is gambling that its bilateral deals with various pharmaceutical companies will win the “vaccine race.” This U.S.-only initiative, named (sigh) Operation Warp Speed, has already spent approximately $10 billion and is pushing to deliver 300 million doses by January 2021. Many experts worry this speedy push through the regulatory path could result in premature and dangerous approvals.

China and Russia have likewise bet on their own high-priced ponies. Russia is touting an unvetted vaccine nicknamed (double sigh) “Sputnik V.” This vaccine has only concluded phase 1 and 2 trials with a small number of participants, yet Russia claims to have already received international requests. Meanwhile, China has administered tens of thousands of doses of a vaccine before completing phase 3 clinical trials.

An additional barrier to the United States’ participation: COVAX is a WHO-led initiative. Earlier this year, President Donald Trump admonished the WHO as a corrupt organization and claimed it assisted China in covering up the coronavirus outbreak and its severity. Though he presented no evidence for the accusation, Trump has used it as the basis for his threat to cut ties with, and funding for, the agency.

“The United States will continue to engage our international partners to ensure we defeat this virus, but we will not be constrained by multilateral organizations influenced by the corrupt World Health Organization and China,” said Judd Deere, a spokesman for the White House, said in a statement.

He added, “This president will spare no expense to ensure that any new vaccine maintains our own FDA’s gold standard for safety and efficacy, is thoroughly tested, and saves lives.”

By shirking COVAX, these countries hope to gain peerless access to a vaccine. Each could secure large numbers of doses for its citizens while also reaping the political boons to follow. In the United States, President Trump has pinned his re-election bid on a timely vaccine, while Chinese officials seem posed to use a vaccine to repair diplomatic ties.

But the loss of such rich economies will prove a blow to COVAX and the ACT Accelerator. Vaccines are notoriously expensive and risky to develop; the costs to manufacture doses at scale will be immense. WHO Director-General Tedros Adhanom Ghebreyesus stated the ACT Accelerator would cost roughly $30 billion, and the final bill for the tools to combat novel coronavirus would be at least $100 billion. But that’s a pittance compared to the $10 trillion already spent on the pandemic so far. 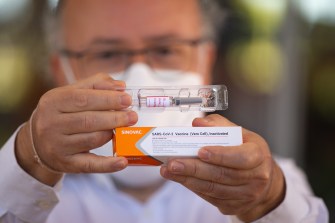 By COVAX’s count, there are 170 COVID-19 vaccines in development. None have been approved, few have reached phase 3, and most will fail to exit clinical trials. While one or two may be ready by year’s end, they probably won’t be a corona-cure-all. They will likely be similar to flu vaccines, reducing the contraction risk and the severity of symptoms.

“We all recognize that flu vaccine, in a year when it’s efficacious, you have what, 50% protection? And in a year when it’s poor you have 30% or less than that—and still we use that,” Marie-Paule Kieny, WHO assistant director-general of Health Systems and Innovation, told Stat.

That means any country to pass the approval finish line won’t necessarily win it all. After approval, it will still take a global effort to manufacture and distribute doses. Without blanketed protection, even countries with a high inoculation rate will risk reintroduction of the virus from those still struggling to contain it.

As any player of “Pandemic” will tell you, when a player decides to go it alone, they don’t just make the game more difficult. They diminish the trust and cooperation for many games to come.

To reap the benefits of digital technologies, we must contend with their addictive designs.

U.S. states vary radically in terms of electricity generation. Vermont is the cleanest, while Delaware is the dirtiest.
Up Next
Starts With A Bang

Starts With A Bang #61 — Astronomical Instruments And Injustices

Image credit: UKIRT / University of Hawaii Institute for AstronomyA far-ranging conversation about telescopes, what they do, and who they impact.When most of us think of astronomy, we think about two […]