Russia’s President Vladimir Putin announced on Tuesday, August 11 that his country was the first to approve a coronavirus vaccine, provoking skepticism from Russian and international scientists. Putin said the vaccine has met the Health Industry’s standards and was even tested on his own daughter. Others aren’t so sure, pointing to the lack of evidence from Russia and the seeming fact that the vaccine did not undergo the necessary phase 3 trials and was only administered to dozens of people. Such a sample is not enough to determine the vaccine’s effectiveness on a large scale, but the Russian authorities will start giving the vaccine to doctors on the virus frontlines first and move on to mass vaccination as early as October.

Putin, leading a country that has had almost 900,000 cases of COVID-19 by this point, stood by the vaccine’s effectiveness:

“I know it has proven efficient and forms a stable immunity,” said the Russian President. “We must be grateful to those who made that first step very important for our country and the entire world.”

Putin also claimed that the vaccine was tested on one of his daughters, sharing that the day of the first injection her temperature reached 100.4 degrees but then fell to a bit over 98.6 degrees the following day. The second shot also led to a slight fever. Overall, this resulted in the daughter developing a “high number of antibodies,” according to President Putin.

Russia’s own Association of Clinical Trials Organizations offered a note of caution, stating that “Fast-tracked approval will not make Russia the leader in the race, it will just expose consumers of the vaccine to unnecessary danger,” as reported by the Associated Press.

International scientists were also much more guarded with their optimism, pointing out that without a phase 3 trial, which usually engages tens of thousands of people and lasts months, you can’t truly tell if the vaccine is safe and works. By comparison, American vaccine trials require 30,000 people each during final stages. Several such studies are currently underway. 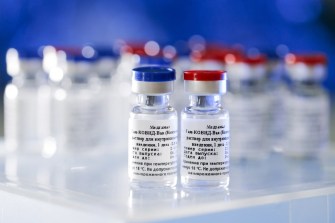 “The collateral damage from release of any vaccine that was less than safe and effective would exacerbate our current problems insurmountably,” he commented in a statement.

Rushing a vaccine can be damaging to the health of millions and contribute to the further spread of COVID-19 by fostering a false sense of protection. It can also erode trust in vaccines in the general population. 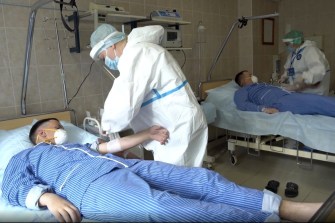 Medical workers draw blood from volunteers participating in a trial of a coronavirus vaccine at the Budenko Main Military Hospital outside Moscow, Russia.Credit: Russian Defense Ministry Press Service via AP

The developers of the Russian vaccine have used a technology that’s similar to what is being studied by other labs looking to stop the coronavirus spread – Oxford University, AstraZeneca, and China’s CanSino Biologics. This method involves modifying the adenovirus, which causes the common cold, to transport genes for the protein coating the coronavirus. This essentially prepares the body to spot a real COVID-19 infection if it comes.

The vaccine is being researched by the Gamaleya Institute in Moscow with help from Russia’s Defense Ministry. The goal of the vaccine is to provide immunity of up to two years.

Further trials of the Russian vaccine will begin shortly, with thousands of participants not just from Russia but the United Arab Emirates, Saudi Arabia, and the Philippines. Brazil might also participate.

Tags
biologycoronavirusepidemiologymedicinepublic healthrussia
In this article
biologycoronavirusepidemiologymedicinepublic healthrussia
Related
Life
Our antidepressant drugs are affecting animals and ecosystems
A toxicologist explains the impacts of antidepressants on fish — and no, they’re not getting any happier.
Health
New blood types are often discovered following medical disasters
New blood types are regularly discovered by an unusual absence or an unusual presence — both of which can result in tragedy.
Health
COVID, RSV and the flu: A case of viral interference?
Viruses, it turns out, can block one another and take turns to dominate.
Health
Chantix, Trulicity, Xeljanz, and most drugs advertised on TV are of “low therapeutic value”
Close to 70% of drugs advertised on TV offer little to no benefit over other cheaper drugs.
Health
New killer CRISPR system is unlike any scientists have seen
Once activated, the CRISPR-Cas12a2 system goes on a rampage, chopping up DNA and RNA indiscriminately, causing cell death.
Up Next
Strange Maps
Want a company that lasts? Start a bank or a brewery
Maps show the oldest company in (nearly) every country – and a few interesting corporate trends.