At a time when a majority of Americans worry over climate change, politicians and the fossil-fuel industry continue to drag their feet over regulating human-made greenhouse gases. The Fourth National Climate Assessment, released last November, warned that unrestrained climate change would devastate the economy and threaten American safety. President Donald Trump’s response? “I don’t believe it.“

He went on to tell reporters, “So I want clean air, I want clean water, very important.” Of course, he meant clean air and water for the American people, not just himself. Right, Mr. President? So… tacit agreement, then?

Regardless of President Trump’s dismissal, reality, to paraphrase Philip K. Dick, doesn’t go away because you stop believing in it. Just ask researchers at NASA and the National Oceanic and Atmospheric Administration (NOAA). 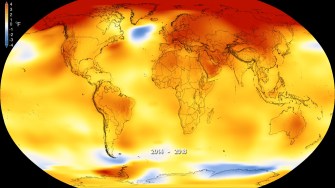 Not only was 2018 the fourth hottest, it added yet another year to global warming’s trending tradition. Collectively, the past five years were the warmest in the record’s 139-year history (2016 was the hottest ever). And 2018 was the 42nd year in a row sporting an above-average temperature, a streak that began in 1977.

“We’re no longer talking about a situation where global warming is something in the future,” Gavin A. Schmidt, director of the Goddard Institute for Space Studies, told the New York Times. “It’s here. It’s now.”

Scientists have long warned that climate change will incur heavy costs on lives and economies the world over — costs we’re already paying.

Regarding weather and climate disasters, 2018 proved the fourth costliest year for the U.S. since 1980 (when records began). Fourteen inclement weather events amassed an economic toll of $91 billion, with Hurricane Michael’s $25 billion bill expending the most. These disasters also took at least 247 lives and grievously injured many more. 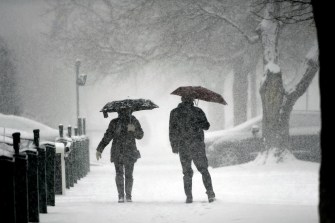 Some may argue that blizzards and deep freezes disprove global warming and climate change, but to do so is to confuse the weather with the climate. Photo credit: Joe Amon/MediaNews Group/The Denver Post via Getty Images

Weather aficionados may remember another tidbit weather news: April of last year was the United State’s coldest in 20 years. It’s true. April 2018 was particularly chilled, thanks to an Arctic air engulfing many central and eastern states. Because of this and other factors, for the contiguous United States, 2018 would only be the 14th warmest year.

But climate change is a global problem. While the United States had an overall wet year, Australia continues to suffer horrible drought and rainfall deficiencies. Other countries that set record land temperatures include Russia, much of Europe, and parts of the Middle East.

As such, pointing to April’s record lows to disregard global warming is to confuse today’s weather with climate change. As the website Skeptical Science points out, “Weather is chaotic, making prediction difficult. However, climate takes a long-term view, averaging weather out over time. This removes the chaotic element, enabling climate models to successfully predict future climate change.”

While April was a chaotic month of blizzards for much of the United States, overall and across the world, climate change models for 2018 proved accurate. 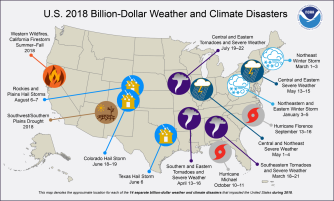 This map shows the 14 weather disasters that struck the U.S. last year. Their total cost amounted to $91 billion, and they took at least 247 lives.

How certain are scientists that humans are responsible for climate change? As certain as they are that cigarettes cause lung disease. That is, extremely certain.

According to an American Association for the Advancement of Science 2014 report, 97 percent of climate scientists agree that climate change is human caused. As stated in that report:

“The science linking human activities to climate change is analogous to the science linking smoking to lung and cardiovascular diseases. Physicians, cardiovascular scientists, public health experts, and others all agree smoking causes cancer. And this consensus among the health community has convinced most Americans that the health risks from smoking are real. A similar consensus now exists among climate scientists, a consensus that maintains that climate change is happening and that human activity is the cause.”

Yet, like the tobacco industry before, climate deniers continue to campaign hard against this scientific reality. The government continues to place people like oil lobbyist and climate denier Jim Inhofe in important environmental positions. Think tanks put out reports downplaying climate change, while “consistently conceal[ing] their sources of funding and final interest,” as one study found. The fossil fuel industry has engaged in a decades-long disinformation campaign to gaslight the American people and will likely increase fossil fuel production.

“In short, [they] have marketed and sold their lethal product with zeal, with deception, with a single-mind focus on their financial success, and without regard for the human tragedy or social costs that success exacted,” wrote U.S. District Judge Gladys Kessler of the District of Columbia.

Judge Kessler wasn’t writing about climate change, politicians, or fossil fuel companies. This quote comes from a 1,652-page opinion about tobacco companies’ attempts to silence the scientific consensus that smoking causes cancer and dissuade the public from the findings.

One wonders if the future holds a similar statement aimed at today’s leaders, policymakers, and heads of industry.

We want to fight invasive species. But to wage a war, you have to know who your enemy is.
The Past

For centuries, the only way to travel between the Old and New World was through ships like the RMS Lusitania. Experiences varied wildly depending on your income.
Up Next
The Present

Despite tens of millions of dollars pouring into new technologies, a ‘clean’ burger remains elusive.