Harvard University researchers were given permission by the Swedish Space Corporation to carry out a test next year that may lead to releasing artificial particles into the air to partially block out the sun. This approach could potentially reduce global warming and cool our planet, but has raised geoengineering concerns among environmentalists.

The Harvard test would involve a balloon being flown about 20km (12 miles) above the Arctic town of Kiruna in Sweden next June. The balloon’s gondola would be packed with 600 kg of scientific equipment and the purpose of that flight would be to try all of it out, especially the communications gear. If the test is successful, it may lead to another test in the fall of 2021 or in spring of 2022. At that point, a small amount (up to 2kg) of the non-toxic calcium carbonate would be released into the atmosphere, reported Alister Doyle of the Thomson Reuters Foundation. The goal of dispersing what is essentially chalk would be to see if these particles could reflect the sunlight and thus reduce the Sun’s harmful effects.

Supporters of solar engineering think technological solutions may be found to counter rising temperatures but their ideas have also faced pushback, admitted David Keith, who takes part in the project and has professorships in both applied physics and public policy at Harvard.

“There are very many real concerns” about the risks of climate change and solar geoengineering, said Keith,” adding “Understanding them requires a range of activities including experiments.”

The opponents of the idea see pitfalls in climate engineering and artifical sunshade projects. There are too many risks and unpredictable domino effects. Attempting to mitigate the effects of global warming through geoengineering obscures the necessity of moving away from fossil fuels and carbon-based economies, argue the critics.

Environmental policy expert Lili Fuhr of the Heinrich Böll Foundation in Germany described the Harvard test as “crossing an important political red line” and thinks the small experiment will lead to larger and more dangerous ones. She believes the plan may be in violation of a UN moratorium on geoengineering, which is non-binding. 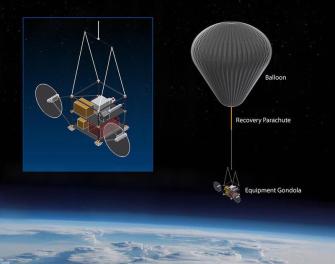 The leaders of the Harvard project, dubbed the Stratospheric Controlled Perturbation Experiment (SCoPEx), downplayed any concerns and explained that they are complying with all regulations . The conspiracy-minded will be happy to find out that while not only 300 or so stratospheric balloons were launched around the globe in 2019, among the backers of SCoPEx is none other than the Microsoft founder Bill Gates.

While the approaches to dealing with it remain varied and debated, global warming has been linked to a variety of increasingly more severe weather effects, from heat waves to stronger hurricanes and catastrophic flooding, as well as the worsening spread of illnesses, greater pollution, economic inequality, and the accelerating extinction of wildlife. And in a sign that things aren’t magically going to get better, the Intergovernmental Panel on Climate Change (IPCC), comprised of over 1,300 scientists from the United States and other countries, predicts the temperatures around the world will rise by 2.5 to 10 degrees Fahrenheit over the next century, bringing all matter of new calamity. Despite this being a global problem, countries that prepare and adapt accordingly will fare the best in the coming years.

Tags
climate changecosmosearth scienceenvironmentharvard universityinnovationsolar energyspaceSpace & Astrophysicstechnology
In this article
climate changecosmosearth scienceenvironmentharvard universityinnovationsolar energyspaceSpace & Astrophysicstechnology
Related
Starts With A Bang
Ask Ethan: What are white holes, and do they really exist?
In General Relativity, white holes are just as mathematically plausible as black holes. Black holes are real; what about white holes?
Life
Strange life forms create an “alien” ecosystem in an abandoned uranium mine
Slimy biofilms made up of bacterial and eukaryotic life forms have taken over an abandoned, flooded uranium mine in Germany.
Hard Science
Earth has an eerie “sodium glow,” and astronomers use it to image stars
Air currents in our atmosphere limit the resolving power of giant telescopes, but computers and artificial stars can sharpen the blur.
The Future
Space travel will radically change human psychology and spirituality
We are traveling in a realm that once exclusively belonged to the gods. Space travel will force humanity to rethink everything.
Starts With A Bang
The good reasons scientists are so hostile to new ideas
Many people out there, including scientists, claim to have discovered a series of game-changing revolutions. Here’s why we don’t buy it.
Up Next
Starts With A Bang
Why Is Asteroid Dust So Black?
And what can it teach us about our Solar System’s earliest days?In many ways, astronomy is unique among the sciences. In every other field, you have the ability to design an […]