In March 1991, the second-largest volcano eruption of the 20th century occurred at Mount Pinatubo in the Philippines. The blast proved toxic to the environment and deadly to hundreds of people in the area.

But its most far-reaching effect was the projection of some 20 million tons of sulfur dioxide into the stratosphere, where the particles reacted with water and eventually spread over the entire planet, creating a hazy layer that absorbed and scattered incoming sunlight. This resulted in spectacular sunsets, extraordinarily cold winters and wet summers, and, importantly, the cooling of the planet by about 1 degree Fahrenheit.

Now, a group of researchers at Harvard plan to mimic that effect in a new experiment designed to illuminate how scientists might someday use geoengineering technology to curb climate change. The project, called Stratospheric Controlled Perturbation Experiment (SCoPEx), involves sending a steerable balloon into the stratosphere, about 20 km above ground, and releasing small particles of chalk, or calcium carbonate. 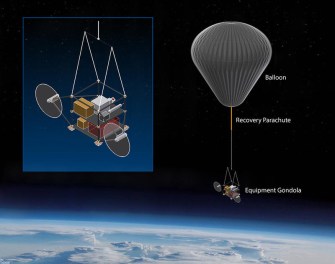 Once released, the balloon will stick around for 24 hours to measure changes in aerosol density, atmospheric chemistry and light scattering in the area covered by the tiny particles, about 1 km by 100 meters.

The team hopes to learn more about the efficacy and risks of solar geoengineering, which aims to reflect some of the sun’s light back into space. 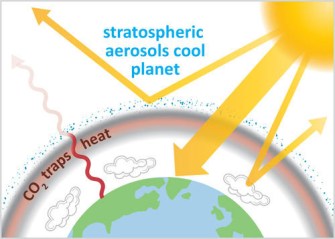 “Computer modeling and laboratory work tell us some very useful things about solar geoengineering, but as with all other aspects of environmental science, computer models ultimately rest on observations of the real environment,” they wrote on the project website. “Measuring the ways that aerosols alter stratospheric chemistry can, for example, improve the ability of global models to predict how large-scale geoengineering could possibly disrupt stratospheric ozone.”

Two common proposals to combat climate change include carbon sequestration — capturing carbon and storing it in the earth’s crust — and reducing global use of fossil fuels. However, both would be wildly expensive, even considering that the estimated costs of mass-scale carbon sequestration have dropped in recent years.

Solar geoengineering could prove to be a much cheaper option. The recent Intergovernmental Panel on Climate Change (IPCC) report estimated that releasing particles into the stratosphere could offset 1.5 °C of warming for just $1 billion to $10 billion per year.

The main concern is that we still don’t really understand exactly how creating a hazy particle blanket over the planet would affect weather patterns, droughts and agriculture. After all, the 1991 Mount Pinatubo eruption is thought to have influenced the 1993 floods along the Mississippi River and the drought in the Sahel region of Africa.

But the hope is that experiments like SCoPEx, which is set to begin in 2019, can reflect some light on the viability of solar geoengineering.

Tags
climate changeinnovationsciencesolar energy
In this article
climate changeinnovationsciencesolar energy
Related
The Well
Can we condition ourselves to be heroes?
Neuroscientist Robert Sapolsky on the science of temptation, and the limitations of your brain’s frontal cortex.
▸
6 min
—
with
Robert M Sapolsky
The Future
How a device transmits radio waves with almost no power
Apart from the energy needed to flip the switch, no other energy is needed to transmit the information.
The Present
How heat pumps of the 1800s are becoming the technology of the future
Innovative thinking has done away with problems that long dogged the electric devices — and both scientists and environmentalists are excited about the possibilities.
The Present
How California could save its rain instead of letting it drain into the ocean
Why can’t more rainwater be collected for the long, dry spring and summer when it’s needed?
Hard Science
Scientists use laser beam to divert lightning strikes
Laser-guided lightning systems could someday offer much greater protection than lightning rods.
Up Next
The Present
A world first: Luxembourg’s public transport to be free for all
Luxembourg will offer the world’s first fare-free public transit system, but is there really such a thing as a free ride?