But while the consequences of the storm are evidence, its causes are more of a mystery. In the context of climate change, the recent weather raises an obvious question: If the climate is warming, why are some parts of the world experiencing bouts of extreme cold?

It’s a topic climate scientists have been exploring for years.

One idea centers on the pattern of cold air above the Arctic Circle. This pattern, known as the polar vortex, is an area of cold, low-pressure air that swirls in the stratosphere above Earth’s North and South poles. When it’s strong, the polar vortex spins in a regular pattern, with the jet stream serving as a barrier that keeps cold air contained in the north.

But warm weather can disrupt this system. When temperatures rise, the jet stream weakens and becomes wobbly, sometimes allowing cold air to shoot out across the planet. What may be contributing to disruptions in the polar vortex is a phenomenon called Arctic amplification, which describes how the Arctic has warmed by more than twice the global average in recent decades. 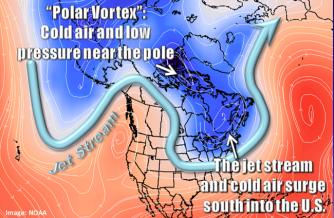 Although some studies suggest relationships between the warming Arctic and increased winter storms, scientists still aren’t exactly sure how Arctic climate change might be reshaping winters around the world. For example, the polar vortex is a natural phenomenon, and so some of its fluctuations could be attributed to natural variability. What’s more, other factors, like changes to Arctic atmosphere and sea ice, might also play a role. 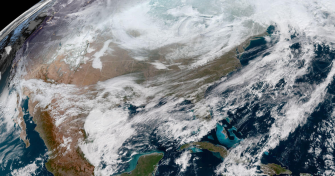 Given the complexity of climate systems, it’s difficult for scientists to determine how changing temperatures in one region may affect weather patterns in another. But that’s not to say they’re all in complete disagreement. A 2020 paper published in Nature, for example, commented on the “divergent consensuses” between various observational and model studies on the topic of Arctic warming and severe winter weather.

“The divide on the influence of Arctic change has contributed to the impression that this research topic is controversial and lacking consensus,” the authors wrote. “An alternative interpretation is that the wide range of results should be expected, owing to the varying approaches to studying the problem and the complexity and intermittency of Arctic/midlatitude connection.”

While scientists continue to study the relationship between the Arctic and weather patterns across the globe, other climate trends are relatively clear.

The average surface temperature of the planet has risen about 2.12 degrees Fahrenheit since the late 19th century, warming at a rate nearly 10 times faster than the planet did after the Ice Age, according to NASA. And despite warmer temperatures, the NOAA reports that the U.S. was hit by nearly twice the amount of extreme winter storms during the later half of the 20th century than the first.

Tags
climate changeCurrent Eventsearth scienceenvironmentglobal warmingHard Sciencescienceweather
In this article
climate changeCurrent Eventsearth scienceenvironmentglobal warmingHard Sciencescienceweather
Related
Life
Strange life forms create an “alien” ecosystem in an abandoned uranium mine
Slimy biofilms made up of bacterial and eukaryotic life forms have taken over an abandoned, flooded uranium mine in Germany.
Hard Science
Earth has an eerie “sodium glow,” and astronomers use it to image stars
Air currents in our atmosphere limit the resolving power of giant telescopes, but computers and artificial stars can sharpen the blur.
The Present
Climate change is altering the chemistry of wine
Smoke taint from wildfires is gross, even to wine amateurs.
Life
Our antidepressant drugs are affecting animals and ecosystems
A toxicologist explains the impacts of antidepressants on fish — and no, they’re not getting any happier.
Hard Science
The violence of the Tonga eruption is a wake-up call to watch other submarine volcanoes
Out of sight, but not out of mind.
Up Next
Smart Skills
4 tips for college students to avoid procrastinating with their online work
More than 70% of college students procrastinate