Amani Al-Khatahtbeh is the founder and editor-in-chief of MuslimGirl.com, the #1 Muslim women’s blog in the United States. She regularly provides commentary on social, cultural, and political issues on outlets[…]
Go to Profile 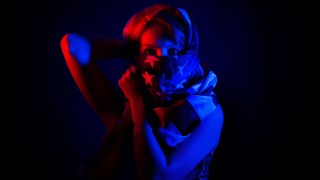 The media and politicians in the west are playing a dangerous game of word association, says founder and editor-in-chief of muslimgirl.com Amani Al-Khatahtbeh. In fact, it’s not so much a game as it is the dehumanizing of an entire population. By linking terrorism with Islam, and Islam with terrorism an impossible generalization is forged in the public consciousness that is extremely dangerous. It incites hate within institutions and within individuals, from the largest scale to the smallest.

There is not just one kind of terrorist. Al-Khatahtbeh’s definition is simple: a terrorist is anyone who incites terrors. Mass shooters, who are overwhelmingly white males, are terrorists but they are not the image that comes to mind when the word terrorist is spoken or written. It’s a painfully selective term, applied only to people with brown skin or of the Islamic faith.

Imagine if the future president of the United States proposed a registry for all white males. Is it conceivable? And yet that’s exactly what’s on the table for America’s approximate 3.3 million Muslims. Just 12 months ago, Al-Khatahtbeh could never have imagined that a Muslim registry would be discussed as a serious policy, and to watch it harden, set and become part of quasi-normal political discourse is in her view obscene. “If we don’t stand up and recognize what’s taking place right now then it’s a slippery slope and it honestly is very terrifying to imagine where else it could lead,” she says.

Amani Al-Khatahtbeh’s book is Muslim Girl: A Coming of Age. Amani Al-Khatahtbeh: To me terrorist means a person who incites terror. It's very simple. I think that Isis fighters are terrorists just as much as I believe that white mass shooters are terrorists. However, in the media's definition of terrorism the word is only ever applied when it comes to a brown person or a person of Muslim faith. And a person is only ever identified for their religion when it comes to a terrorist attack if they happen to be Muslim. And when we do that inevitably we are linking terrorism with Islam and Islam with terrorism and we make this common assumption that all Muslims are terrorists or that all terrorists are Muslim. And that, of course, is an impossible generalization it to make.

When you put into perspective that there are 1.8 billion Muslims on the planet it is impossible to say that they're all terrorists and it's actually a very dehumanizing thing to try to categorize them in that way. To put that into context there are 2.2 billion Christians in the world so you have a 2.2 billion Christians and 1.8 billion Muslims. So just as ridiculous it would be to make one assumption or one generalization about the entire Christian population that's just as ridiculous as it would be to make that assumption about the entire Muslim people. And yet when you ask a common American on the street what they think of when they hear the word terrorist, of course, the first image that comes to mind will be of the stereotypical person of Muslim faith.

And, of course, that is extremely dangerous. Like there was a situation a couple of years ago that is still a tremendous source of anxiety Muslim women today and that was when a Hindu man was pushed off of the platform on the subway onto the tracks of an oncoming train and was killed. And the woman that did so said that she's hated Muslims every since 9/11 happened. So let's think about that for a second. This woman hated all 1.8 billion Muslims in the world because 9/11 took place. And then her stereotypical image of what Muslims look like, you know, having brown skin, being dark, in that she ended up pushing a Hindu man, a man of a completely different faith to his death. That's how bad racism is. That's how this surfaces in our everyday lives just through media representation alone. Through the way that we depict Muslims on TV or minorities in general we're literally engineering a reality and it's us that have to bear the burden of that. We're the ones that that directly impacts. And it's very unfair for us to try to implicate an entire people for individual actions.

I think it's crucial for us to talk about terrorism in all of its forms and not confine it to this frame of just being in the context of radical Islam or the war on terror. That's a huge disservice. Especially when you look at the statistics that many times more people have died on American soil since 2001 due to mass shootings than to terrorist attacks, it really makes you wonder where our attention is really being placed right now. Especially because Donald Trump, for example, had no problem saying that we need to ban all Muslims immigration because of terrorism, because of like this and that. Meanwhile if we use the same logic then we should be able to say that we want to ban all white men from the country because they make up the majority of mass shooters that are spilling all this blood on our soil but no one ever talks about that. However, it seems like it's common sense when it's applied just to Muslims but that's just how ridiculous it is.

This discussion about a registry for Muslims has been something that I've had tremendous difficulty wrapping my head around just because of how ludicrous it is and just how blatantly obvious it is that it's wrong that seems to just like fly over people's heads and it has made me try to understand how people can think that this is okay. Historically it's only ever been in moments of tremendous fear like this that we have allowed our government to oppress its own citizens or to rob people of their rights or to impose on their civil rights that they're entitled to constitutionally. And that's always empowered by a social attitude of acceptance, not even just acceptance but maybe even complete apathy of people not caring how that impacts not just our fellow Americans, other human beings, but also just what that means for us as a country of what we stand for.

It's quite simple to understand why a Muslim registry is wrong. Any type of targeting of a person for their religion, for the color of their skin, for their sexual orientation, their gender, their background is wrong. And for us to create a registry of people solely because of their religion that literally is exactly identical to Nazi Germany. That's exactly how the holocaust started. And the thing is every since the holocaust we as humanity have constantly asked ourselves how could we have allowed something like that to happen? How did people in Europe allow millions of people get burned it to their death and not to say anything and just be completely okay with that taking place? And now with what's taken place in America and seeing the attitudes that people have towards these terrifying policy suggestions just makes it very obvious how something like that could happen and how it could easily repeat itself in history.

It's through complete apathy, through allowing, through empowering that type of ignorance and yeah knowing that we don't understand about an other people and not caring about seeking that understanding or backing policies that impact them or target them specifically without having any information about them or any type of awareness of what that policy means to us on a national level. I think that that's kind of a reality that has been exploited by our politicians today. They have ridden on this misunderstanding and this ignorance in order to empower their own platforms and those platforms have come on the backs of people that are already marginalized and that are already bearing the brunt of all this hateful discrimination and stereotyping that's been taking place. And I think that we have to put a stop to it. If we don't stand up and recognize what's taking place right now then it's a slippery slope and it honestly is very terrifying to imagine where else it could lead. Because a year ago I never imagined that we would even be entertaining a conversation about a Muslim registry, and now it's actually something that's being considered as a real policy and that to me is just obscene.

Motivation vs Inspiration: Why You Need to Know the Difference