It takes an independent mind to declare oneself an anarchist, but even so, the stories and characters of people who identify as anarchists can be surprising. Here’s five snapshots of different anarchists, each with a different take on the controversial political philosophy and different experiences. As a quick note, this list is in no way meant to be exhaustive; there are many more influential, controversial, famous, and infamous anarchists out there other than those described here. 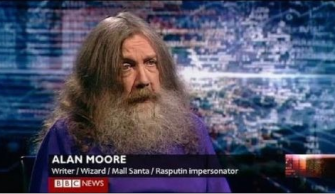 Known for his influential graphic novels like Watchmen and forbeing a practicing magician, Alan Moore is also a self-professed anarchist. Here’s his position:

[…] it seems to me that anarchy is the state that most naturally obtains when you’re talking about ordinary human beings living their lives in a natural way. It’s only when you get these fairly alien structures of order that are represented by our major political schools of thought, that you start to get these terrible problems arising—problems regarding our status within the hierarchy, the uncertainties and insecurities that are the result of that. […] It seems to me that the idea of leaders is an unnatural one that was probably thought up by a leader at some point in antiquity; leaders have been brutally enforcing that idea ever since, to the point where most people cannot conceive of an alternative.

Coming from the author of V for Vendetta, this political position should not be surprising. For the unfamiliar, V for Vendetta takes place in a future, fascist Britain, where the eponymous V — decked out in a cloak and Guy Fawkes mask — stages a revolutionary campaign through a series of bombings to bring down the fascist state and establish an anarchist society he calls “The Land of Do-as-You-Please.”

As for the cinematic version of V for Vendetta, Alan Moore was displeased by how the dichotomy between fascism and anarchy had been bled out of his story: “Those words, ‘fascism’ and ‘anarchy,’ occur nowhere in the film. It’s been turned into a Bush-era parable by people too timid to set a political satire in their own country.”

As for whether Moore believes that V’s approach to anarchy is the correct one, he had this to say: “I really don’t think that a violent revolution is ever going to provide a long-term solution to the problems of the ordinary person. I think that is something that we had best handle ourselves, and which we are most likely to achieve by the simple evolution of western society.” 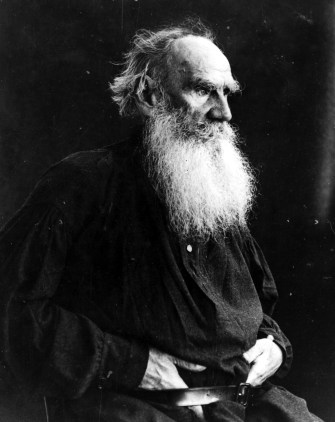 The author of War and Peace and The Kingdom of God Is Within You is widely regarded as among the greatest writers of all time. In his middle age, Tolstoy suffered an existential crisis, questioning whether God exists and, in turn, whether life had meaning. He wrote his way through this crisis in The Confession, and afterward became a Christian anarcho-pacifist.

In his piece On Anarchy, Tolstoy wrote

The Anarchists are right in everything; in the negation of the existing order and in the assertion that, without Authority there could not be worse violence than that of Authority under existing conditions. They are mistaken only in thinking that anarchy can be instituted by a violent revolution. […] This alone is needed, will certainly be successful. And this is the will of God, the teaching of Christ. There can be only one permanent revolution — a moral one: the regeneration of the inner man.

His faith led him to believe that all government was inherently violent and all violence inherently un-Christian. Because of this radical fusion of politics and religion, the Russian Orthodox Church excommunicated him in 1901. 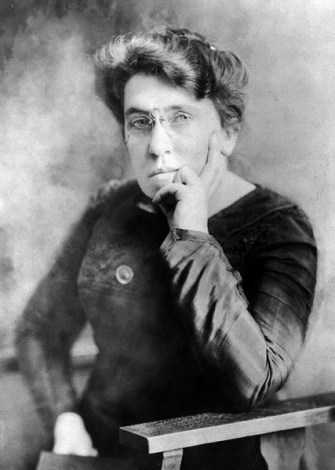 Easily one of the most famous and influential anarchists, Emma Goldman was unlike the others on this list thus far due to her advocacy for violence — violence was highly antithetical to Tolstoy’s version of anarchy, and, although Alan Moore may cast evil spells on people, Moore also rejects anarchist violence.

Goldman initially became attracted to anarchy after the Haymarket Affair, an at-first peaceful demonstration of laborers striking for an eight-hour workday in Chicago. However, somebody threw a bomb at police officers during the strike, and eight anarchists were later arrested. Their trial, however, is widely believed to have been a miscarriage of justice: none of the accused had thrown the bomb, though there was some evidence that one of them had constructed it; the judge and jury were both prejudiced against the defendants because of their political views; and, as a result, most of the anarchists were sentenced to death despite it being unclear which were actually guilty. Two had their sentences commuted to life in prison, one was sentenced to 15 years hard labor, and another committed suicide.

In response to this event, Goldman affirmed her beliefs in anarchy and in the use of violence to establish an anarchical society, the so-called propaganda of the deed. Given her use of violence, an interesting quote from her essay, Anarchism and Other Essays, is

[…] Anarchism represents to the unthinking what the proverbial bad man does to the child, — a black monster bent on swallowing everything; in short, destruction and violence. Destruction and violence! How is the ordinary man to know that the most violent element in society is ignorance; that its power of destruction is the very thing Anarchism is combating? Nor is he aware that Anarchism […] destroys, not healthful tissue, but parasitic growths that feed on the life’s essence of society. It is merely clearing the soil from weeds and sagebrush, that it may eventually bear healthy fruit.

In an attempt to destroy the “parasitic growths that feed on the life’s essence of society,” Emma Goldman and her friend Alexander Berkman plotted to assassinate industrialist Henry Clay Frick in retribution for his treatment of some of his striking workers during the Homestead Strike — Frick had hired the Pinkertons to violently end the strike, resulting in several deaths. Frick, however, survived the assassination, and Goldman and Berkman were sentenced to jail. 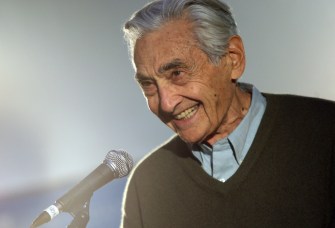 Best known for his seminal A People’s History of the United States, historian Howard Zinn is also an anarchist. In a 2008 interview called Anarchism Shouldn’t Be a Dirty Word, Zinn said this:

The term anarchism has become associated with two phenomena with which real anarchists don’t want to associate themselves with. One is violence, and the other is disorder or chaos. The popular conception of anarchism is on the one hand bomb-throwing and terrorism, and on the other hand no rules, no regulations, no discipline, everybody does what they want, confusion, etc. That is why there is a reluctance to use the term anarchism. But actually the ideas of anarchism are incorporated in the way the movements of the 1960s began to think.

He went on to describe how many of the civil rights movements were anarchist in nature, such as the Student Nonviolent Coordinating Committee (SNCC), which participated in nonviolent, direct-action protests to secure African-American rights. Zinn’s position was mainly that anarchist violence is counter-productive, though he has said that he is “not an absolute pacifist, because I can’t rule out the possibility that under some, carefully defined circumstances, some degree of violence may be justified, if it is focused directly at a great evil.” Rather than use violence to achieve an anarchist society, Zinn believed that:

Each situation has to be evaluated separately, for all are different. In general, I believe in non-violent direct action, which involve organizing large numbers of people, whereas too often violent uprisings are the product of a small group. If enough people are organized, violence can be minimized in bringing about social change. 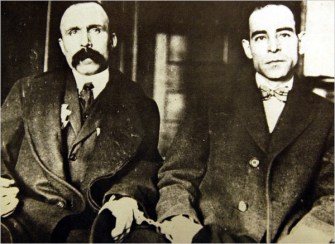 Although these are two people, their histories are very much intertwined. Nicola Sacco and Bartolomeo Vanzetti were two Italian immigrants in Boston who belonged to Gruppo Autonomo, an anarchist group committed to the violent overthrow of the government.

In 1920, two men were shot and killed carrying $15,000 in payroll money for a shoe factory in South Braintree. Sacco and Vanzetti, who were connected to the Buick that was used as the getaway car and owned guns, were accused of the crime.

Whether Sacco and Vanzetti were guilty of the crime is unclear today. It seems likely that, given later ballistics evidence, Sacco had probably shot one of the men, but no evidence existed to establish Vanzetti’s guilt. Another criminal also confessed to the murder, the money was never recovered, and both Sacco and Vanzetti had alibis. What is widely understood, however, is that their trial was poorly mismanaged.

Judge Webster Thayer despised anarchists, going so far as to call Sacco and Vanzetti “anarchist bastards.” The prosecution put on 45 witnesses with conflicting testimony, while witnesses who established Sacco’s and Vanzetti’s alibis were ignored. Anti-immigrant sentiment was high at the time, and after a few hours of deliberation, the jury sentenced both men to death. Supreme Court Justice William Douglas would later write that anybody reading the courtroom transcript “will have difficulty believing that the trial with which it deals took place in the United States.”

Tags
capitalismeconomicsgovernmenthistorypoliticssocial change
In this article
capitalismeconomicsgovernmenthistorypoliticssocial change
Related
Strange Maps
The horrors of World War II air war, in one stark map
This graph shows how badly German cities were hit by Allied bombing raids.
High Culture
Why are flood myths so common in stories from ancient cultures around the world?
Could the prevalence of flood myths around the world tell us something about early human migration or even the way our brains work?
The Past
The Wild West was lawless and chaotic — and the police helped keep it that way
Lawmen and outlaws were often the same people.
Thinking
6 great philosophers and how they used their political power
Most philosophers merely contemplate the world, but what about the ones who actually tried to change it?
The Past
Ancient migration: Bering Strait land bridge from Asia to North America was not a one-way road
Ancient humans crossed the Bering Strait land bridge from Asia into North America. But some of them went back.
Up Next
The Past
Found: Kweneng, a pre-colonial city in South Africa
Hi-tech imaging again reveals a hidden chapter of human history.