It’s difficult to find a book more eclectic, violent, provocative, and incendiary than the Anarchist Cookbook. It’s a bizarre instruction manual that covers a wide array of topics whose only connection is that they are often illegal and dangerous. Broadly, the book covers four areas: drugs; electronics, sabotage, and surveillance; natural, nonlethal, and lethal weapons; and explosives and booby traps.

Since it was first written in 1971, much of its information is out of date. But some topics, like how to make improvised bombs, don’t have an expiration date. The book provides instructions for making LSD and teargas, primers on how to operate various firearms, how to sabotage different kinds of infrastructure, and writing on anarchist philosophy.

The book was written by William Powell, a manager of a bookstore in Greenwich Village. Powell quit his job, however, to write the Anarchist Cookbook. “My motivation at the time was simple,” said Powell in an article for The Guardian. “I was being actively pursued by the US military, who seemed single-mindedly determined to send me to fight, and possibly die, in Vietnam.” Its counter-cultural, violent message proved popular; today, it has sold in excess of 2 million copies.

It should come as no surprise that the book is infamous and controversial. But the kinds of criticism it attracts varies depending on the source. Governments across the world clearly have a negative opinion of the text. It does, after all, advocate for violent civil disobedience. The Anarchist Cookbook is banned in Australia. In the UK, possessing the book—though not illegal itself—has often been used as evidence in terrorism cases. A teenager was accused and later acquitted of a plot to assassinate British National Party members in 2008. In 2017, a 27-year-old who had traveled to Syria and possessed a copy was accused of being a terrorist. It turned out that he had merely printed a copy of the Anarchist Cookbook for use in a role-playing game in a university society.

In the United States, critics have called for a ban of Anarchist Cookbook ever since its publication. Worryingly, the book has been found in the possession of several mass shooters, including the Columbine shooters, a 2013 shooting at a Colorado high school, and the 2012 shooting at a movie theater in Aurora, Colorado. Despite these demands, the book remains legal and easy to purchase or find online.

Though it remains legal, the FBI certainly doesn’t approve of it. In their initial investigation of the Anarchist Cookbook, the FBI wrote that it “has to be one of the crudest, low-brow, paranoiac writing efforts ever attempted.” Numerous letter-writers exhorted then-FBI director J. Edgar Hoover to ban the book, but he could only reply that “the FBI has no control over material published through the mass media.” 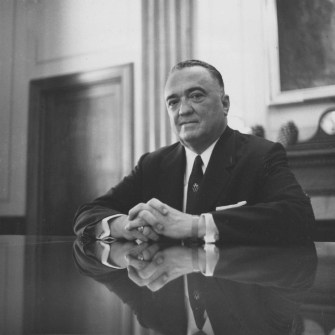 A photo of J. Edgar Hoover, under whose administration the FBI investigated the Anarchist Cookbook.

Still others argue that the book should be banned because much of its content is… well… crap. Powell wrote the Anarchist Cookbook when he was just 19, and much of its information is inaccurate. For example, the cookbook provides instructions for extracting a chemical called bananadine—”a mild, short-lasting psychedelic”—from banana peels. Bananadine does not exist; it was a fabrication written in the underground newspaper the Berkeley Barb in an attempt to get authorities to ban bananas. Powell, however, believed it to be true.

The explosive recipes are particularly dangerous, though few would feel much remorse if a bomb-maker were to accidentally blow themselves up. Still, since the text attracts many people who are more curious than homicidal, the inaccuracies could have consequences for more innocent readers.

Even anarchists don’t find the Anarchist Cookbook particularly compelling. For one, its philosophical stance is questionable. Its preface conflates nihilism and anarchism, a position that many anarchists would take umbrage to. Leo Tolstoy, for example, was certainly not a nihilist; he was a thoroughly religious man who espoused an anarcho-pacifist philosophy. Noam Chomsky believed in anarcho-syndicalism, a kind of mixture of socialism and anarchy that very much requires the belief in something, at the very least the virtue of doing work for work’s sake.

More inherent to the book’s purpose is the fact that the use of violence as a means to anarchy is perhaps the defining divide among different anarchist philosophies. Violent actions in anarchy is referred to as the propaganda of the deed—a kind of terrorist method of intimidating those in power and recruiting and inspiring others for a political revolution. Though this conforms to the public perception of an anarchist, it is very much denied by many prominent anarchist thinkers, like Leo Tolstoy—who was more or less constitutionally incapable of hurting a fly—Noam Chomsky, and Howard Zinn.

But the most important person to level criticism against the book and its violent tactics is William Powell himself. Powell later converted to Anglicanism and became a teacher to students in developing countries in Africa and Asia, a far cry from his anarchist youth. He has been trying to get the book pulled from shelves for decades, but he no longer holds the copyright to the work.

In his article for The Guardian, Powell wrote:

Over the years, I have come to understand that the basic premise behind the Cookbook is profoundly flawed. The anger that motivated the writing of the Cookbook blinded me to the illogical notion that violence can be used to prevent violence. I had fallen for the same irrational pattern of thought that led to US military involvement in both Vietnam and Iraq. The irony is not lost on me. […] The continued publication of the Cookbook serves no purpose other than a commercial one for the publisher. It should quickly and quietly go out of print.

Despite his efforts, the Anarchist Cookbook is still widely disseminated online and easily purchased at Amazon or bookstores. While the commitment to the free and unimpeded distribution of writing is a valuable, admirable quality in any democracy, in the face of so much criticism, perhaps it would be best if the Anarchist Cookbook did, in fact, go quickly and quietly out of print.

Far from acting as the conduits of a benevolent deity, these religious leaders threw the teachings of their own church out of the window.
The Present

Research shows that psilocybin leads people away from materialism and toward transcendentalism. Apparently, mushrooms teach metaphysics.
Up Next
The Past

It was a sprawling civilization.