As the cradle of humanity, the little bit we know about Africa’s pre-colonial past is not nearly enough. In South Africa, the lack of a written record means that its past remains shrouded in mystery. Recent laser imagery, however, in the southeast quadrant of Johannesburg, at Suikerbosrand National Park, has revealed something striking and massive: a city once home to, perhaps, 10,000 people that’s been lost for 200 years. 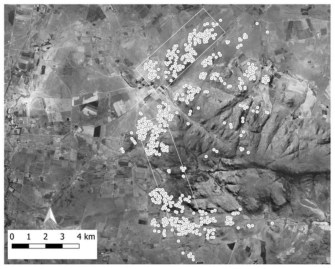 Professor Karim Sadr writes in a University of the Witwatersrand press release:

“Four or five decades ago, several ancient Tswana ruins in and around the Suikerbosrand hills, about 60 kilometers south of Johannesburg, had been excavated by archaeologists from the University of the Witwatersrand. But from ground level and on aerial photos the full extent of this settlement could not be appreciated because vegetation hides many of the ruins.”

With LiDAR scanning, though, a completely different picture emerged. Sadr commissioned its use because he suspected vegetation might be obscuring something significant.

LiDAR stands for “Light Detection and Ranging,” and it’s been in the headlines before for discovering hidden lost Mayan civilizations in South America. (It’s also the primary sensor in many autonomous-vehicle systems.) Sadr explains its function in archeology to africanews.com, calling it a scanning machine that bombards the landscape with laser lights.

“I mean billions and billions of pulses of laser lights, something like four or five hundred per square meter, just all time coming out, and as soon as each pulse hits an object — any solid object, a bird or a leaf or a tree or the ground — it reflects straight back to the machine and then the machine can figure it out where that interception took place in three dimensions,” he said. “So when the plane collects all of this data, masses of it, and it comes down to ground… they can project that data.” 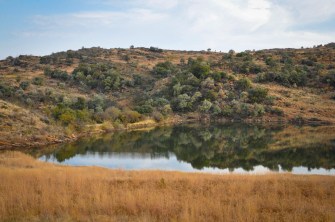 What’s been learned about SKBR

SKBR sat on the lower slopes of the Suikerbosrand hills and was occupied from the 15th century until the later half of the 1800s. Its residents spoke the Tswana language.

What’s been revealed qualifies the find as a city, not just scattered ruins — there are 750–800 homesteads covering an area about 10 kilometers long and 2 km wide. (Sadr notes that the ancient Mesopotamian city of Ur was considerably smaller for comparison.)

Cattle seem to have been important to the city’s residents, as there are stone-walled passageways that experts believe were acted as channels through which herds were led. There are also two enclosures together covering about 10,000 square feet that archeologists suspect were kraals, pens for nearly a thousand bovines. 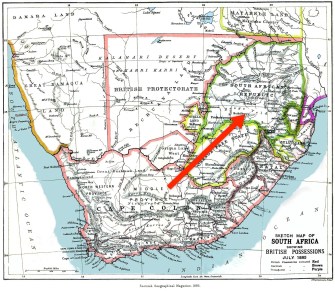 Map of area shortly after the fall of SKBR. Image source: Wikimedia Commons

At the entrances of some of the larger homesteads are piles of cattle-dung ash combined with livestock bones and broken pottery. “These are the remains of feasts, and the ash heaps’ size publicized the particular homestead’s generosity and wealth,” says Sadr. Similar displays of refuse indicating status have been found in other cultures around the world, such as those in Nigeria and India.

Accompanying the ash piles at some of the larger homes are short, squat stone towers whose purpose isn’t known — they may have been burial sites for prominent people or even the former foundations of grain bins, but they do seem to indicate higher community standing.

There’s no doubt more to learn about SKBR’s past life, but at least it’s finally clear, after hundreds of years, that it’s there, within easy reach of South African archaeologists and cutting-edge imaging technology.

Tags
africaancient cityancient worldarcheologydiscoveryhistorylidar
In this article
africaancient cityancient worldarcheologydiscoveryhistorylidar
Related
High Culture
Why are flood myths so common in stories from ancient cultures around the world?
Could the prevalence of flood myths around the world tell us something about early human migration or even the way our brains work?
The Past
The Wild West was lawless and chaotic — and the police helped keep it that way
Lawmen and outlaws were often the same people.
Thinking
6 great philosophers and how they used their political power
Most philosophers merely contemplate the world, but what about the ones who actually tried to change it?
The Past
Ancient migration: Bering Strait land bridge from Asia to North America was not a one-way road
Ancient humans crossed the Bering Strait land bridge from Asia into North America. But some of them went back.
High Culture
Did Paul Cézanne hide an early self-portrait underneath a 160-year-old still life?
To answer that question, we may have to figure out when the famed painter started to go bald.
Up Next
Neuropsych
Is Samuel or Samantha in more pain? Yale study exposes bias in American adults.
Boy, girl: the pain is the same.