The study featured adults watching a child of ambiguous gender get their finger pricked by a doctor. This study modeled itself on a previous study from 2014, but the difference here featured a larger sample size of 264 individuals, all of whom sat down in front of a computer to watch a video and answer questions.

Those who watched the video were then presented with questions, including, “Compared to the typical boy/girl, the child’s perception of pain/display of pain was…” — and they were asked to rate the pain accordingly, with the results they gathered displayed in the chart below. 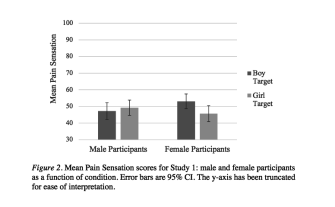 The authors of the paper write that they found that “the ‘boy’ was rated as experiencing more pain than the ‘girl’ despite identical clinical circumstances and identical pain behavior across conditions.” The males reported “a greater difference between the display of pain in boys and girls than did female participants.”

The child was a young girl. In a test that followed the first test featuring the video, it was found that “58.2 percent of participants correctly judged that the child was female, while 41.8 percent thought the child was male.”

The authors of the study say that this proved that the results of the former test stemmed from gendered stereotypes, and while there’s a degree to which these results seem undeniably true, they seem to elide working through the self-acknowledged fact that the questions may have had a slight role in priming those they tested to observe the child through a gendered stereotype.

The logic of this might seem academic, but it obscures the eventual overall accuracy of the interesting point the study makes: the study does not indicate whether or not those who correctly identified the gender of the child also adequately observed the purported pain of the child — it just runs two separate tests in the name of eliminating some mathematical ‘noise.’ In other words: you could still correctly guess that the child was a girl and still apply a gendered (or perhaps even agist) response to the child’s pain. The study doesn’t tell us that.

But finding ways in which one could clearly delineate certain observations would produce ‘better’ data and better results. And, to the credit of the authors, they do note that “Future studies should use multiple videos including a mix of both male and female children with tightly controlled gender cues between conditions,” but there is the slightest and smallest of gaps in the study itself here worth bearing in mind.

It’s also worth considering that the people who made these judgements of the child did so from a computer: they weren’t parents or medical professionals.

But what are the implications of this? What might be helpful for you, yourself as you go about confronting gender bias in the world at large?

“Male and female children,” the authors of the study write, “usually give similar self-report ratings for pain intensity, pain threshold, pain tolerance … with no statistically or clinically significant differences prior to puberty.”

And yet: women receive “less adequate pain medication compared to men, hav[e] a lower probability of admission to intensive care units, and a higher likelihood of being denied additional diagnostic procedures in response to complaints of pain.”

And so individuals were surveyed online who decided that the female child was a male child who was experiencing a greater amount of pain.

Which brings us to the second question that began this section: what might be helpful for you, yourself as you go about confronting gender bias in the world at large? How would you fare if you were confronted with an androgynous-seeming child and asked to assess their pain? Does it mean that you have to reassess your entire understanding of what it means to be a woman and in pain? That you have to grapple with the fact that institution after institution seems to have failed them, as this write-up in The Guardian from 2017 all but states plain?

There are two ways to answer this: the first is to understand that small wins will eventually build up and matter, as a study from Stanford notes in terms of tackling gender inequality at work; the second thing is to advocate not just for more studies like these that will slowly build up the necessary data but also for health legislation that actually prioritizes women’s health.

As it was put in “Sex-Specific Medical Research: Why Women’s Health Can’t Wait,” a report assembled by Brigham and Women’s Hospital, “Hold federal agencies accountable … Promote transparency and disclosure regarding the absence of sex-and-gender based evidence in research, drugs, and devices … Expand sex-based research requirements … Adopt clinical care practices and training curricula that incorporate a sex-and-gender-based lens in care and research.”

A study from Yale noting how our notions of gender warp our perception of someone else’s pain shouldn’t be an outlier; it should be part of a rich trove of data. It should be something close to the norm that a sufficient number of people are working on to fix.

10 best books for entrepreneurs and inventors