When most people hear the word “anarchy”, they think of chaos. It brings to mind images of gangs fighting in the streets, looting and rioting, without a police force to help end the madness. It can be hard to grasp why anybody would ever declare themselves to be an “anarchist.” After all, most of the news about anarchists in the United States focuses on their violent demonstrations.

But, you might be surprised to learn what happened when Anarchy reigned in Spain.

During the Spanish civil war, a brutal conflict between Franco’s Nationalists and the Republicans, eight million people in Catalonia engaged in their own revolution. Based on anarcho-syndicalism, organized by trade unionists, and briefly very successful, the revolutionaries offer us a possible image of what happens when anarchy reigns.

The fundamental concepts of anarchism are statelessness and opposition to hierarchy. To these ends, the Catalonian revolutionaries organized the region under cooperative and communal principals. Factories became worker cooperatives, farms became communes, and workers even managed their barber shops. This was done without the utilization of state control. Society became increasingly democratic, and everyone was increasingly equal in both principal and practice. 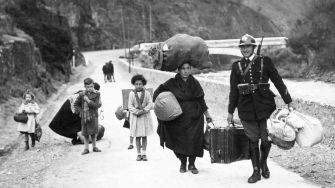 circa 1938: A member of the French frontier troops helps a family of refugees cross the border from Spain during the Spanish Civil War. (Photo by Keystone/Getty Images)

British author George Orwell, who fought for the Anarchists during the civil war, reflected later on how the anarchist society functioned in his book Homage to Catalonia:

“Practically every building of any size had been seized by the workers and was draped with red flags andwith the red and black flag of the Anarchists; every wall was scrawled with the hammer and sickle and with the initials of the revolutionary parties; almost every church had been gutted and its images burnt. Churches here and there were being systematically demolished by gangs of workmen. Every shop and cafe had an inscription saying that it had been collectivized; even the bootblacks had been collectivized and their boxes painted red and black. Waiters and shop-walkers looked you in the face and treated you as an equal. Servile and even ceremonial forms of speech had temporarily disappeared. Nobody said ‘Señor’ or ‘Don’ or even ‘Usted’; everyone called everyone else ‘Comrade’ or ‘Thou’, and said ‘Salud!’ instead of ‘Buenos días’. Tipping had been forbidden by law since the time of Primo de Rivera; almost my first experience was receiving a lecture from a hotel manager for trying to tip a lift-boy…… There was no unemployment, and the price of living was still extremely low; you saw very few conspicuously destitute people, and no beggars except the gypsies. Above all, there was a belief in the revolution and the future, a feeling of having suddenly emerged into an era of equality and freedom. Human beings were trying to behave as human beings and not as cogs in the capitalist machine.” 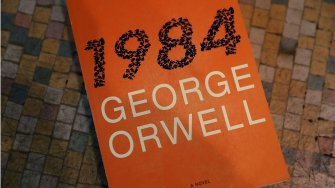 He would later have very well thought out ideas on totalitarian states. So well detailed that his name became the word to describe such states.

If it was so great, what happened? Why did it fail?

Support for the anarchist movement was undermined by Stalinist communists hoping to draw support for their war effort, which they argued was more important than a revolution. This, combined with other factors, meant that the experiment had largely ended by the time that Franco won the war.

So, it was all sunshine and rainbows? They did reach the dream of hippie communes thirty years early?

It has been pointed out by many sources that coercion was used in many cases to “encourage” the collectivization of rural areas and private property was probably taken by force in urban areas as well. The revolutionaries also never entirely took full power in the areas they controlled. In Barcelona, the city with the most significant anarchist presence, at least 25% of the economy was always outside of syndicalist influence. Rates were higher in other areas. As the revolution only lasted ten months, questions on how the society would have continued to develop remain unanswered.

Are there any examples since the 1930s of how anarchism might work?

Nothing on such a scale, though elements of anarchist thought, such as decentralized power and participatory democracy, were hallmarks of the Occupy Movement. Notable American philosopher Noam Chomsky is a self-declared anarchist who has written several books on the subject.

And, perhaps as is to be expected with left-wing movements, there is still a multitude of organizations promoting some form of anarchism/libertarian socialism. The trade unions that lead the social revolution in 1937 are still very active organizations in Spain.

Tags
activismcapitalismgovernmenthistoryjustice systempolitics
In this article
activismcapitalismgovernmenthistoryjustice systempolitics
Related
Strange Maps
The horrors of World War II air war, in one stark map
This graph shows how badly German cities were hit by Allied bombing raids.
High Culture
Why are flood myths so common in stories from ancient cultures around the world?
Could the prevalence of flood myths around the world tell us something about early human migration or even the way our brains work?
The Past
The Wild West was lawless and chaotic — and the police helped keep it that way
Lawmen and outlaws were often the same people.
Thinking
6 great philosophers and how they used their political power
Most philosophers merely contemplate the world, but what about the ones who actually tried to change it?
The Past
Ancient migration: Bering Strait land bridge from Asia to North America was not a one-way road
Ancient humans crossed the Bering Strait land bridge from Asia into North America. But some of them went back.
Up Next
The Present
Hologram technology finally advances to Blade Runner levels
Get ready for images projected in mid-air to start appearing in the next few years.