Scientists have reproduced the voice of an ancient Egyptian priest by creating a 3D-printed replica of his mummified vocal tract.

An international and interdisciplinary team, led by David Howard, a professor of electronic engineering at Royal Holloway, used computed tomography (CT) scanning technology to measure the dimensions of the vocal tract of Nesyamun, a mummy that’s spent about two centuries on display at Leeds City Museum in the United Kingdom.

The team then used those measurements to 3D-print an artificial vocal tract, through which they produced sounds using a peculiar electronic device called the Vocal Tract Organ. (You can check it out here.)

“The Vocal Tract Organ, a first in its own right, provided the inspiration for doing this,” Howard told CNET.

Nesyamun, whose priestly duties included chanting and singing the daily liturgy, can once again “speak” — at least, in the form of a vowel noise that sounds something like a cross between the English pronunciation of the vowels in “bed” and “bad.”

Of course, the new “voice” of Nesyamun is an approximation, and given the lack of actual recordings of his voice, and the degeneration of his body over millennia, it’s impossible to know just how accurate it is. But the researchers suggested that their “Voice from the Past” project offers a chance for people to “engage with the past in completely new and innovative ways.” 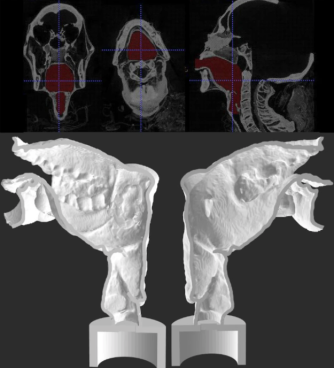 “While this approach has wide implications for heritage management/museum display, its relevance conforms exactly to the ancient Egyptians’ fundamental belief that ‘to speak the name of the dead is to make them live again’,” they wrote in a paper published in Nature Scientific Reports. “Given Nesyamun’s stated desire to have his voice heard in the afterlife in order to live forever, the fulfilment of his beliefs through the synthesis of his vocal function allows us to make direct contact with ancient Egypt by listening to a sound from a vocal tract that has not been heard for over 3000 years, preserved through mummification and now restored through this new technique.”

It’s not the first time scientists have “re-created” an ancient human’s voice. In 2016, for example, Italian researchers used software to reconstruct the voice of Ötzi, an iceman who was discovered in 1991 and is thought to have died more than 5,000 years ago. But the “Voices of the Past” project is different, the researchers note, because Nesyamun’s mummified corpse is especially well preserved.

“It was particularly suited, given its age and preservation [of its soft tissues], which is unusual,” Howard told Live Science.

As to whether Nesyamun’s reconstructed voice will ever be able to speak complete sentences, Howard told The Associated Press, that it’s “something that is being worked on, so it will be possible one day.”

John Schofield, an archaeologist at the University of York, said that reproducing voices from history can make museum experiences “more multidimensional.”

“There is nothing more personal than someone’s voice,” he told The Associated Press. “So we think that hearing a voice from so long ago will be an unforgettable experience, making heritage places like Karnak, Nesyamun’s temple, come alive.”

Tags
ancient worldegyptmuseumsspeech
In this article
ancient worldegyptmuseumsspeech
Related
13.8
A fable of ancient Greece: when the mythic universe became a rational machine
This short story is a fictional account of two very real people — Anaximander and Anaximenes, two ancient Greeks who tried to make sense of the universe.
Hard Science
Earth’s first puff of oxygen may be thanks to volcanoes
Scientists track down a puzzling early burst of oxygen on Earth.
Hard Science
Explaining a billion-year gap in the fossil record
A puzzling — and huge — break in the geological record finally might be explained.
Hard Science
Pharaoh’s groupies: why are we obsessed with ancient Egypt?
We should not romanticize ancient Egyptian culture.
The Past
The meaning of happiness, according to a baker in ancient Pompeii
Searching for happiness in the midst of personal or societal crises are nothing new.
Up Next
Life
Some shark species have evolved to walk
The relatively quick evolution of nine unusual shark species has scientists intrigued.