It is called the “Great Unconformity,” and it has puzzled geologists ever since it was first noticed in the walls of the Grand Canyon by famed geologist John Wesley Powell in 1869. In geology, time is marked by layers of rock deposited atop each other, little by little over time. The thing about the Great Unconformity is that about a billion years of rock appear to be missing between 3 billion-year-old sediment and relatively young, 550-million-year-old stuff sitting directly on top of it.

Intriguingly, that 550 million-year-date is just a few million years before the Cambrian explosion — the widespread appearance of complex life on Earth.

Although the Great Unconformity is easy to spot in the Grand Canyon, a similar disruption is apparent in lots of other places, and some geologists have hypothesized that whatever caused them was some kind of global event.

Now a new study suggests that, first, there may not have been just one unconformity but rather a series of them roughly coincident around the world. Second, they all may have had to do with an ancient supercontinent named Rodinia that formed about a billion years ago.

Atomic clock in the rock 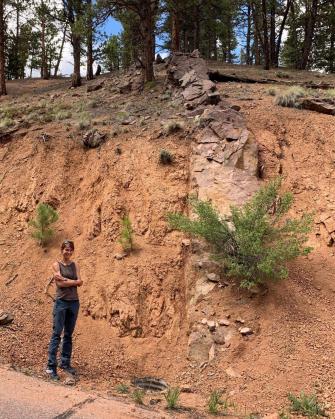 The new research is based on a dating technique called thermochronology. With thermochronology, a close examination of atoms inside rock samples allows geologists to construct a history of the stone based on how hot or cold it was at different times.

Erosion is a powerful force. Consider the Grand Canyon. As study co-author Rebecca Flowers tellsCU Boulder Today, “Earth is an active place. There used to be a lot more rocks sitting on top of Mount Everest, for example. But they’ve been eroded away and transported elsewhere by streams.”

It is believed that supercontinent Rodinia — which pre-dated the better-known Pangaea — formed through a process, called extrovert assembly, in which pieces of a prior supercontinent that has broken apart meet again after having traveled all the way around the planet. During their extended journey, the edges of the pieces experience significant erosion before smashing back together.

“At the edges of Rodinia,” says Flowers, “where you have continents colliding, you’d see these mountain belts like the Himalayas begin to form. That could have caused large amounts of erosion.” In addition, the researchers speculate that the birth and death of Rodinia may have wreaked havoc all over the world as its pieces first came together and then eventually broke apart.

Flowers concludes, “We’re left with a feature that looks similar across the world when, in fact, there may have been multiple great unconformities, plural. We may need to change our language if we want to think about the Great Unconformity as being more complicated, forming at different times in different locations and for different reasons.”

Other research teams, such as the one at University of California-Santa Barbara, have been coming to similar conclusions. “It’s a messy process,” says the school’s Francis Macdonald. “There are differences, and now we have the ability to perhaps resolve those differences and pull that record out.”

Considering the Great Unconformity’s temporal proximity to the Cambrian explosion, a final solution to the puzzle may have implications beyond geology. “The Cambrian explosion,” says Macdonald, “was Darwin’s dilemma. This is a 200-year old question. If we can solve that, we would definitely be rock stars.”

Tags
ancient worldarchaeologygeologyplanetrock layerssupercontinent
In this article
ancient worldarchaeologygeologyplanetrock layerssupercontinent
Related
Strange Maps
Dutch government releases a genuine treasure map from WWII, sparking a hunt for the loot
X marks the spot. The Dutch town of Ommeren has been swamped by detectorists armed with shovels looking for $20-million treasure.
The Past
Ceramics, corn cobs, and other strange things we used before toilet paper
Some objects were softer than others.
Strange Maps
The great European house cat migration
Ancient bones reveal that domesticated felines were at home in Pre-Neolithic Poland around 8,000 years ago.
The Past
Here is the most terrifying pterosaur ever discovered
Meet your new flying nightmare: Thapunngaka shawi.
High Culture
Machu Picchu has changed Peru — for better and for worse
If tourism is the lifeblood of the Peruvian economy, then Machu Picchu is the heart pumping that blood — in sickness and in health.
Up Next
Thinking
Gray zone: when is it best not to save a life?
Medical science can save lives, but should it do so at the cost of quality of life?