Oxygen arrived in large quantities and for good on Earth about 2.4 billion years ago in what is called the Great Oxidation Event. It is believed that this was the result of an explosion in living organisms capable of photosynthesizing carbon dioxide and water into sugar, with oxygen released as a side product. However, in 2007, researchers discovered evidence of a brief earlier period of oxygen, in shale from Mount McRae in Western Australia. This puff occurred 50 to 100 million years before oxygen’s permanent arrival.

It has been theorized that these whiffs were the result of a temporary reduction in physical and chemical processes. But Roger Buick, co-author of a new study, says this is wrong:

“Our study suggests that for these transient whiffs of oxygen, the immediate trigger was an increase in oxygen production, rather than a decrease in oxygen consumption by rocks or other nonliving processes. It’s important because the presence of oxygen in the atmosphere is fundamental — it’s the biggest driver for the evolution of large, complex life.”

So what produced the oxygen? The researchers say it was life itself, in the form of microbes feasting on phosphorus draining into waterways from volcanic ash and lava fields. “There are other nutrients that modulate biological activity on short timescales, but phosphorus is the one that is most important on long timescales,” says study lead author Jana Meixnerová.

There is lots of phosphorus now — indeed, it is found in fertilizer — but in the Precambrian era, its only source would have been volcanic. According to the authors, therefore, when the period’s volcanoes erupted, they provided early life the phosphorus kick that it needed. It is a dramatic case of the geological directly influencing the biological.

Telltale mercury in the rock 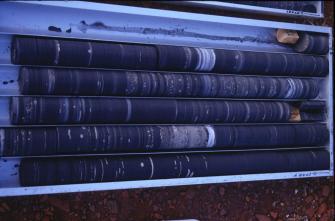 The authors of the study returned to the Mount McRae shale in search of mercury isotopes. When volcanoes erupt, they spew mercury high into the atmosphere, after which it eventually settles to the ground over the course of a year or two. “Sure enough,” says Buick, “in the rock below the transient spike in oxygen we found evidence of mercury, both in its abundance and isotopes, that would most reasonably be explained by volcanic eruptions into the atmosphere.”

“During weathering under the Archaean [the early-to-middle period of the Precambrian era] atmosphere, the fresh basaltic rock would have slowly dissolved, releasing the essential macronutrient phosphorus into the rivers,” says Meixnerová. “That would have fed microbes that were living in the shallow coastal zones and triggered increased biological productivity that would have created, as a byproduct, an oxygen spike.”

The researchers have no way to know exactly where the implicated volcanoes erupted, but they note that there are ancient large lava fields of the appropriate geological age in India, Canada, and elsewhere.

It is not just about Earth, either. The research may provide clues that could help in the identification of exoplanets that support life in a form we can recognize. If a geologic process such as volcanism can lend a hand to life struggling to gain a foothold here, it may also be the case elsewhere. Tellingly, the study was funded by NASA.

Tags
ancient worldbiospherechemistrygeologynasavolcano
In this article
ancient worldbiospherechemistrygeologynasavolcano
Related
The Past
How the death of alchemy gave birth to modern science
Far from practicing witchcraft, the experimentation of medieval alchemists helped bring about the Scientific Revolution.
The Past
Here is the most terrifying pterosaur ever discovered
Meet your new flying nightmare: Thapunngaka shawi.
The Present
Top 10 most popular stories on Big Think in 2022
These were the stories you clicked on the most.
Hard Science
What dead whales can teach us about finding aliens on Mars
Dead whales inspire a way to find extraterrestrial life on Mars.
The Future
Gallium: The liquid metal that could transform soft electronics
Bend it. Stretch it. Use it to conduct electricity.
Up Next
13.8
What is light? The limits and limitlessness of imagination
Philosophers and scientists spent millennia arguing about the nature of light. It turned out to be stranger than anyone imagined.