Since the 1920s, researchers in Poland were under the impression that an ancient Egyptian mummy they were housing was a male priest named Hor-Djehuty. But a recent radiological analysis revealed an anomaly near the pelvis of the entombed: a tiny foot.

The discovery, reported by researchers with the Warsaw Mummy Project, marks the first-known case of a pregnant mummy. The woman was likely buried around 100 BC in the royal tombs of Thebes, Upper Egypt, according to a study published in the Journal of Archaeological Sciences.

“She came from the elite of Theban community and was carefully mummified, wrapped in fabrics, and equipped with a rich set of amulets,” the study states. “Closer examination has revealed that the woman died between 20 and 30 years of age together with the fetus in age between the 26th and 30th week of the pregnancy.”

The Warsaw Mummy Project has named the entombed “the mysterious lady of the National Museum in Warsaw,” where she is housed. 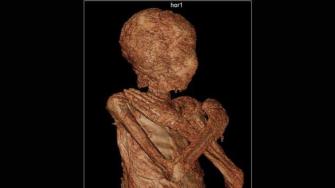 It’s not the first time this mummy has puzzled researchers. When it was donated to the University of Warsaw in 1826, the staff thought it was female, possibly because of the elaborate decorations on its sarcophagus. But after translating an Egyptian text on the sarcophagus, it seemed the mummy was Hor-Djehuty:

“Scribe, priest of Horus-Thoth worshiped as a visiting deity in the Mount of Djeme, royal governor of the town of Petmiten, Hor-Djehuty, justified by voice, son of Padiamonemipet and lady of a house Tanetmin,” the translation read.

But computer tomography conducted in 2016 suggested the mummy might be female, revealing a delicate bone structure, long hair, and mummified breasts.

How did a pregnant mummy end up in the sarcophagus meant for a male priest? The researchers weren’t quite sure. It could have been a mistake. Or it’s possible that grave robbers or antiquities dealers swapped the mummies to increase its resale value, a common practice in the 18th and 19th centuries.

In any case, the main mystery centers on the fetus.

“This whole discovery brought our attention to the question of why it was not removed,” Wojtek Ejsmond, a co-founder of the Warsaw Mummy Project, told CNN. “We don’t know why it was left there. Maybe there was a religious reason. Maybe they thought the unborn child didn’t have a soul or that it would be safer in the next world. Or maybe it was because it was very difficult to remove a child at that stage from the womb without causing serious damage.”

That the fetus wasn’t extracted is especially curious considering that several of the woman’s organs seem to have been removed, embalmed, and reinserted into the body, per the common mummification practices of Ancient Egypt. Could it be that the Egyptians believed the unborn baby had a soul? 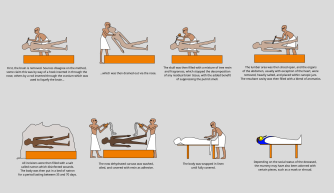 Simplistic representation of the Ancient Egyptian mummification process.SimplisticReps via Wikipedia

It’s unclear. The Egyptians had strong and complex beliefs about the afterlife. While these beliefs changed over the millennia, Egyptians generally believed that the physical body — called khet — needed to be preserved in order for the spirit (and its various parts) to journey into the underworld and, perhaps, beyond.

Given this belief system, it’s understandable why the Egyptians developed such elaborate funeral and mummification rites, which often took 70 days. Of course, this process was time-consuming and expensive, usually reserved for those of royal or noble background. Common people were typically buried in the desert, wrapped in cloth and surrounded by a handful of everyday objects. 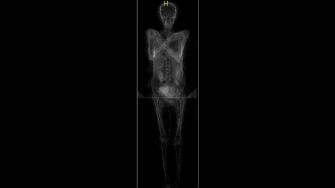 The researchers at the Warsaw Mummy Project hope their discovery will shed light on how the Egyptians conceptualized the souls of unborn children and that further interdisciplinary research can establish a cause of death for the mysterious lady of the National Museum in Warsaw.

All roads may not lead to Rome, but many of them lead to wealth and prosperity — even 1,500 years after the fall of the Roman Empire.
Thinking

Humans Can’t Fly A Helicopter On Mars, And That’s Why Ingenuity Is So Amazing

We give it the flight plan, and it takes care of the rest. It has to. Here’s why.No matter how advanced our technology becomes, there are certain limits that can never […]