There are three things that everybody knows about ancient Egypt: they had mummies, built the pyramids as tombs for kings, and really liked cats. While there is vastly more to ancient Egyptian culture than these details, they are accurate ones. All three of these conceptions were confirmed again this week when archaeologists in Egypt discovered a tomb full of mummified cats. 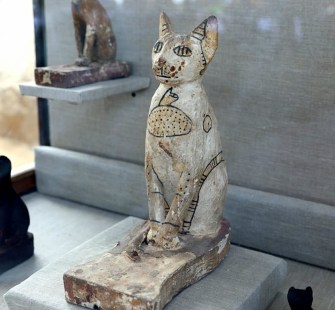 One of the items found at the dig site. It seems to be a very good kitty and not at all cursed.

The Egyptian Ministry of Antiquities has announced the discovery of dozens of mummified cats in a 4,500-year-old tomb. Alongside the cats were gilded statues of felines and a bronze icon of the cat-headed goddess Bastet. The archaeologists also found a large sarcophagus filled with mummified scarab beetles.

Other tombs on the site were dedicated to the royal official Khufu-Imhat. A door engraved with the names of two women was also found, though the archaeologists are still working on who they were. 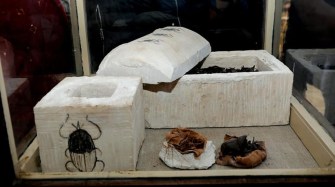 The beetles and the tiny caskets they were found in. Scarab beetles, including the well known dung beetle, were also considered sacred by the Ancient Egyptians.

Yes, since the 1890s, mummified cats have been found all over Egypt. According to Dr. Antonietta Catanzariti, who works with Smithsonian at UC Berkeley,a single massive discovery unearthed 180,000 well-preserved felines. Mummified cats are so common that during the 1880s they were sold off to make fertilizer as museums had little interest in buying more of them.

The Facebook post the ministry made about this discovery spends more time on the beetles than the cats, as the discovery of two, large, well-preserved beetles is a rare find.

Forget the beetles. Why would the Egyptians mummify cats?

The Egyptians mummified millions of animals, from beetles to bulls. According to Richard Evershed of the University of Bristol, this was partly because many animals were seen as the incarnations of gods and giving them the honor of mummification was a pious act. This is why many mummified animals were given the same quality of treatment as humans.

Others mummified their animals because they wanted to be buried with their pets. It’s no different than how some people today spend way too much money on their dogs, get their cats hip replacements, or include them in their will. Humans seem to love their pets no matter where you go and in what era. 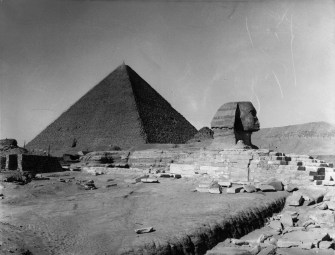 December 1936: The Great Sphinx of Giza, representing a guardian deity in Egyptian mythology, with the body of a lion and the head of a woman.

How else did the Egyptians show their love of cats?

The Egyptian love of cats goes back a long way. Mafdet, the protector against venomous creatures, was depicted as having the head of a cat as far back as 2,800 BCE. This depiction was likely a reference to the tendency for felines to kill snakes, as she was also often depicted as with the head of a Mongoose.

Breeds similar to the African wildcat are depicted as being domesticated as early as the 26th century BCE. After the 10th century BCE, the typical person started keeping domestic cats at home. The love endured to the 1st century BCE when a mob supposedly lynched a Roman for killing a cat. It was only when the Roman empire began to suppress paganism that the view of cats as sacred began to decline.

Cats, other than being wonderful pets, also ate rodents that would spread disease and steal grain. In an era before modern medicine or food storage techniques, both of these functions were indispensable. Just as many scholars view the veneration of cows in Hinduism as a result of the dependence of early peoples on cattle as a source of fuel, many Egyptologists suggest cats were so useful to the Egyptian people that they were treated as sacred as a result.

It’s wrong to think that they worshiped their cats, however. According Antonietta Catanzariti’s interview with Smithsonian, the ancient Egyptians’ attitude was one of reverence to the idea of the divine in animals. She explains that:

“What they were [actually] doing was associating cats to specific deities because of their attitude, how they were behaving in the natural world. Everything had a meaning. A cat protecting the house from mice. Or it might just protect kittens. These were attitudes that were attributed to a specific goddess.”

It isn’t that the cats were divine, but instead that they reflected the divine and should be respected as such; an observation many cat lovers would agree with.

For the first time in nearly 1500 years, fewer than half the people in England and Wales consider themselves Christian.
The Future

Synthetic milk is not a sci-fi fantasy; it already exists.
High Culture

The spikes in their mouths would have helped them catch squid or fish.
Up Next
Neuropsych

Too much sleep results in cognitive decline, researchers find

We know the dangers of too little sleep. Now for the other side of the story.