Beyond being great villains in horror films, mummies are excellent tools to learn about the past with. With these well-preserved corpses, you can learn about what people were like in life by reviewing what they left behind. If you get enough of them, you can start to make generalizations about how entire populations lived.

The Egyptians liked to bury mummies with possessions that they might take with them into the afterlife. Because of this, their tombs often reveal the lives they lived, the art styles of the time, what objects they found important enough to take with them into the beyond, and other details that might otherwise be lost to history.

One of the difficulties of using mummies to learn about these things is that they can be challenging to wrap back up after pulling back the bandages. Luckily for us, modern technology has made doing that obsolete. Recently, a team of researchers created CT scan images of three mummies and published their findings. 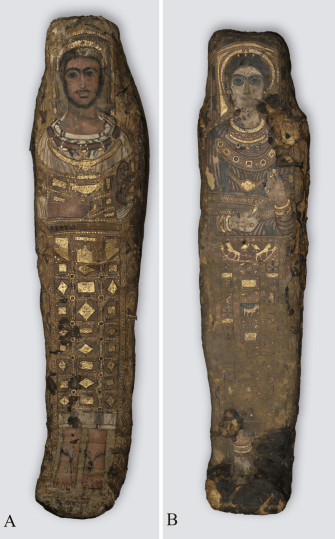 The decorated images showing who the mummies used to be. Credit: Zesch et al., PLOS One, 2020

The three mummies scanned are the only known examples of “stucco-shrouded portrait mummies.” As opposed to being buried in a coffin, these three were placed on wooden boards then wrapped in a textile and a shroud. They were then decorated with plaster, gold, and a whole-body portrait revealing what they looked like, how they styled their hair, and what they wore in life. All three were once buried in Saqqara, the great Necropolis just south of Giza.

They date back to the Late Roman Period in Egypt, and all three of them have had very exciting afterlives filled with stories about their discoveries and shifting ownership. Now, thanks to modern technology, we can learn about their lives.

The CT scan shows that the man was between 25 and 30 years of age when he died and that he had several cavities and unerupted teeth. He was only 164 cm tall (around 5’4″). Several of his bones are broken, though this is believed to be the result of careless handling by whoever discovered the remains.

Most curiously, there is no evidence that his brain was removed during the mummification process, as was standard in other cases. It also seems that few embalming chemicals were used to preserve him. This suggests that he was just wrapped, painted, and buried and that dehydration is what kept his corpse so well preserved.

The woman was between 30 and 40 years old and stood at 151 cm (4’9″). She shows signs of arthritis in her knees. Like many other Egyptians, she was buried in fine jewelry. Several necklaces appeared on the scan, suggesting she was well off. For reasons unknown, nails were also found in her abdomen. Like her male counterpart, her brain was not removed during mummification, either.

The last mummy was that of a girl in her late teens. She showed signs of having a benign tumor on her back, and all of her internal organs were still intact. Her coffin contains hairpins, suggesting that she wore her hair up as depicted in her portrait.

Finding hairpins with the remains is noteworthy, as only a few other such examples exist. It provides further evidence that ancient Egyptians wore their hair up.

Other mummies have been buried with coins, but in Egypt, the practice does not seem to go back to before Alexander the Great conquered the area. This suggests that the deceased had adopted elements of the Greeks’ religion and brought along coins to pay Charon.

The find also sheds more light on how the Egyptians lived and died under Greek and later Roman rule and how their conquerors’ beliefs and art styles influenced their religion.

Three out of four Russians accused of witchcraft were men.
The Past

You can love a romantic partner, but also a pet, a book, God, or the sound of someone’s voice. We need many more words for love.
Up Next
The Present

When Christmas was cancelled: a lesson from history

Christmas was banned in 1647 and rebellions broke out across the country.