We’ve been hearing about the dangers of too little sleep for years. With 70 million Americans suffering from sleeping disorders, risks of depression, obesity, anxiety, and psychological disorders increase when we get less than seven hours a night. Even memory problems form when we don’t dream enough, which relies on achieving enough cycles of REM sleep—also dealing with duration.

There’s always two sides to every story. You can die of thirst or drink too much water. Same goes for sleep. The world’s largest sleep study has just wrapped up, offering balance to how we usually treat sleep: Too much is no good either.

Published in the journal Sleep (where else?), the researchers gathered data from over 10,000 people from across the planet. Western University Brain and Mind Institute researchers launched this study in June 2017; over 40,000 volunteers initially signed up. They filled out questionnaires and performed a series of tests to monitor their cognitive abilities. As Western researcher Adrian Owen (located in London, Ontario) says:

People who logged in gave us a lot of information about themselves. We had a fairly extensive questionnaire and they told us things like which medications they were on, how old they were, where they were in the world and what kind of education they’d received because these are all factors that might have contributed to some of the results. 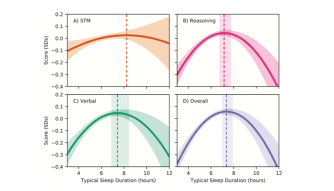 Visualizations: Predicted score performance as a function of sleep duration, for (A) STM, (B) Reasoning, (C) Verbal, and (D) Overall scores, in units of standard deviations. Although STM did not show a significant relationship with typical sleep duration, it is included for comparison. Shaded regions on top and bottom of the curve indicate 95% confidence intervals of the prediction. Vertical dashed lines indicate the location of the curves’ maxima, with shaded 95% confidence intervals prediction (except for STM, where they could not be calculated due to a nonsignificant quadratic term).

The study cites a survey of over a quarter-million people, in which 29.2 percent of respondents claimed to sleep less than six hours per night; even partial sleeping disorders cost the Canadian economy $21.4 billion each year. Since basic cognitive functioning requires collaboration from numerous systems, reasoning and verbal skills suffer when you sleep too little—or too much, they note. Sure, less than seven hours per night is problematic, but so is more than eight hours, they found.

The Cambridge Brain Sciences 12-point online test covers a wide application of cognitive abilities, including spatial working memory, reasoning, planning, cognitive flexibility, and visuospatial working memory. A total of 10,886 participants, including 6,796 women and 4,013 men (average age of 41.7 years), were assessed. The optimal amount of sleep for reasoning, verbal, and overall abilities, turned out to be 7.16 hours.

Interestingly, despite a popular myth, age does not have an impact on required sleep. We don’t actually need less sleep as we grow older; in fact, the authors write, sleeping less as you age could aid in diseases of dementia and age-related cognitive decline. As researcher associate and lead author Conor Wild says, it’s all about how long you spend unconscious.

We found that the optimum amount of sleep to keep your brain performing its best is 7 to 8 hours every night and that corresponds to what the doctors will tell you need to keep your body in tip-top shape, as well. We also found that people that slept more than that amount were equally impaired as those who slept too little.

One bright spot for those who like to sleep in: A single night of “oversleeping” results in better-than-usual performance on these tests. And the bad news for those suffering from lack of sleep continues: Sleeping less than four hours per night is the equivalent of aging almost eight years.

These results matter, not just for one’s general health, but for the functioning of society. As the authors conclude:

These findings have significant real-world implications, because many people, including those in positions of responsibility, operate on very little sleep and hence may suffer from impaired reasoning, problem-solving, and communications skills on a daily basis.

Tags
cognitive sciencedepressionhealthobesitypsychologysleep
In this article
cognitive sciencedepressionhealthobesitypsychologysleep
Related
Sponsored
What childhood “money story” is shaping your financial behaviors?
Here are the signs that you inherited “money anxiety” from your parents.
Neuropsych
The most common source of awe might surprise you
It’s us.
How to fix your money trauma
Do you remember feeling “money shame” for the first time?
▸
7 min
—
with
Dr. Brad Klontz
Neuropsych
Psychology studies that go viral are likelier to be bogus
A new 20-year analysis of over 14,000 psychology studies finds that a study’s media coverage is negatively linked to its replicability.
The Learning Curve
Why do high IQ people stagnate in their careers? Emotional intelligence
Research suggests that emotional intelligence is more vital for success than IQ.
Up Next
Strange Maps
A.I. turns 57 million crop fields into stunning abstract art
Detailed (and beautiful) information on 57 million crop fields across the U.S. and Europe are now available online.