A few years ago, researchers announced the development of the blackest black ever, a place where colors go to die. It was called Vantablack®, and it was so absorptive of visible light that only the tiniest amount escaped its surface to reflect back to our eyes. (All of that light energy is dissipated into the surrounding substrate, so Vantablack doesn’t become hot.)

In a new paper published in the journal ACS Applied Materials & Interfaces, scientists at Purdue University announced BaSO4 (barium sulfate), the whitest white ever. BaSO4 is practically impervious to the colors of the visible spectrum. Even better, while it’s a very cool invention in the colloquial sense, it’s also cool in the thermal sense. 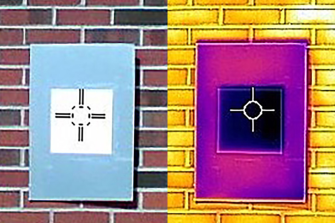 The infrared image on the right shows how a square of the super-white paint and the board on which it’s painted — shown in a normal image on the left — are cooler than the surrounding materials.Credit: Purdue University/Joseph Peoples

Most outside paints actually warm the surfaces to which they’re applied. While there are already some reflective paints on the market, they only reflect 80 to 90 percent of sunlight, not enough for a cooling effect.

By contrast, BaSO4 results in 98.1 percent of sunlight bouncing off. According to senior investigator Xuilin Ruan, “If you were to use this paint to cover a roof area of about 1,000 square feet, we estimate that you could get a cooling power of 10 kilowatts. That’s more powerful than the central air conditioners used by most houses.”

Ruan and his colleagues tested BaSO4 using thermocouples, high-accuracy devices that measure voltage to determine temperature. They found that at night, BaSO4 surfaces are 19° F. cooler than surrounding air. Under strong sunlight the effect is not quite so extreme, but still dramatic: 8° of cooling.

The researchers even found the paint works in cold weather. Testing it on a 43° F. day, the surface on which BaSO4 was painted was a brisk 25° F. Their tests also indicate that BaSO4 is hardy enough for outdoor conditions.

How the new white was developed 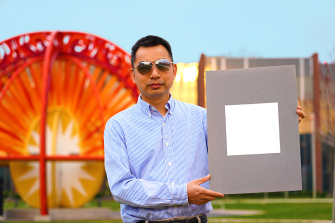 Research in the field of radiative paint for cooling goes back to the 1970s, though Ruan’s team has been working toward BaSO4 for only six years. Along the way, they analyzed over 100 reflective materials, trying them out in about 50 experimental formulations.

Another factor that makes the team’s BaSO4 formulation so reflective is that the researchers used barium sulfate particles of many different sizes. When it comes to reflecting light, size matters.

Co-author and PhD student Joseph Peoples said, “A high concentration of particles that are also different sizes gives the paint the broadest spectral scattering, which contributes to the highest reflectance.”

The team’s formulation method, they report, is compatible with commercial paint production.

Cool support for the planet

Purdue has applied for patents relating to BaSO4, though there are as yet no plans to make it commercially available.

However, the sooner they release it, the better. Air conditioning currently accounts for 12% of U.S. energy consumption. Also, many air conditioners use hydrofluorocarbons (HFCs). While HFCs constitute just a small percentage of greenhouse gases, they trap thousands of times the amount of heat as carbon dioxide.

Therefore, BaSO4 can play a role in combating global warming by reducing energy consumption and the emission of HFCs.

A “bio-battery” made from genetically engineered bacteria could store excess renewable energy and release it as needed.
Hard Science

It has no moving parts and could allow us to tap into renewable energy year round.
Up Next
Starts With A Bang

The Muon g-2 electromagnet at Fermilab, ready to receive a beam of muon particles. This experiment began in 2017 and will take data for a total of 3 years, reducing […]