If you met someone from a few hundred years ago and started rattling off the names of colors you saw around you, odds are he or she would be baffled. Some of these would be colors the other person had never heard of. It’s not that the hues have appeared only recently — it’s just that they hadn’t been named, and thus lacked an identity. A study has just been published in Proceedings of the National Academy of Science that offers fresh insights into how cultures around the world perceive and name colors. It turns out there are patterns that may universally apply, and it turns out we have a lot more colors now than we ever had before thanks to industrialization. 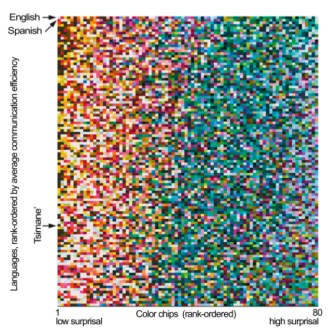 “Surprisal” is a mathematical value for non-familiarity. (GIBSON, ET AL)

The authors of the study began with an analysis of data from the World Color Survey (WCS), a large-scale survey of the way 110 different languages describe colors. They then followed up with experiments based on what they felt were patterns the WCS data predicted, focusing on three groups representing the development spectrum: English speakers, Bolivian-Spanish speakers, and members of the Amazonian Tsimané hunter/gatherer tribe. The experiments utilized 80 color chips across the spectrum of the Munsell color set. 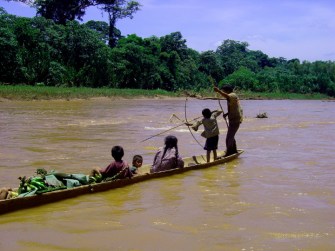 The researchers found that though the number of colors in each language varies — and the colors they name are inconsistent — their experiments supported a “color usefulness” theory, stated as: “Differences in color categorization between languages are caused by differences in overall usefulness of color to a culture.” Thus, color names that help a population describe something it actively uses are themselves more useful. Hues of naturally occurring things, such as the sky, are less likely to require a color descriptor since these things are just there.

Ancient Greeks, Chinese, Japanese, and Hebrews had no word for blue — and a therefore limited awareness of a primary color that just doesn’t occur much in nature: the sky, a few flowers, water at some angles, and that’s about it. 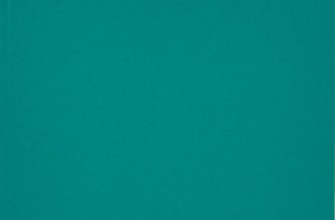 Green has a similar history, though the variant above, Marrs Green, has been named by The Telegraph as our current favorite color. It’s really nearly teal, a color many of us never heard of until until not too long ago, though its first recorded use was back in 1917. Teal inhabits an area somewhere between green and blue — Crayola even called it “teal blue” as crayon color #113 between 1990 and 2003.

And in spite of cultural difference, researchers found that the colors nonetheless fall into two basic categories: “warm” hues — red, pink, orange yellow, and brown — and “cool” ones like blue and green. There are likely to be more warm colors in a language than cool ones, and experts have wondered if it may be that they simply stand out more, a phenomenon called “perceptual salience.” But this new study suggests the imbalance may really reflect color usefulness, finding “Objects (what we talk about) are typically warm-colored, and backgrounds are cool-colored.” 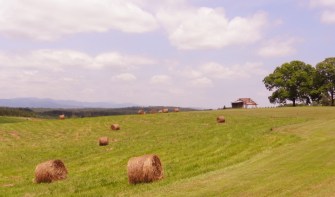 One of the most interesting takeaways from the new analysis is that the increasing presence of technology in a culture appears to result in more named colors, suggesting, “exposure to artificially colored objects promotes the usefulness of color for object identification, which is hypothesized to promote greater precision in color language.” The Tsimané language exhibits “relatively low communicative efficiency,” meaning that its speakers are less likely to use color as a descriptor. This has been attributed to an extensive vocabulary of natural and botanical objects that leaves them little reason to describe something by its color. And yet, when asked to describe an artificial object, color become a regular go-to descriptor for Tsimané subjects, lending credence to “the idea that the pre-dominance of artificially colored objects in Western cultures promotes the usefulness of color and, consequently, increases color-naming efficiency.” And the number of colors as well.

Related
The mind-bending physics of time
How the Big Bang gave us time, explained by theoretical physicist.
▸
8 min
—
with
Sean Carroll
The Learning Curve
The art of asking the right questions
The right questions are those sparked from the joy of discovery.
Starts With A Bang
Ask Ethan: Do my atoms really “touch” each other?
When you bring two fingers together, you can feel them “touch” each other. But are your atoms really touching, and if so, how?
13.8
Why the origin of life and the Universe itself might be forever unknowable
There might be a hard limit to our knowledge of the Universe.
Hard Science
200 years of exploring Antarctica
What we’ve learning from the world’s coldest, most forbidding, and most peaceful continent.
Up Next
Hard Science
Earth’s Hidden Continent Zealandia Finally Recognized
After decades of research and analysis of geoscience data, the seventh largest geological continent officially exists.