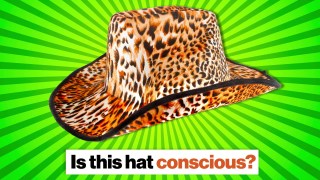 Consciousness, panpsychism, and AGI: What is it like to be a hat?

What if consciousness isn't all about the brain?
▸
6 min
—
with
Ben Goertzel

BEN GOERTZEL: Consciousness is one of these great vexing and confusing words and concepts, which intelligent people take different positions on and could argue about forever. My own perspective on consciousness is rooted in what you could call a sort of panpsychism, by which I mean the idea that consciousness is in essence a property eminent in existence, as much as space and time are. I mean everything that we see around us somehow is situated in time and in space, in our space-time continuum; panpsychism is the idea that everything around us and within us has some element of consciousness to it also, so that it's not really meaningful to think of: 'Here's this non-conscious matter and then there's this thing called consciousness, which is attached to some matter and not to others.' Now panpsychism to me is not even that interesting, it's almost obvious — it's just the foundation, the beginning for thinking about consciousness because then you have interesting questions like why is the consciousness associated with my brain so much more self-reflective and dynamic and in some senses intense than, say, the consciousness associated with my hat? I mean, it's a cool hat, it may be more conscious than the average hat, but in the end the brain has these complex feedback loops, the brain can model itself, the brain responds very differently to slightly different stimuli coming in and many properties of the brain seem associated with the more powerful and dynamic states of consciousness that it has relative to other things. So, if you accept panpsychism, that everything is imbued somehow with an element of consciousness, some things can still be more conscious than others and some things are differently conscious than others. And then that's where things get interesting.

When you talk about AI — so I would imagine if I were able to tap a wire into my brain or wi-fi connection into my brain and wire my brain into your brain, then as I increase the bandwidth of that wire between my brain and your brain, I would feel your mind there on the fringe of my mind, like almost as if we were fusing into one shared mind or something. That would be a bit freakish, it could be a lot of fun. But on the other hand, if I took my mind and wired it into my hat, I might feel what it is to be a hat, but I would imagine that whatever consciousness I feel on the other end of the wire, it's not going to be quite the same as a melding my mind with the mind of another human; it's going to be melding my mind with something that doesn't change very much or have much variety to its state. On the other hand, what if we think of Sophia version 10.0 with her mind enhanced by the SingularityNET blockchain-based AGI mind cloud — what if I wire my brain into that? Does it feel like wiring my brain into a human brain? Does it feel like wiring my brain into a hat or a brick or an earthworm? These would be very interesting experiments to do and they're even scientific in the sense that they could be audited by the community. If I wired my brain into my hat and then I said, 'Well I don't feel too much of the hat's consciousness there, just a little', you could wire your brain into that wire and then view what is the fused state of myself and the hat. Or if I wired my brain into super Sophia and I said 'Wow that's a really intense state of consciousness, now I feel what it's like to be a robot' and it's amazing you've got sensors all over the globe, it's like a DMT trip to the 10th power. You could wire your brain into that wire and like look in on that subjectively and think 'Whoa yeah, I can feel on the fringes of my consciousness like there's Ben some Sophia SingularityNET super mind, which are fusing together in an intensely conscious way.'

So this is what I think of as second-person science because it's a little different than just first-person experience that others can't audit, except indirectly through words or pictures or something. It's also different than typical third-person science where you're concerned with spreadsheets of numbers that are read out from the dials of experiments and so forth. It's sort of scientific community-based auditing of shared experience among different entities. And I think this is going to unfold in the next decades as brain-computer interfacing and brain-brain interfacing technology mature beyond their current significant but still early stage. And this is probably how we're going to really crack the nut of consciousness and see in what sense does panpsychism make sense and what sense are humans differently conscious than different types of computer systems and so forth.

For the good of all