Vanessa Hill is a video host and speaker who has won acclaim as the creator and host of the popular PBS web series, BrainCraft, which educates viewers on psychology, neuroscience[…]
Go to Profile 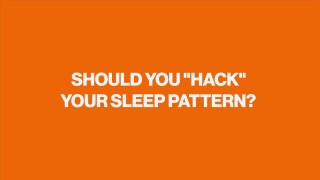 Should you “hack” your sleep pattern?

Living like a genius and finding ways to "optimize" sleep is not necessarily good for your health. Here's why.
▸
8 min
—
with
Vanessa Hill

VANESSA HILL: Sleep is essential for our bodily functions, for our learning and memory, to keep our brain and body healthy. So, that is one reason to remember that sleep is super important. We have been doing it since the dawn of time. So there are different types of sleep patterns and what you normally engage in every single night is called monophasic sleep. That's when you just sleep in one chunk whether it be six hours or eight hours. I hope that you are sleeping more than seven hours a night because that's the scientific recommendation. That's called monophasic sleep. But, we haven't always been this way. There is some evidence to suggest that people in pre-industrialized societies used to sleep in what's called biphasic sleep patterns, which is when they have two chunks of sleep over a 24 hour period. And there's also something called polyphasic sleep which is a pattern where you sleep in three or more phases over the course of a 24 hour period.

So you do vary in this pattern throughout your life. Newborn babies, for example, are great polyphasic sleepers. They sleep for two hours and then awake for an hour and then asleep for two hours. They're asleep most of the time except it's in three or more periods over a 24 hour cycle and then that kind of changes into a monophasic sleep by the time they're five or six years old and they stop napping during the day. Sometimes when elderly people can't sleep in one chunk they do engage in a biphasic sleep pattern where you have two sleeps throughout the day.

For you when you fall asleep it seems like you're unconscious. You don't really know what's going on but there is a lot that is happening in your brain. So, there's four different stages of sleep. Two are light sleep and then there's deep sleep and REM sleep. You cycle through these different stages roughly every 90 minutes on average over the night, but your sleep cycle can vary from 60 minutes to 120 minutes depending on the person. When you fall asleep you cycle through these two stages of light sleep, then deep sleep and REM sleep and over the course of the night you'll go through a number of these sleep cycles. Now, something that is really interesting is people sometimes think that you're getting the same amount of sleep when you're in each of these different stages of sleep, but you actually get more deep sleep in the first half of the night and then more REM sleep in the second half of the night. You do change how much time you're spending in these different sleep stages over the course of the night.

It's natural for us to vary in these patterns across the course of the lifespan but monophasic sleep is the most beneficial for adults where you're sleeping in one chunk throughout the night. That way you can progress the most naturally through all of your sleep stages and spend the best amount of time for your body in all of those different sleep stages though there is kind of a rising fad, almost like a fad diet but for sleep. You could call it, I don't know, a fad sleep diet where a lot of adults who should probably be sleeping in monophasic sleep want to try out biphasic or polyphasic sleep to try to hack sleep to get the best out of sleep in a smaller amount of time which is actually quite concerning because you can't really do this with sleep. Something that is different is that our ancestors did have some different sleep patterns so biphasic sleep is one I mentioned before is when you actually sleep in two periods instead of one eight hour chunk. It's thought that this was really common in hunter-gatherer societies for reasons of protection. If you have one person asleep and another person awake they can watch out for any potential threats. Also, in pre-industrialized society there wasn't an emphasis on the eight hour workday or then what was probably the 10 or 12 hour workday where people only had a certain amount of time to get all of their sleep, particularly in areas that were quite warm and agriculture heavy people would have a siesta and nap for one or two hours in the middle of the day and then have a shorter sleep at night. It thought that biphasic sleep was a lot more popular in pre-industrialized societies. It doesn't mean that everyone did it but there are a lot of records of a first sleep and a second sleep and people doing a lot of creative work in between those in the middle of the night as well.

Now with a lot of us working nine to five jobs, perhaps pre-2020 we were working nine to five jobs. That really encourages people to have a monophasic sleep schedule where they're sleeping in one big chunk. So some people who do creative work may sleep in a shorter chunk throughout the night and then have naps during the day. I have tried this a little bit and find that I am just really groggy throughout the day if I am napping and then waking up. It is recommended that you get seven hours of sleep at once throughout the night. So if you are going to try this please make sure you are getting your seven hours and then you could supplement that with a nap throughout the day as well. Sleep is very personal and there are some weird and wonderful stories of historical figures adopting some pretty wild sleep patterns. One of the most famous ones is Nikola Tesla who is reported to have only slept for two hours a night. It is I will say very difficult to find out how much sleep historical figures were getting because there's not a lot of sources that actually tell us scientifically what was gong on with them. But there is one biography that says Tesla would get four to five hours of rest a day but he would only sleep for two hours of that time that he was resting. So he engaged in this pretty extreme form of polyphasic sleep called the Uberman sleep schedule where he would actually sleep in 20 minutes naps over the course of the day so he would get two hours sleep by the end of the day.

Another person who followed this very strict polyphasic sleep pattern was Leonardo da Vinci who reportedly did 20 minutes naps every three to four hours so I think it's tempting to say I want to sleep like a genius. I'm only going to get two or three hours sleep and what that will do is wreak havoc on your brain. I think there are these fads that a lot of celebrities or geniuses follow. An example that I love to give is that Steve Jobs was a fruitarian but it doesn't mean we should all go away and only eat fruit because that would be really bad for our digestive system and our diet and no nutritionist or dietitian would ever recommend just eating fruit. So the kind of same thing applies to sleep. No one would recommend that you try to get two hours sleep a night because it can be really damaging for your health. It's reported that Winston Churchill also slept for five or six hours a night and then he would take a nap after having a glass of whiskey. This is a good time to talk about alcohol because alcohol can help you fall asleep really quickly as was the case with Churchill, but it can actually limit how restful and restorative your sleep is so you don't get as much deep sleep after you've had alcohol which is really good quality sleep where your heart rate slows down, your breathing is really slow and your brain is really cleaning up a lot of plaque and other more toxic things that get produced during the day doing a big waste removal.

So, when you do have alcohol you probably know from when you hang up and have that nasty little thing called a hangover that the sleep you get isn't as restorative as when you don't drink alcohol. I think something that's really important to think about when we're looking at these sleep patterns of historical figures is that Nikola Tesla, Leonardo da Vinci, they never had to drive a car. They never had to operate heavy machinery. They never had to do a lot of the things that we do in our modern world. And when you get less than six hours of sleep a night your risk for having a car accident increases by a lot. So please take that into consideration as a general safety message that if you're thinking about doing one of these things it really puts you and other people at a lot of risk which is something that Tesla didn't have to think about. I think it's where educating more people about the importance of sleep and sleep health and people start to think about how they can make changes to it kind of like having a fad diet or something like that. How can we optimize sleep? How can we get more out of sleep in a shorter amount of time?

And putting a lot of emphasis on this hustle culture that we need to be productive all of the time. Sleep is the one thing that you do not need to optimize other than making sure you don't have light in your bedroom, it's a nice, cool temperature for you to sleep in and that you're comfortable and getting good quality sleep. Please don't feel like you actually need to hack your sleep or make it better. If you're sleeping well, keep doing what you're doing.

If you enjoyed this video please check out my video on my channel BrainCraft on lucid dreaming. There will be a link down in the description.

Inside the brains of psychopaths