With quantum computing looking so promising, scientists have been studying how to store and transmit quantum-scale data. There looks to be a limit to how far quantum data can maintain its integrity when passed through fiber optic cabling — about 100 kilometers — and so scientists plan a sparkling new internet of diamond repeaters, each of which captures and passes along quantum data to the next network node. They’ve known for a while that artificial diamonds manufactured a certain way can hold that quantum data. However, storing and transmitting it seems to require different diamond structures, making the sparklers’ use for this purpose problematic. Until now, that is, with the announcement in the July 6 issue of Science of a new designer diamond engineered by a team from Princeton. 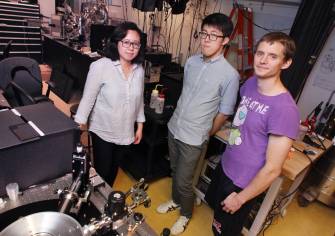 Quantum data is registered with the presence of an atom representing an “up” spin state and an adjacent empty space serving as a “down” spin state. In classic-computing bits, a bit is either one of two possible states, a 1 or a 0, but in quantum “qubits” there are three: up, down, or also both at once, allowing for three possible values. This allows for substantially more complex computations, part of what’s got everyone so excited about quantum computing. (The other part being the potential for entangling qubits.)

Previous research has studied the replacement of individual carbon atoms in a diamond with one nitrogen or silicon atom plus an empty space — together called a “vacancy.” But the resulting diamonds were good at storing data or transmitting it, but not both.

Diamonds that employed nitrogen vacancies did successfully maintain their qubit states for a sufficient length of time — only in the quantum realm could the ability to hold something for milliseconds be considered “long-term” storage — but getting the qubits back out in photons was a no-go. Nitrogen emits photons across a broad frequency spectrum, masking the qubit data so that it was unintelligible about 97% of the time.

Silicon vacancies didn’t have this problem since they emit a clean photon output. Their problem is that they could hold onto the qubits for scant, useless, nanoseconds, after which the qubit state was somehow being lost.

One new designer diamond to rule them all 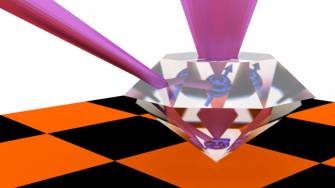 The Princeton team decided to look into the electrical properties of silicon vacancies to try and figure out why their retention of data was so poor. Theoretically, silicon atoms should be neutral electrically, but the researchers began to suspect that impurities in the gem were destabilizing the silicon vacancies’ spin, causing it to be unable to hold onto its qubit state.

Working with industrial diamond company Element Six, they began to explore ways to develop silicon vacancies that could be electrically neutral. The company fabricated a diamond by laying down layers of carbon atoms with added boron atoms that could eventually block impurities from spoiling the silicon vacancies’ neutral charge.

Lead researcher Nathalie de Leon says, “We have to do this delicate dance of charge compensation between things that can add charges or take away charges. We control the distribution of charge from the background defects in the diamonds, and that allows us to control the charge state of the defects that we care about.”

The silicon vacancies were added to the diamonds next. Finally, the crystals were heated at high temperatures to burn out lingering, and potentially problematic, impurities.

The result? The silicon vacancies in the resulting diamonds did indeed remain stable, nearly equalling nitrogen by holding qubits for roughly a millisecond. At the same time, they were able to take advantage of silicon’s good habits, emitting photons cleanly, with 90% of them being produced at the exact same frequency, a boon for easy detection.

The Princeton team’s new designer diamond marks a major breakthrough, though there are still plenty of issues to resolve. For example, their next goal is to design and build an interface between their boron-stabilized silicon vacancies and the photonic circuits that will someday carry the diamonds’ qubits forward in our sparkling new quantum internet.

The 12 boys and their soccer coach who were trapped in a flooded cave in Thailand have all finally been rescued, ending an 18-day ordeal that gripped local and international onlookers.