Whatever their role in the ecosystem may be, the Aedes aegypti mosquito is downright dangerous to humans, its bite being the vector for dengue, Zika, chikungunya, and yellow fever. Loathe as we may be to mess with nature, these bugs are unquestionably — if unintentionally — messing with us. Now Verily, Alphabet’s life sciences division, MosquitoMate, and the Consolidated Mosquito Abatement program of Fresno, CA, are partnering in the Debug Fresno pilot program to reduce the city’s population of Aedes aegypti. 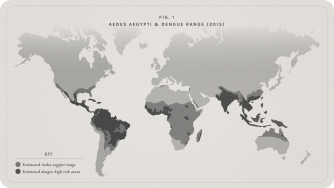 The Debug project began in July 0f 2017 with the release of a million male Aedes aegypti carrying a bacteria, Wolbachia, that causes sterility in female Aedes aegypti. The releases will continue for 20 weeks, until 20 million males have joined the Fresno mosquito population. (As of this writing they’re almost halfway through.) Locals will see a short-term increase in the mosquito population, but males mosquitoes don’t bite. And, while upsetting an existing ecosystem is always a concern, the Debug team notes that Aedes aegypti are an invasive species in the area, and thus, reducing their numbers is not expected to cause any problems for local bats, bees, or birds. 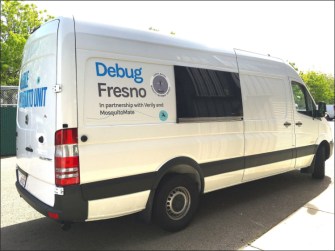 The project is using MosquitoMate’s “sterile insect technique,” a method of insect population control that doesn’t involve the use of insecticides. Instead, male mosquitoes that have Wolbachia are introduced into a population where they eagerly mate with wild females — what happens, though, is that the resulting eggs never hatch due to a cytoplasmic incompatibility with Wolbachia. This quickly reduces the size of the next mosquito generation, and thus their population overall. The males haven’t been genetically modified in any way, nor have their Wolbachia bacteria.

Wolbachia is an extremely common bacteria in the insect world, estimated to occur in around half of all species. (It can’t be transmitted to warm-blooded animals like us.) Male mosquitoes make an exceptionally good tool for population control, of course, because first of all, they don’t bite, so they can be introduced into an area without bothering people or other animals. And second, nothing is better at finding female mosquitoes than male mosquitoes.

MosquitoMate has held successful trials of their sterile insect technique in Kentucky and New York, and elsewhere in California, achieving an over 80% reduction in mosquito populations.

Verily’s role in the project involves leveraging the cutting-edge tech at their disposal as a branch of Alphabet, formerly Google. The Debug website explains, “Our team is developing new technologies that combine sensors, algorithms and novel engineering to raise millions of these sterile mosquitoes and quickly and accurately sort them for release in the wild.” In addition, Verily is also “building software and monitoring tools to guide mosquito releases and new sensors, traps and software to better determine which areas need to be treated and re-treated.”

Fresno became interested in the project after Aedes aegypti arrived in nearby Clovis in 2013. The effect was immediate, with a noticeable increase in bites from this invasive, aggressive strain. The Aedes aegypti currently in California aren’t carrying any of the diseases they’re capable of carrying, but the community decided to try and get ahead of the problem.

Two areas heavily infested with Aedes aegypti have been selected for the Debug Fresno releases: Fancher Creek and Harlan Ranch.

Emotions Pass Along A Friendship Network Like a Contagion, Study Finds

Even things like appetite and tiredness move through social networks, researchers found.