Earlier this month, SpaceX’s Falcon Heavy emerged out of earth’s atmosphere and delivered a cherry red Tesla Roadster into space. The launch was televised, photographed, and, for a few hours at least, live streamed from a camera mounted on the hood of the car, which as of February 16 was tumbling through space at speeds upwards of 75,000 mph.

But despite the mass coverage, one man wanted a different kind of shot of the Roadster.

“…once footage of the car and Starman started to arrive and people wondered if it could be observed from Earth, there was just one thing in my mind: to find the answer to that question and if yes, to try take a picture – better yet, a video – of it,” wrote astrophotographer Rogelio Bernal Andreo on his blog Deep Sky Colors.

Two days after the launch, Andreo started tracking down the Roadster’s ephemeris, which is basically an astronomical itinerary that gives the precise locations of space objects over time.

“Luckily, NASA’s Jet Propulsion Lab, which produces ephemerides for thousands of celestial objects, had just added the roadster to their list, designated 2018-017A,” Andreo wrote.

Andreo mapped out the ephemeris on a software application he uses to control his telescope rig, which consists of three telescopes, electronic equipment, two cameras, and an ultra-sensitive mount that’s able to move the rig with “hair-thin precision.” 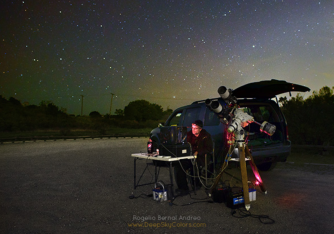 Late on the night of February 9, Andreo set up his rig in a field outside of his hometown of Sunnyvale, California in an attempt to photograph the Roadster, which then was about 500,000 miles away from earth. But by 5:15 a.m. he had seen nothing. He packed and left. 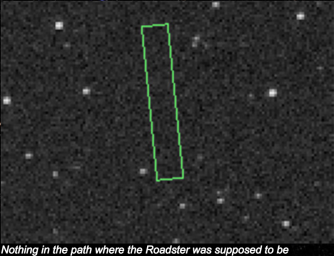 After a nap, he checked his data again. Still nothing. Then he realized he had made a mistake – after all, amateur astrophotography might not be rocket science, but it’s still pretty complicated.

“Then it hit me!! When I created the ephemeris from the JPL’s website, I did not enter my coordinates!! I went with the default, whatever that might be! Since the Roadster is still fairly close to us, parallax is significant, meaning, different locations on Earth will see Starman at slightly different coordinates. I quickly recalculate, get the new coordinates, go to my images and thanks to the wide field captured by my telescopes… boom!! There it was!! Impossible to miss!! It had been right there all along, I just never noticed!”

Here’s the raw footage of what he captured.

And a polished version.

Andreo wrote that astrophotography has many different applications.

“I utilize technology that allows me to capture ancient photons so that I can later process and create my own interpretation of the data captured, effectively blending art and science like not many other disciplines do, but I don’t usually track “small pixels in space” (aka comets, asteroids and yes, even spacecraft) as some of my peers do. Yet, surely enough, comes the day when someone decides to launch a cool red car “driven” by a dummy in an astronaut costume, I had but to go for it! Yeah, red sports cars make even tiny pixels look cool!”

Related
Starts With A Bang
The galaxy cluster that broke modified gravity
19 years ago, the Bullet Cluster provided an empirical proof for dark matter. Even today, modified gravity still can’t explain it.
Neuropsych
Psychology studies that go viral are likelier to be bogus
A new 20-year analysis of over 14,000 psychology studies finds that a study’s media coverage is negatively linked to its replicability.
The Future
How a device transmits radio waves with almost no power
Apart from the energy needed to flip the switch, no other energy is needed to transmit the information.
The Present
Radical idea: Redraw the U.S. map as a nation of city-states
While cities drive national economic growth, their political geography means they cannot effectively deal with inequality, poverty, and other socioeconomic problems.
The Learning Curve
Why do high IQ people stagnate in their careers? Emotional intelligence
Research suggests that emotional intelligence is more vital for success than IQ.
Up Next
Surprising Science
Elon Musk quietly plans to put 11,925 satellites into orbit
Elon Musk and SpaceX plan an “internet in space” consisting of 11,295 satellites that are about to begin launching.