Millions of people watched on Tuesday as SpaceX’s Falcon Heavy, the world’s most powerful rocket since Saturn V, launched out of the atmosphere, delivered a Tesla Roadster into space, and then, in three separate pieces, descended back to earth. It was exciting. It was awe-inspiring. It was a grand spectacle.

But most of all, it was a sham.

The revelation comes from the Flat Earth Society (this one, not this one), and it tells of how Elon Musk’s recent foray into space was an intricately planned hoax, just the latest in the decades-long “globularist” conspiracy designed to fool the world into believing that Earth is round.

“It certainly is interesting to see the shift of focus in space programs from official government organisations to privately-run organisations,” Pete Svarrior, a moderator on the society’s website, wrote in a blog post. 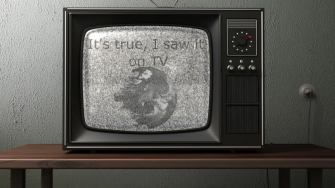 Interesting indeed. The society proposes that people’s willingness to believe things they see on the internet is just a new version of the old phrase “It’s true, I saw it on TV!”

People who believe that the Earth is a globe because “they saw a car in space on the Internet” must be the new incarnation of “It’s true, I saw it on TV!” It’s a poor argument.

Why would we believe any privately-held company to report the truth?
— Flat Earth Society (@FlatEarthOrg) February 7, 2018

Forget, for a moment, the fact that the once-fledgling Flat Earth Society found new life after thousands of people were able to “see it on the internet" in the early 2000s. And never mind the tweet's curious implication that we should be extra skeptical of “privately-held" companies while assuming government-controlled organizations are more trustworthy.

There's a bigger issue at hand: beloved inventor and entrepreneur Elon Musk is a crook.

Wake the hell up.

Even Apple cofounder Steve Wozniak “doesn't believe anything" Musk says, as Svarrior noted by citing an article in which “The Woz" expressed doubt over the quality of the technology in Tesla cars.

There's reason to doubt Tesla. The company says its cars use GPS to navigate. Why is that a problem? GPS technology, which relies on a network of satellites to triangulate positions on the ground, is based on the assumption that Earth is round. Maybe that's why Tesla cars keep crashing into fire trucks and stuff.

“I would like to appeal to everyone, Round Earther and Flat Earther alike, to exercise more caution when approaching online content," Svarrior wrote, going on to suggest (grab a pen because you'll want to write this one down) that everyone should “Exercise critical thinking."

Still, even Svarrior can't deny that Musk has a knack for marketing.

We are likely to see the first humans walk on Mars this decade.
The Present

When we look at the night sky, we may see junk instead of stars.
Hard Science

A strange object found in the desert has prompted worldwide speculation.
The Present

How many hurdles stand in the way of hyperloops becoming a commercial reality?
Hard Science

The Earth is not flat. Here’s how you can prove it.
Up Next
Culture & Religion

Neither a borrower nor a lender be: But how many ideas did Shakespeare himself ‘borrow’?

The game is afoot! It seems Shakespeare borrowed language from his contemporaries more directly than we previously realized.