Back in the hottest days of the Cold War, we’d be sitting around watching TV or listening to the radio and that eerie screechy tone would come on, followed by a message from an ominous voice.

“This is a test. For the next 60 seconds, this station will conduct a test of the Emergency Broadcast System. This is only a test.“

The announcer told us that “if this had been an actual emergency,” we would have been told what to do, and then normal programming resumed, and we forgot all about it. Thank God the announcer never had to tell us what to do. The system was created to alert us to nuclear war.

The government’s emergency-notification systems have come a long way since the ’50s, morphing to keep up with changing technologies and changing threats. The newest component of that system, the Wireless Emergency Alert (WEA) system debuted not long ago, and, wisely, it’s designed to contact us on our cellphones, since that’s how more and more of us communicate and stay connected. The problem is, the people who designed the system put a lot of thought into how to reach us, but too little thought into what their emergency messages should say. And some recent research suggests that as a result of focusing on the technology of the system, but not its content, the new cellphone-alert system won’t do what it is supposed to do: keep us safe.

The problem is the length of the message; 90 characters. That’s all, to tell you what’s happening, where, what you should do, how to get more information, and who is sending the message. The reason the message is limited to basically two-thirds of a tweet is that the law creating the system made participation for cellphone carriers voluntary. These companies paid zillions of dollars to license the frequencies they use. The cellphone companies want people to pay for transmission of their messages — not to give away some of the bandwidth they’ve licensed, for free. To get cellphone companies to participate at all (and a few of them still don’t), the federal government compromised on a message limit of just 90 characters.

Compounding that problem, the federal government spent years setting up the technical aspects of the system, but only just before it was to go into operation did they start paying attention to what the messages should be. I was one of several risk communication experts who offered general suggestions at a National Academy of Science symposium in 2010. And actual research of messages wasn’t done until the system was already up and running (it started in 2012). The findings from that research (which was conducted by START, the National Consortium for the Study of Terrorism and the Responses to Terrorism) are predictable; the messages have problems, and the biggest problem of all is that they’re too short.

Imagine if you saw this example. 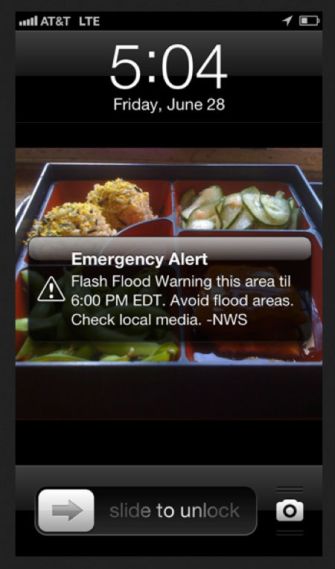 “…this area”? Which area? “Avoid flood areas?” Where are they? And who is NWS?

Or this one message, tested in the research;

Researchers showed test messages about “an active shooter,” a weather emergency, and a radiological emergency, to hundreds of people. Most people said that in response to seeing that strange message on their phone, they’d wait and try to get more information. Study subjects said the messages probably would not prompt them to immediately take the suggested action. In the case of an actual threat, that delay would leave huge populations at risk.

Researchers suggested things that would help;

But mostly the research found that 90 characters just is not enough.

… limited length constrains public understanding of the message source; it is not immediately clear for some recipients whether the message is meant for them; the key content elements of guidance (describing what to do and how to do it) and hazard (describing why they should do it) cannot be adequately communicated

… consideration should be given to increasing the character limit of WEAs to a length that could optimize protective-action taking and technology constraints.

The Wireless Emergency Alert system is just one of many cellphone-based alert systems being established at local and state levels or by universities, companies, or other organizations (for a good summary, see here). They are all still working out many challenges; what sorts of emergencies should be included, how to make everyone aware of these new systems so the messages aren’t strange when they pop up on the phone, how to get every phone manufacturer and cellphone carrier to participate (not all phones are equipped to receive WEA messages.)

But the biggest challenge of all is to figure out how to word the message so it has maximum effect. Solving all the other problems won’t help much without effective messaging. Let’s hope the research that found that 90 characters just won’t get the job done provides the federal government with evidence they can take to the cell phone carriers to allow for longer messages. And if the companies balk at providing more bandwidth, perhaps they should be required to, as part of the license the federal government grants for using public airwaves in the first place.

Scientists ranked countries on their end-of-life care. The U.S. fared poorly.
Up Next
Culture & Religion

Google Working on a System to Rank Pages Based on Facts, Not Links

Google wants to stop the spread of misinformation by changing the way it ranks pages — concentrating more on facts rather than links.