If you’ve been outside lately, you’ve probably guessed this yourself. 2016 is on pace to be the hottest year on record.

As reported by the the World Meteorological Organization (WMO), global temperatures in the first six months of this year are shattering records.

The average temperature for the first half of 2016 was 1.3°C, which is 2.4°F warmer compared to the pre-industrial era in the late 19th century when we began this kind of records-keeping.

Here’s what all this temperature drama looks like, according to the Global Mean Surface Temperature chart from NASA: 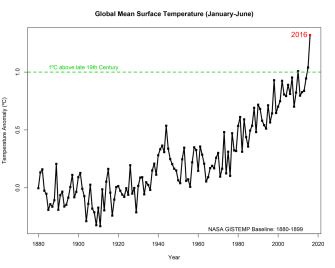 And here’s another way to look at this, in terms of how this year stacks up against the previous hottest years: 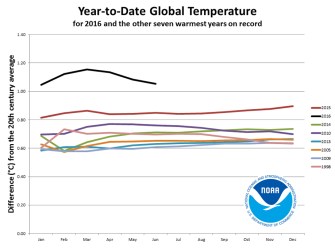 The Secretary-General of WMO, Petteri Taalas, put it this way:

“Another month, another record. And another. And another. Decades-long trends of climate change are reaching new climaxes, fuelled by the strong 2015/2016 El Niño.”

And if you’re quick to blame El Niño, the climate pattern that developed in 2015 and warmed up the surface waters of the Pacific Ocean, you should consider that it’s just part of the puzzle.

The Arctic Sea Ice is melting at an unprecedented level. When compared to late 1970s and early 1980s, the Arctic sea ice now covers 40% less area (when measured during the summer, its peak melting season). 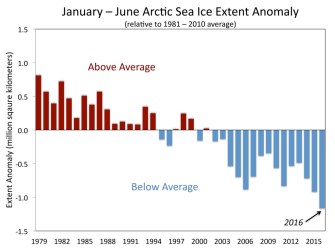 And if you are of the conviction that none of this means anything, here’s another chart to consider – the consistent rise of carbon dioxide levels across the globe: 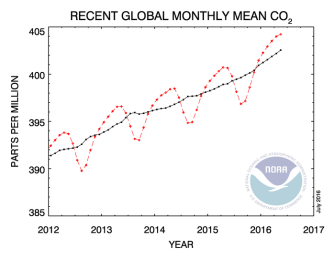 And if you need further proof that all this is causing weather anomalies across the globe, consider this helpful infographic from NOAA (National Oceanic and Atmospheric Administration):

The uptick in Arctic lightning could cause more wildfires, potentially triggering a feedback loop that releases massive amounts of carbon into the atmosphere.
Hard Science

The ESO finds another exoplanet that’s definitely not a place for us to go.
Hard Science

We may have to abandon concrete to fight climate change, architectural experts say

The building material seems so ubiquitous — what can we use in its place?
The Present

A grim warning for the future of Iceland’s glaciers.
The Present

High in the Alps, where it’s ‘not supposed to melt,’ a rare glacial pond has been discovered

It is rare for them to form, nonetheless reach this size.
Up Next
Culture & Religion

The Chilling, Untold Tale Behind the Most Pivotal Rock Song Ever

Modern detective work reveals the haunting story behind one of the most important rock records ever: Elvis Presley’s “Heartbreak Hotel.”