Most of us are familiar with Elvis Presley’s “Heartbreak Hotel,” but few people realize the critical role this one record played in rock history. Not only was it the breakthrough to superstardom for regional sensation Presley, but its impact on the next generation was huge. John Lennon, Paul McCartney, George Harrison, Elton John, Keith Richards, and Robert Plant all date their souls’ commitment to music from the very moment they first encountered the record. Years later, Lennon recalled, “When I heard it, it was the end for me.”

It’s a weirdly haunting song, and for years people grilled the late songwriters, Tommy Durden and Mae Boren Axton, about where the idea came from. The fact is, they didn’t know. They said its source was a Miami Herald newspaper article about an unknown man who committed suicide and left a note including the phrase, “I walk a lonely street.” Axton told Ada, Oklahoma’s Evening News in 1956 that the songwriters decided, “Let’s put a heartbreak hotel at the end of that lonely street.” The problem is, there was no such article in the Miami Herald, and no such suicide.

Songwriting is always a mysterious process. Where do melodies and lyrics come from? Paul McCartney famously woke up one morning to find the entire song “Yesterday” at his fingertips when he sat down at the piano (though he called it “Scrambled Eggs” for a while).

Researchers, working through digitized archives, have just solved the mystery of “Heartbreak Hotel.” The man walking down lonely street was Alvin Krolik. 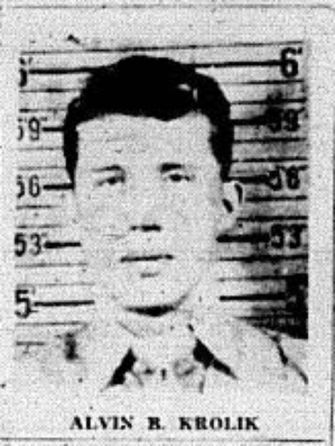 The story started when Krolik turned himself in to Chicago police in 1953 as the armed robber behind a string of liquor store and hotel burglaries. The former Marine Corp judo instructor, would-be artist, and author impressed the police with his forthrightness and his detailed explanation of the crimes in which he’d been disguising his facial features using oil paints.

The police alerted the Chicago Daily Tribune, which ran a story and photo. 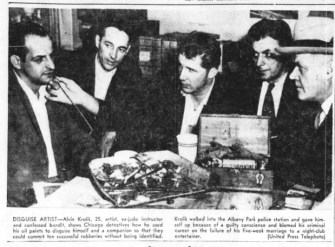 Krolik explained that the spark for his crime spree was the five-week failed marriage to a nightclub accordionist name Agnes Simpson that had broken his heart. 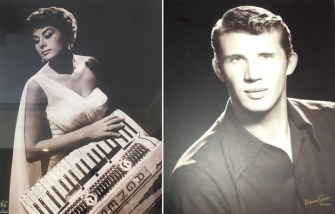 His story has picked up by other outlets some versions carried the following quote from his unpublished autobiography.

“If you stand on a corner with a pack of cigarettes or a bottle and have nothing to do in life, I suggest you sit down and think. This is the story of a person who walked a lonely street. I hope this will help someone in the future.

Unfortunately, Krolik wasn’t really done with crime as he’d claimed, and after staying on the right side of the law for a while, he was killed in an attempted robbery of the Busy Bee Liquor & Tackle Store in El Paso Texas, in the summer of 1955. 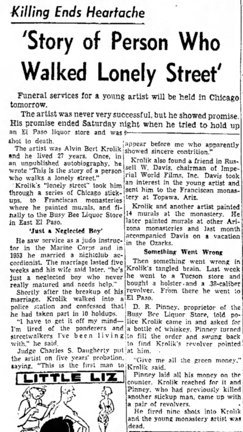 A reporter connected the dots between this fatal encounter and the earlier articles about Krolik, wrapped it all up into one tawdry, compelling narrative, and the story ran in at least a dozen papers in throughout the West and South. Burden and Axton no doubt read one of these accounts in northern Florida — not in the Miami Herald, after all — because she presented Elvis the song that very summer. 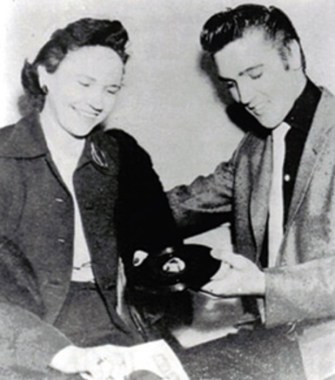 In January of 1956 Presley agreed to record the song — getting himself an unearned third-songwriter credit in the process — and the future of rock n’ roll was assured.

These hard-to-finish books are still worth the effort.
Up Next
The Past

Modern terrorism has roots in a mythical sect of assassins from the time of the Crusades.