As card-carrying members of the universe’s exclusive Terrestrial Existence Club, we don’t give the Devonian period near enough credit. Beginning 416 million years ago, this period of the Paleozoic era blazed the trail toward manufacturing a surface habitable to life.

New plant species evolved that could survive on dry land. The fresh-faced forests drew carbon dioxide from the atmosphere, beginning a process that would drastically refashion the planet’s climate. Insects and arachnids proliferated, while early tetrapods flirted with land’s safety in the newly-formed wetlands – allowing many animal ancestors to escape the mass extinction event soon to devastate the Earth’s oceans.

Flash forward to 2019, researchers in an abandoned quarry near Cairo, New York, have discovered a 385-million-year-old Devonian forest, the world’s oldest to date. Their findings, published this month in Current Biology, are helping scientists better understand the enigmatic origins of terrestrial life. 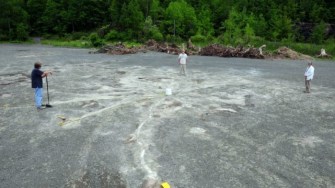 “The Cairo site is very special,” paleobotanist Christopher Berry, a team member at Cardiff University, told Science. “You are walking through the roots of ancient trees. Standing on the quarry surface, we can reconstruct the living forest around us in our imagination.”

Eospermatopteris was a palm tree-like plant well-represented in the Devonian fossil record. These trees had lofty trunks that crowned into “branchlets”—effectively frond-like groupings of stalks that were photosynthetic yet predated broad, flat leaves. They reproduced by spores and sported a rudimentary root system with a limited range. 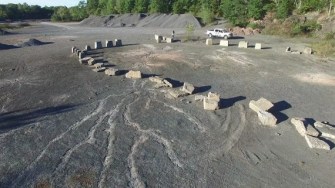 The fossilized remains of the world’s oldest fossil forest in the abandoned sandstone quarry.

Archaeopteris’ appearance at the Cairo site means the genus took root roughly 20 million years earlier than previous estimates. The discovery helps clarify the enigmatic evolution of trees and forests during the Devonian period, as well as the indelible ripple effect they had on Earth’s ecology, geochemical cycles, and atmospheric makeup.

As for the third specimen, it is represented by a single obscure root system. The researchers postulate it may belong to the class Lycopsida, a.k.a. “scale trees.” These trees dominated the Late Carboniferous coal swamps, and the oldest fossils date back to the Late Devonian. However, like Archaeopteris, its presence at the Cairo site may push current estimates deeper into prehistory.

“Our findings are perhaps suggestive that these plants were already in the forest, but perhaps in a different environment, earlier than generally believed. Yet we only have a footprint, and we await additional fossil evidence for confirmation,” William Stein, the study’s first author and an emeritus professor of biological science at Binghamton University, said in a statement.

He added, “It seems to me, worldwide, many of these kinds of environments are preserved in fossil soils. And I’d like to know what happened historically, not just in the Catskills, but everywhere.”

When and how trees began evolving modern root and vascular systems, as well as their upright habit, remain a mystery. But Archaeopteris’ elongated rooting systems appear identical to trees that would become numerous in the Carboniferous period’s vast swamp forests.

As trees evolved these root systems, they began pulling carbon dioxide from the atmosphere and turning it into carbonate ions in groundwater. These ions then flowed into the oceans where they were locked away in limestone, preventing them from re-entering the atmosphere. This development added a new wrinkle to Earth’s substance turnovers.

The effects were of first order magnitude, in terms of changes in ecosystems, what happens on the Earth’s surface and oceans, in global atmosphere, CO₂ concentration in the atmosphere, and global climate. So many dramatic changes occurred at that time as a result of those original forests that basically, the world has never been the same since.

Today, Devonian plants and their Carboniferous progeny are again altering the Earth’s climate, but in a way that is making the world less hospitable to life.

After being buried for millions of years, the remains of these giant plants transformed under the heat and pressure to create the large reserves of coal that drove the Industrial Revolution. In fact, the name “Carboniferous” references to the rich coal deposits found in this geologic layer and literally means “coal-bearing.”

As we continue to burn these ancient fossil fuels, we release the carbon dioxide they trapped back into the atmosphere, where they heat up our planet by way of an enhanced “greenhouse effect.” Ironically, it seems powering our planet with these plants’ remains is undoing the hard work the world’s first forests endeavored.

Here’s why mega-eruptions like the ones that covered North America in ash are the least of your worries.
The Future

Photosynthesis is powerful but very inefficient. Humans can improve on this biochemical process to help the planet.
Life

Here’s what the weather phenomenon baking large parts of the country actually means.
Up Next
Hard Science