Maybe you’ve wondered, as I have, how it could possibly be that all of the different types of cells in our bodies are made up of the same DNA chemical bases: adenine (A), guanine (G), cytosine (C), and thymine (T). These chemicals pair off into A/T and C/G base pairs which then form into sequences, or “genes.” So how could the finite number of possible sequences create such a wide range of things, from eyeballs to teeth, hair to heart muscle? 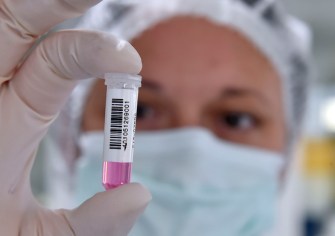 A lab technician handles a sample of DNA at the Genetic Institute Nantes-Atlantique (IGNA) on December 10, 2015 in Nantes, western France. The Genetic Institute Nantes-Atlantique (IGNA) is one of the first French laboratories of forensic expertise to use DNA evidence to establish the physical characteristics of a suspect and so his ‘genetic sketch,’ can be used as a ‘support tool ‘ in an investigation. (GEORGES GOBET/AFP/Getty Images)

Every cell contains a sequence of some six billion base pairs that are just under 79 inches long(!), or two meters, in length. To fit into something as small as a cell, it’s folded in on itself into a dense bundle—containing about 10,000 little loops—called a nucleosome. The answer to the question above—and it’s something geneticists have known since the 1980s—is that what’s produced by a DNA strand is determined by the way the sequence is folded. The base pairs that wind up on the outside of the nucleosome are expressed as proteins and influence the cell’s characteristics, while the ones folded away into the inside aren’t and don’t.

The obvious question is what determines how a sequence is folded. It turns out specialized proteins in the DNA form a kind of “second layer” of information—really, mechanical cues—that determine how it will fold. 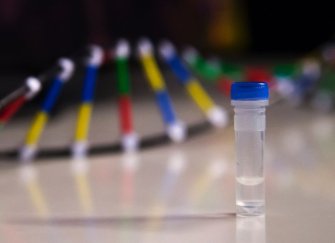 A vial containing a few droplets of water — and one million copies of an old movie encoded onto DNA — is displayed during a media tour at Technicolor’s Sunset Boulevard studios in Hollywood, California, March 30, 2016. (ROBYN BECK/AFP/Getty Images)

Now physicists at Leiden University in the Netherlands have confirmed the presence of this second layer of instructions via computer simulations of baker’s yeast and fission yeast sequences, with various mechanical cues added randomly as a second level of information. The genes in their simulations expressed differently, as expected, based on what was folded to the outside and what wound up on the inside.

Most exciting is the promise that Leiden’s work could herald the beginning of simulations that would allow future scientists to manipulate folding to, say, move a person’s destructive, disease-causing genes to the inside of cells where they’ll do no harm. A very different way to help keep us humans healthy.

The origin and phylogeny of the Yaravirus are not yet clear.
Up Next
Starts With A Bang

Ask Ethan: Is the Universe expanding faster than expected?

A selection of some of the most distant galaxies in the observable Universe, from the Hubble Ultra Deep Field. Image credit: NASA, ESA, and N. Pirzkal (European Space Agency/STScI).And if […]