In Lake Pampulha in the Brazilian city of Belo Horizonte, scientists found an amoeba virus unlike anything seen before. Named after Yara, the mother of waters in Brazilian mythology, 90 percent of the Yaravirus’s genome is comprised of genes never before described. Sifting through the publicly available database of 8,535 metagenomes produced nothing like it, and only 6 of its genes seem to be distantly related to known homologs.

While “most of the known viruses of amoeba have been seen to share many features that eventually prompted authors to classify them into common evolutionary groups,” according to the researchers in a preprint paper, Yaravirus is “a new lineage of amoebal virus with a puzzling origin and phylogeny.” 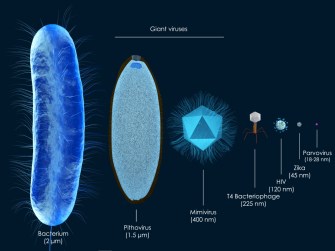 Giant viruses compared in size to to other common viruses and bacteriaImage source: Meletios Verras/Shutterstock

The recent discovery of “giant viruses” — a group to which Yaravirus doesn’t belong — has revealed that the organisms are capable of things previously thought beyond their reach.

To begin with, the giant variety is roughly 10 times larger than, say, the influenza virus. With that size comes complexity, too — the flu virus has 11 genes, while a giant virus can have as many as 2,500. And that complexity has turned thinking about viruses on its head.

Conventional wisdom had been that viruses were relatively disorganized agglomerations of stray genetic material incapable of reproduction, and thus dependent on host cells for sustenance. It was previously believed that hijacking their host’s metabolisms was the only way that they could survive, and that they were so incredibly simple that they weren’t universally considered to be “alive.”

Giant viruses, which derive their name from their oversized protein shell or capsid, have genomes complex enough to engage in the synthesis of proteins. They are also capable of DNA repair, replications, transcription, and translation, which has changed the way scientists think about these supposedly simple organisms.

For the scientists who found the Yaravirus, virologists Bernard La Scola from Aix-Marseille University in France and Jônatas S. Abrahão from Brazil’s Federal University of Minas Gerais, the discovery is just the latest enigmatic virus they’ve discovered. Last year, they found a pair of giant viruses (two other viral outliers) which they named as two flavors of Tupanvirus: Tupanvirus soda lake and Tupanvirus deep ocean, each after the extreme aquatic environments in which they were found. They belong to the Mimiviridae virus family, shown above. 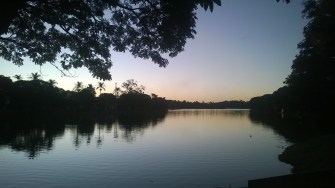 Yaravirus represents the latest surprise in viruses, but it’s not a giant virus —it’s comprised of small particles about 80 nm in size. It’s simply that its genome is so novel.

The paper notes, “Using standard protocols, our very first genetic analysis was unable to find any recognizable sequences of capsid or other classical viral genes in Yaravirus [our emphasis].” This leaves authors LaScola and Abrahão no option but to guess what it is. They suggest that it’s likely to be the first found example of some unknown amoeba virus group, or perhaps a much-degraded version of some unknown giant virus. They can only conclude, “The amount of unknown proteins composing the Yaravirus particles reflects the variability existing in the viral world and how much potential of new viral genomes are still to be discovered.”

Tags
discoverygenetic engineeringgeneticsmicrobesmicrobiologyscienceviruswater
In this article
discoverygenetic engineeringgeneticsmicrobesmicrobiologyscienceviruswater
Related
The Well
Can we condition ourselves to be heroes?
Neuroscientist Robert Sapolsky on the science of temptation, and the limitations of your brain’s frontal cortex.
▸
6 min
—
with
Robert M Sapolsky
Life
Strange life forms create an “alien” ecosystem in an abandoned uranium mine
Slimy biofilms made up of bacterial and eukaryotic life forms have taken over an abandoned, flooded uranium mine in Germany.
Life
Scientists use CRISPR to insert an alligator gene into a catfish
Disease kills off 40% of farmed catfish. This gene protects them.
Health
COVID, RSV and the flu: A case of viral interference?
Viruses, it turns out, can block one another and take turns to dominate.
Life
Most of the seafloor is a thick graveyard of ooze
Each year, several trillion pounds of microscopic silicon-based skeletons fall down the water column to pile up into siliceous ooze.
Up Next
The Present
The precise meaning of emotion words is different around the world
Is the experience we call “love” felt the same in every language?