Today, in a much-anticipated announcement live-streamed by NASA, it announced both an abundance of organic molecules and seasonal, recurrent releases of methane gas into the atmosphere of planet Mars.

Organic molecules are the building blocks of life. According to Dictionary.com, the definition is:

“A molecule of the kind normally found in living systems. Organic molecules are usually composed of carbon atoms in rings or long chains, to which are attached other atoms of such elements as hydrogen, oxygen, and nitrogen.” 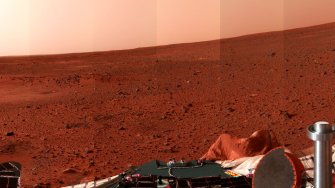 In this handout released by NASA, a Mars landscape is seen in a picture taken by the panoramic camera on the Mars Exploration Rover Spirit January 8, 2003. (Photo by NASA/Jet Propulsion Laboratory/Cornell University via Getty Images)

This does not mean life was discovered on Mars… yet. These organic molecules were found at the bottom of what once was a lake bed, in rocks 3 billion years old. The drill that Curiosity is using is literally just scratching the surface; it goes 5cm deep. So what if scientists were able to drill 10 meters, 100 meters, 1,000 meters? It’s tantalizing.

In addition, NASA recorded methane spikes on the planet Mars, in a form that is repeating rather than random. This is different from previous measurements of methane on Mars, which could not be repeated. This means they can be expected in certain cycles—seasonal, if you will—and therefore, tested. The gas creeps from below the surface up to be released into the Mars atmosphere via riverbeds, cracks, and crevices in the surface of the planet. What’s not yet clear is whether or not the methane is, indeed, biological.

The vast majority of methane on Earth, at least, has a biological origin, so its presence on Mars is significant to the possibility of actually discovering life on Mars.

The search for organic molecules actually began on Mars in 1976 via Viking 1 and II, so the finding of them by Curiosity is an achievement a long time coming. It follows the discovery of organic molecules in 2014 that appeared to be much more sparse.

The Curiosity rover has lasted three times as long as it was intended to and is still going, which helped with the study of seasonal methane cycles.

Another mission, Mars InSight, is heading to Mars right now to study the geological life of the planet.

NASA’a live broadcast has ended, but you can see some of it replayed here:

Related
Neuropsych
Psychology studies that go viral are likelier to be bogus
A new 20-year analysis of over 14,000 psychology studies finds that a study’s media coverage is negatively linked to its replicability.
The Future
How a device transmits radio waves with almost no power
Apart from the energy needed to flip the switch, no other energy is needed to transmit the information.
The Present
Radical idea: Redraw the U.S. map as a nation of city-states
While cities drive national economic growth, their political geography means they cannot effectively deal with inequality, poverty, and other socioeconomic problems.
The Learning Curve
Why do high IQ people stagnate in their careers? Emotional intelligence
Research suggests that emotional intelligence is more vital for success than IQ.
The Present
Even in the age of AI, some problems are just too difficult for computers
Computers are growing more powerful and more capable, but everything has limits
Up Next
Culture & Religion
Study: Muslim Americans living in prejudiced towns more likely to seek out ISIS
New research reveals empirical data on how anti-Muslim sentiment could be nudging some Muslim Americans toward extremism.