One common claim about the “War on Terror” is that the violence, both intended and unintended, from U.S. military forces in the Middle East has served to spawn new terrorists bent on battling the West.

New research suggests a similar phenomenon might be occurring within the U.S., only the American weapons are rhetorical and the terrorists are homegrown.

A paper published in Science Advances describes the discovery of a statistical relationship between U.S. counties with anti-Muslim sentiment and pro-ISIS internet searches. The researchers suggest that prejudice, which can prevent first- and second-generation immigrants from integrating into American culture, could be nudging some Muslims toward extremism.

The hypothesis is based on a sociological concept called group threat theory.

The researchers posited that pro-ISIS sentiment would be highest in areas where people are more prejudiced toward Muslims, especially in places where residents are “ethnically homogeneous or poor.”

There was a problem in getting the data, however: Few people are going to admit, in interviews or on surveys, to being racist or having a desire to join ISIS. So the team instead looked at how often people searched online for phrases like “How to join ISIS” and “Muslims are evil” in every U.S. county between 2014 and 2016. They then cross-referenced the searches with census information about each community’s socioeconomic makeup. 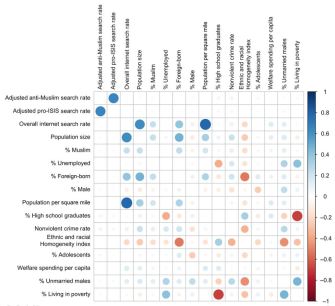 Blue circles describe variables that have a positive correlation with each other. (Credit: Bail et al.)

The results showed that people were more likely to search for phrases like “How to join ISIS” in areas where anti-Muslim searches were high, particularly in poor and ethnically homogeneous communities, as they had guessed.

“These are places where a member of a minority group might be more likely to be visible and perhaps more likely to experience discrimination because of their isolation,” lead author Christopher Bail told NBC News.

The study highlights the need for cautiousness when designing counterterrorism policy, the authors wrote.

“Although elected officials routinely promote counterterrorism policies that target Muslims more than other groups, our findings indicate that these policies may make communities more vulnerable to radicalization if they are interpreted as discriminatory or unfair.

On that last part, the U.S. seems to have an advantage over Europe because it’s more ethnically diverse—Americans are generally less likely than Europeans to view the world in a binary “us versus them” framework, the authors wrote.

Related
The Learning Curve
Why do high IQ people stagnate in their careers? Emotional intelligence
Research suggests that emotional intelligence is more vital for success than IQ.
The Present
Even in the age of AI, some problems are just too difficult for computers
Computers are growing more powerful and more capable, but everything has limits
The Future
How the metaverse will revolutionize K-12 and higher education
Imagine going on a tour through the human circulatory system as a tiny cell. That is just one example of education in the metaverse.
Starts With A Bang
Ask Ethan: What are white holes, and do they really exist?
In General Relativity, white holes are just as mathematically plausible as black holes. Black holes are real; what about white holes?
Life
Strange life forms create an “alien” ecosystem in an abandoned uranium mine
Slimy biofilms made up of bacterial and eukaryotic life forms have taken over an abandoned, flooded uranium mine in Germany.
Up Next
Surprising Science
Want to know where the next Ebola outbreak will strike? Follow the bats
A global Ebola pandemic could cause tens of millions of deaths. To prevent this, researchers at Lehigh University have created a predictive model based on the migratory patterns of bats.