The theory behind the substance graphene was first explored by theoretical physicist Philip Wallace in 1947 as kind of a starting point when he was doing research trying to understand the electronic properties of more complex, 3D graphite. although the name graphene wasn’t actually coined until 40 years later, where it was used to describe single sheets of graphite. In other words, it’s the name given to a flat monolayer of carbon atoms that are tightly packed into a 2D honeycomb lattice; like a molecular chicken-wire that is one atom thick. It’s essentially the basic building block for graphitic materials of all other dimensionalities; it’s a stepping stone to building bigger things. Graphene in itself however wasn’t discovered until 2004 in its full observable and testable form.

Since then, in the past 6 years, scientists have discovered that the substance retains some amazing properties. Some say that it will be heralded as one of the materials that will literally change our lives in the 21st century. Not only is graphene the thinnest possible material that is feasible, but it’s also about 200 times stronger than steel and conducts electricity better than any material known to man—at room temperature. Researchers at Columbia University’s Fu Foundation School of Engineering who proved that graphene is the strongest material ever measured said that “It would take an elephant, balanced on a pencil, to break through a sheet of graphene the thickness of Saran Wrap.”

If you follow my work, you have surely heard me speak about Moore’s Law and the race to find a suitable replacement for silicon semi-conductors. Graphene may in fact be the answer to these problems. The fastest growing problem facing chip engineers around the world is that everyone wants to increase power, make chips smaller and achieve both of these without significantly rising the temperature. The development of graphene transistors would in theory be able to run at much faster speeds and be able to ultimately battle the heat at a microscopic scale.

Just yesterday, two scientists; Konstantin Novoselow and Andre Geim, were awarded the 2010 Nobel Prize in physics for their pioneering work on the discovery of graphene. The award acknowledged graphene’s promise to revolutionize the electronics industry and the potential production of lightweight, stronger-than-steel materials among a long list of other coming applications. Putting things into perspective, Geim states that he would “compare this situation with the one 100 years ago when people discovered polymers. It took some time before polymers went into use in plastics and became so important in our lives.” 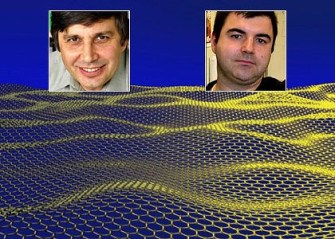 Andre Geim (left) and Konstantin Novoselov (right) and an artist’s impression of a corrugated graphene sheet.

As I stated, this is only a short-list—imagine some of the applications that haven’t been examined yet! Imagine the implications just on the computer revolution alone. IBM has already demonstrated a 100GHz graphene-based transistor and stated that a 1THz processor is on the horizon. The future of graphene holds limitless possibilities into literally every corner of industry and manufacturing, and as the years pass it will likely become a commonplace substance, the way that plastic is today.

That’s funny, because I don’t think that bigots should be senators.[Photo: Gage Skidmore, Creative Commons.]