It’s easy to find news media coverage of risk that plays up the scary and plays down any facts that moderate the scary — or leaves such information out altogether. Finding media alarmism about risk is like shooting fish in a barrel. It is less common to find reporting about risk that not only informs the reader about the danger, but also puts things in fair perspective. Such work should be praised. Such journalists and news outlets should become the sources of information we rely on.

Alison Abbott does a terrific job reporting on the risk of radiation in Nature: “Researchers pin down risks of low-dose radiation.” 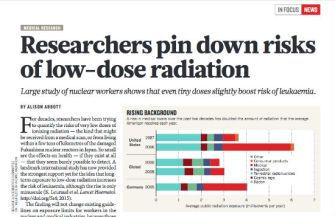 Let’s start with the sub head

“…boosts the risk of leukemia”. Radiation RISK!!! There is definitely something to worry about, to report on, likely to get the reader’s attention. Or as a highly respected science writer put on her Facebook feed, “Take a look at this chart of rising US exposure due to medical scans. Kind of wow.” But wait. Look at the qualifying adverb, right there in the subhead: ”slightly.” And now consider what Abbott tells us, high up in the story, and repeatedly; the risk is TINY, hardly “wow” at all.

In her second sentence, Abbott makes clear that the actual likelihood of harm from low-dose radiation exposure is infinitesimal;

So small are the effects on health — if they exist at all — that they seem barely possible to detect. A landmark international study has now provided the strongest support yet for the idea that long-term exposure to low-dose radiation increases the risk of leukaemia, although the rise is only minuscule.

And she continues in the very next sentence to put the actual health risk of low-dose radiation exposure in perspective.

The finding will not change existing guidelines on exposure limits for workers in the nuclear and medical industries, because those policies already assume that each additional exposure to low-dose radiation brings with it a slight increase in risk of cancer.

(Bear in mind that, as with any risk, exposure, and therefore the overall likelihood of harm, is much higher in occupational settings that for the average citizen, such as you and I from medical radiation. That’s why the study looked at workers in the nuclear and medical fields where any risk that might exist would be more likely to show up.)

And in the first sentence of the next (fourth) paragraph, again, Abbott puts the actual risk in perspective, quoting an independent radiation biologist:

The health risk of low-dose radiation is really very tiny, but the public is very concerned…

Not until all that perspective has been established does Abbott get into the study itself, about the contentious issue of “Linear/No Threshold” (LNT). There is controversy over whether low doses of ionizing radiation (the nuclear kind) cause any health damage at all. Study of atomic bomb survivors have established that even at high doses the risks are small (less than 1 percent increase in lifetime cancer mortality risk), and from intermediate and lower doses the A bomb survivor studies have found no health effects that show up against normal disease rates. (No multi-generational genetic damage either.)

The challenge for epidemiologists is to get a large enough sample of people exposed to low-dose radiation that these tiny doses, of a tiny risk, will show up in that sample. And for that, the sample has to be huge. That’s what this new study has added to the evidence, examining health data from more than 300,000 nuclear energy workers, who wear detection equipment that tracks how much radiation they’ve been exposed to.

Looking at the health records of these workers and comparing health outcomes to doses received, the study shows that even low doses raise the risk of certain kinds of radiologically induced cancers (radiation is not suspected to cause most types of cancer), specifically some leukemias. The increase is small. Curiously, the study also finds that the higher the doses of radiation the workers got, the lower their risk for other radiologically sensitive cancers; chronic lymphatic leukemia, multiple myeloma, Hodgkin’s and non-Hodgkin’s lymphoma.

So do low doses of radiation cause cancer? The debate about LNT will continue. Scientists on both sides of the LNT question about whether low-dose radiation poses any risk have dug in their intellectual heels and each side will see this evidence through their own lenses.

But the bottom line remains — and this study affirms —  that the risk of exposure to low doses of ionizing (nuclear) radiation, even assuming such risk does exist, is TINY. And responsibly, Abbott makes that clear. Contrast her story on the controversy over low-dose radiation risk with the overtly alarmist piece “The Mushroom Cloud and the X-Ray Machine”by Sarah Laskow in Foreign Policy, which goes into great depth about the issue, and repeatedly plays up the fears, yet mentions nothing at all about how TINY the actual risk is. It’s a blatant piece of alarmist radiophobia that on the basic journalistic standards of accuracy and completeness would fail a freshman journalism class. (I reviewed that piece in Risk Reporting Fail, Part Two; An Egregious Case of Journalistic Radiation-phobia.)

Sure, Abbott’s story is in a prestigious science magazine, which is expected to report scientific/risk issues accurately and responsibly. It would be much more dramatic to find an example of solid risk reporting in the popular media. But Abbott’s piece demonstrates that a good risk story, with plenty of attention-getting information about some potential danger that we ought to worry about, can still include information that helps the reader know all of what they need to know to judge just how worried to be. We should criticize risk reporting that is alarmist, and question whether to rely on journalists and media outlets that report that way. But we should praise and support, and rely on, the journalists and news outlets that report risk more responsibly.

Think leisure is pointless?
Up Next
Culture & Religion

What a Long Strange Trip: Psychedelic Research in America

Marijuana might steal the headlines, but psychedelics are making headway in the American consciousness. DMT: The Spirit Molecule producer/director Mitch Schultz discusses this trend.