There are a number of ways to affect the path of an asteroid—especially one that’s likely to cause massive destruction to Earth.

Enter Bennu, an asteroid as tall as the Empire State Building, but even more massive because it’s round. If it plunged into our planet, the effects would be absolutely catastrophic no matter the point of impact. As of right now, the chances that it will do just that are 1 in 2,600; these numbers get refined as time goes on and the potential event gets closer. 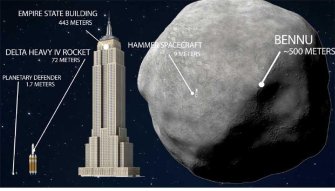 The year 2135 is what NASA is looking at for it to encounter Earth, if it’s actually going to. There is talk of launching a rocket to “nudge” it out of its current path; scientists based at the Lawrence Livermore National Laboratory have been studying, with NASA, the possibility of on a spacecraft they would call HAMMER (Hypervelocity Asteroid Mitigation Mission for Emergency Response vehicle), but that looks like it would have no effect on something this size. Another possible way to affect the trajectory of an asteroid is to send up satellites to travel alongside the object, using gravitational pull to alter its path. Again, that won’t work with this behemoth.

One of the only ways to deal with a rock the size of Bennu, then, is a nuclear warhead; that’s not preferred by scientists because there’s a good chance it would rain radioactive stones and chunks right back into our atmosphere.

With enough time—in Bennu’s case, over 100 years—perhaps a better solution will be developed, but the fact remains: we’re vulnerable to such objects ramming into us, and we don’t have a lot of great options to prevent it.

It is, after all, what caused dinosaurs to go extinct, and the cosmic shooting gallery that we live in hasn’t gone away.

Becoming less physically active as you get older is not inevitable.
Up Next
Mind & Brain

Study reveals surprising link in the brain between coffee and cannabis

A new study shows how increased coffee consumption interacts with the endocannabinoid system, which the body uses to process cannabinoids found in marijuana.