The Large Hadron Collider (LHC), the world’s biggest scientific instrument, is also the planet’s most powerful particle accelerator. And that makes it a potential danger not just to itself or its immediate surroundings in Switzerland, but to Earth and maybe even our reality itself.

This warning comes not from an incorrigible luddite but the influential British astrophysicist Lord Martin Rees, who sees three ways in which the collider could cause a disaster of cosmic proportions.

1. A BLACK HOLE SUCKS US IN

For one, cautions Rees in his new book On The Future: Prospects for Humanity, it’s possible for the experiments conducted at the LHC to form a black hole which would “suck in everything around it”.

And if apocalypse by way of black holes doesn’t come to pass, it’s also conceivable that Earth could get compressed into a “hyperdense sphere about one hundred metres across,” as writes Lord Rees, the Emeritus Professor of Cosmology and Astrophysics at the University of Cambridge.

That could happen due to the subatomic quarks generated by the Large Hadron Collider, which smashes particles against each other at super-high speeds to study the fallout. The quarks could reassemble themselves into appropriately named (and currently hypothetical) particles called strangelets, which, in turn, could transform everything in their way into a new highly-compressed form of matter. So Earth would become no larger than a football field. 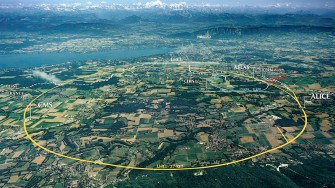 There is, unfortunately, a third way towards unimaginable disaster courtesy of the LHC and other particle accelerators like the new one being built in China which would be twice as large and 7 times as powerful as CERN’s. Martin Rees thinks that there’s a chance the colliders could cause a “catastrophe that engulfs space itself”. That’s certainly nothing to take lightly.

Rees explains that contrary to what might be popularly imagined, the vacuum of space is not really full of mostly nothing but emptiness. The vacuum, says Rees, has in it “all the forces and particles that govern the physical world.” And it’s possible that the vacuum we can observe is actually “fragile and unstable.”

What this means is that when a collider creates concentrated energy by crashing particles together, it can cause a “phase transition” which would tear the fabric of space. “This would be a cosmic calamity not just a terrestrial one,” notes Rees. 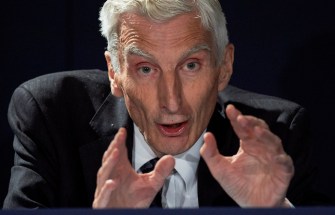 Professor Baron Martin Rees of Ludlow, speaks during a news conference in London on July 20, 2015.

So, can it happen?

While dramatic fears have circled around the Large Hadron Collider from the start, the LHC has always maintained that the work carried out there is safe. CERN, which runs the LHC, states on its website that according to a 2003 report “LHC collisions present no danger and that there are no reasons for concern.”

In fact, points out the European nuclear research organization, there’s nothing being done at the lab that nature hasn’t already “done many times over during the lifetime of the Earth and other astronomical bodies.”

The LHC staff goes even so far as to specifically refute the threat from strangelets. They turn to a study done in 2000 that “showed that there was no cause for concern.” The statement goes on to observe that the collider “has now run for eight years, searching for strangelets without detecting any.”

“The second scary possibility is that the quarks would reassemble themselves into compressed objects called strangelets,” writes Rees. “That in itself would be harmless. However under some hypotheses a strangelet could, by contagion, convert anything else it encounters into a new form of matter, transforming the entire earth in a hyperdense sphere about one hundred metres across.”

Still, an argument that there’s nothing to fear just because they haven’t found anything too strange and extraordinary is not completely comforting.

What would Lord Rees, who sees such dangers, do to the collider? The scientist, known for carrying out important theoretical work on a variety of subjects – from black hole formation to extragalactic radio sources and the evolution of the Universe – is not necessary calling for the LHC to be shut down.

Rather he reminds that “innovation is often hazardous.” That doesn’t mean you shouldn’t innovate but that “physicists should be circumspect about carrying out experiments that generate conditions with no precedent, even in the cosmos.” Words to live by when nothing less than the continual existence of the world is at stake.

Signals from across the universe point toward a fascinating possibility.
13.8

After 100 million nights of people asking, “What are those twinkly lights?” it is pretty remarkable that we happen to live in one of the first generations that actually knows the answer.
Hard Science

Researchers hypothesize that these exoplanets could support the development of alien life.
Up Next
The Present

Some stress out. Some read. Some drink.