As weather becomes more extreme, we can expect the intensity of hurricanes to be on the rise. As it is, according to the Congressional Budget Office, the average yearly costs are already about $28 billion. Most of that tab has been run up in just three states: Florida, Texas, and Louisiana. Of course, these aren’t the only states seeing catastrophic weather, and the dollar amount doesn’t begin the describe the often devastating impact of big storms on victims’ lives.

Farah & Farah, a law firm specializing in personal injuries, decided to find out what people who are experienced in surviving hurricanes do to get ready. Using Amazon’s Mechanical Turk, they questioned 1,200 storm veterans about what the approach of a big storm means to them and how they prepare for, and handle, trouble weather. A page of revealing infographics, dubbed Handling Hurricanes, is the result. 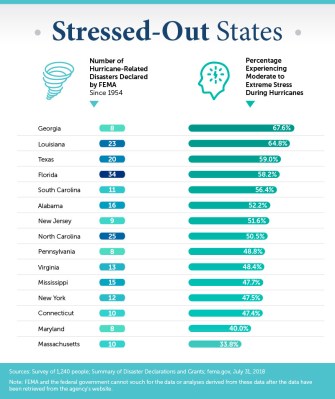 No biggie. Or yes biggie.

When asked just how stressful they find an approaching storm, it turns out that people from Georgia, which has had relatively few hurricane disasters, are the most bothered of anybody. Louisiana and Texas come in next, which makes sense given their track record. Surprisingly, Floridians, the people who are far and away most clobbered by big storms, are surprisingly blithe about them, at least compared to Georgians. (Sunshine Staters are a breed apart, and we’ll have a closer look at them later.) 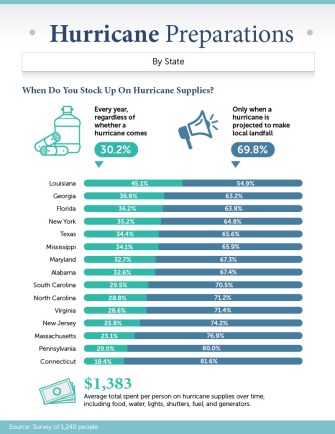 No one in a region that regularly experiences hurricanes can say they’re totally surprised when the dark clouds come rolling in. But, like the children’s story of the ant and the grasshopper, some people plan ahead, remaining in a state of preparedness, and some people wait until a storm is bearing down. Storm prep costs can add up, especially right before clouds roll in, when the scarcity of supplies and food causes prices to spike — if goods are still available at all. A rational case could be made for preparing before the weather turns.

That having been said, the survey found that nearly 70 percent of people wait until close to the last minute to get ready. Standing out as most forward-thinking are Louisianans, who have seen with Katrina just how bad a storm and its aftermath can be, and how coming back afterward can take a very long time, when it’s possible at all. 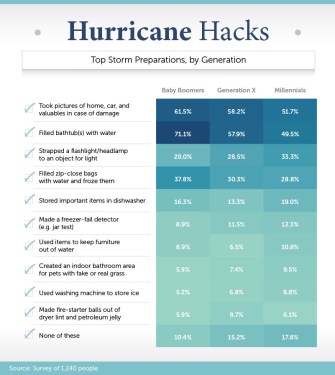 Of course, what preparing for a hurricane means depends on who you ask, and the survey revealed how the answer may depend on your age.

Baby Boomers, who generally do a more through prep, consider their number one task to fill a bathtub with potable water. For Gen Xers and Millennials, the prime directive is to take pictures of valuables for post-maelstrom insurance claims. Millennials also consider it important to fashion a headlamp of some sort — you never know when selfies will be taken. 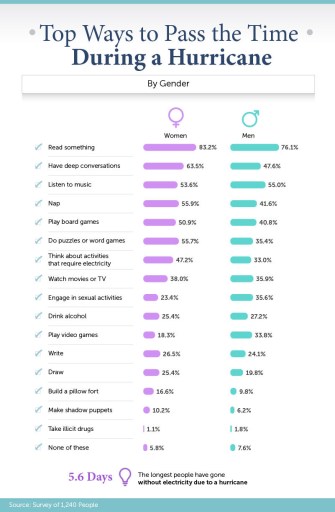 Since all normal activity is on hold…

If you haven’t been evacuated from your home as the darkness falls, what’s next? You’re as ready as you can be, so…

Most people, by far, read during a big storm, at least as long as they have light to read by, presumably. For women, the second-most common bad-weather activity is having deep conversations. Men aren’t far behind — it’s their third place choice. In second for men is listening to music, and third place for women? Zzzzzzz.

Storm sex? Sure, for 35.6 percent of men, but just 23.4 percent of women. There could be a few different reasons for the disparity. We’ll leave that little guessing game to you.

Ten percent of women make shadow puppets. Aw. For those wishing it would just stop — likely people with young children — there are pillow forts to be built. Aw, again. 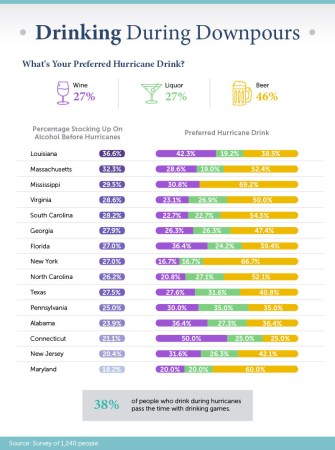 So about that 25.4 percent of women and 27.2 percent of men, hurricane readiness must include acquiring hooch. Their favorite thing to drink as the world maybe ends is — no surprise — beer. 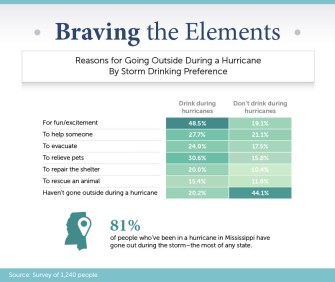 Drinkin’ in the rain…

About half of those surveyed who drink go out during the madness for fun. People full of liquid courage also brave the elements for less ridiculous reasons, such as evacuating — hopefully someone else is driving — and performing rescues and repairs.

Half of the people surveyed don’t go out. Darwinism at work? 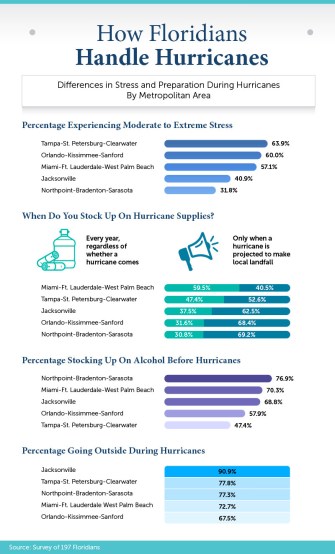 It’s by no means the case that people from Florida get so many storms that they don’t care. It’s just that it’s part of life there, and Farah & Farah thus award them their own breakdown.

In three of the five examined regional areas, about 70 percent of respondents buy alcohol when preparing for a storm. Only in the cities of Tampa, St. Pete, and Clearwater do less than half of the people surveyed liquor-up, even though they’re the most stressed by approaching storms. Still, a solid majority of these people go out during storms — in fact, in Jacksonville, only 9.1% don’t. Yipes.

Sorry. Too late. We have. It certainly feels like weather is getting more extreme, and recent storms seem to have served as an inflection point for many people regarding their attitudes about climate change. Turns out the dire warnings have been optimistic — it wasn’t supposed to get so crazy so soon, right? Vox recently published a great article describing what our options going forward are. It turns out it may not be too late just yet. It’s well worth a read.

A new study looks at what happens when you get infected with two viruses at the same time.
Up Next

Meet the Startup That Could Ignite a Home Renewable Energy Revolution

Over the last several years, global concern over climate change has spurred billions of dollars in investments in renewable energy projects all around the world. The increased pace of development […]