Welcome to Hurricane Season 2020. 2020, of course, scoffs at this calendric event much as it has everything else that’s normal — meteorologists have already used up the year’s A and B storm names before we even got here. And while early storms don’t necessarily mean a bruising season ahead, forecasters expect an active season this year. Maybe storms will blow away the murder hornets and 13-year locusts we had planned.

According to NOAA’s Climate Prediction Center, an agency of the National Weather Service, there’s a 60 percent chance that we’re embarking upon a season with more storms than normal. There does, however, remain a 30 percent it’ll be normal. Better than usual? Unlikely: Just a 10 percent chance.

Where a normal hurricane season has an average of 12 named storms, 6 of which become hurricanes and 3 of which are major hurricanes, the Climate Prediction Center reckons we’re on track for 13 to 29 storms, 6 to 10 of which will become hurricanes, and 3 to 6 of these will be category 3, 4, or 5, packing winds of 111 mph or higher.

This year’s El Niño (“Little Boy”) looks to be more of a La Niña (“Little Girl”). The two conditions are part of what’s called the El Niño-Southern Oscillation (ENSO) cycle, which describes temperature fluctuations between the ocean and atmosphere in the east-central Equatorial Pacific. With an El Niño, waters in the Pacific are unusually warm, whereas a La Niña means unusually cool waters. NOAA says that an El Niño can suppress hurricane formation in the Atlantic, and this year that mitigating effect is unlikely to be present. 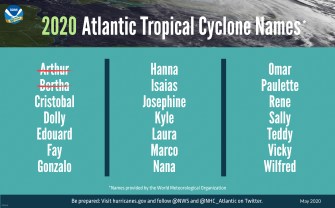 ArsTechnica spoke to hurricane scientist Phil Klotzbach, who agrees generally with NOAA, saying, “All in all, signs are certainly pointing towards an active season.” Still, he notes a couple of signals that contradict that worrying outlook.

First off, Klotzbach notes that the surest sign of a rough hurricane season is when its earliest storms form in the deep tropics south of 25°N and east of the Lesser Antilles. “When you get storm formations here prior to June 1, it’s typically a harbinger of an extremely active season.” Fortunately, this year’s hurricanes Arthur and Bertha, as well as the maybe-imminent Cristobal, formed outside this region. So there’s that.

Second, Klotzbach notes that the correlation between early storm activity and a season’s number of storms and intensities, is actually slightly negative. So while statistical connections aren’t strongly predictive, there’s at least some reason to think these early storms may augur an easy season ahead.

If 2020’s taught us anything, it’s how to juggle multiple crises at once, and layering an active hurricane season on top of SARS-CoV-2 — not to mention everything else — poses a special challenge. Warns Treasury Secretary Wilbur Ross, “As Americans focus their attention on a safe and healthy reopening of our country, it remains critically important that we also remember to make the necessary preparations for the upcoming hurricane season.” If, as many medical experts expect, we’re forced back into quarantine by additional coronavirus waves, the oceanic waves slamming against our shores will best be met by storm preparations put in place in a less last-minute fashion than usual.

Ross adds, “Just as in years past, NOAA experts will stay ahead of developing hurricanes and tropical storms and provide the forecasts and warnings we depend on to stay safe.”

Let’s hope this, at least, can be counted on in this crazy year.

As we listen to melodies, our brain guesses what’s next

The way we imagine and listen to melodies sheds light on imagination.
Up Next
The Present