Facebook is rolling out a new feature designed to help users delete old posts in bulk instead of one at a time.

The company announced Tuesday that its “Manage Activity” tool will allow users to delete posts en masse, or archive them so that they’re accessible only to the user. Manage Activity will let users organize old content in batches, sorted by filers like specific date range and posts involving certain people.

Manage Activity is available today on mobile and Facebook Lite, and the company says it’ll be functional for desktop users in the future.

“Whether you’re entering the job market after college or moving on from an old relationship, we know things change in people’s lives, and we want to make it easy for you to curate your presence on Facebook to more accurately reflect who you are today,” Facebook wrote in a statement. “That’s why we’re launching Manage Activity to help you archive or trash old posts, all in one place.” 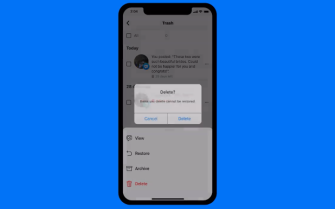 Why is Facebook releasing the feature now? A company spokesperson told Recode that users and privacy advocates have long requested better control over past posts. Users have had access to the “limit past posts” option, which blocks the public from accessing a user’s posts past a certain date. But there has been no way to delete old content in batches.

Now, the feature could bring users some peace of mind. After all, the platform currently has more than 2.6 billion monthly active users, and some of these users created accounts in their teens, around the time Facebook became widely available in 2006. As these veteran users get older, it seems likely that many would want to delete years-old posts, whether because content is embarrassing, outdated or professionally jeopardizing.

But they’re not always accurate. One AI-powered background service called Checkr has even faced lawsuits from people who claim the company’s algorithms made mistakes that cost them job opportunities.

It’s unclear when Manage Activity will become available on desktop. But to learn how to use it on mobile or Facebook Lite, check out this instructional video from Facebook.

Here’s how to design a work environment that gives control to employees and stimulates open conversation.
▸
with
Todd Rose
Up Next
Hard Science