As the results of the U.S. presidential election start rolling in Tuesday evening, Facebook and Twitter plan to remove or modify posts they deem misleading.

The company says it will remove or add a warning to tweets that declare election wins before they’re “authoritatively called” by a state election official, or by at least two of the following national media outlets: ABC News, The Associated Press, CBS News, CNN, Decision Desk HQ, Fox News, and NBC News.

“We do not allow anyone to use Twitter to manipulate or interfere in elections or other civic processes, and recently expanded our civic integrity policy to address how we’ll handle misleading information surrounding these events. Under this policy, we will label Tweets that falsely claim a win for any candidate and will remove Tweets that encourage violence or call for people to interfere with election results or the smooth operation of polling places.”

Twitter also plans to remove or modify tweets “meant to incite interference with the election process or with the implementation of election results, such as through violent action, will be subject to removal.”

A few weeks ago, we announced how we will handle Tweets about US election results.

We want to remind you what to expect and share a preview of the labels we may apply. 🧵https://t.co/Fuawn83HrM

Expect to see Twitter attach warnings — which users must tap through — on “misleading” tweets from candidates, campaign accounts, and accounts with more than 100,000 followers.

Twitter is also trying to make it harder for the average user to retweet misleading tweets by prompting them to “quote tweet” when they click the retweet button. The goal is to add a layer of “friction” that slows the spread of posts deemed misleading.

When people attempt to Retweet a Tweet with a misleading information label, they’ll see a prompt pointing them to credible information before they are able to amplify it further on Twitter. pic.twitter.com/xuIp7msKWa

“We hope it will encourage everyone to not only consider why they are amplifying a Tweet, but also increase the likelihood that people add their own thoughts, reactions and perspectives to the conversation.”

Another change: Twitter will prevent “liked by” and “followed by” recommendations from appearing in users’ timelines. The company notes that, while this feature can help people access viewpoints outside their network, it doesn’t “believe the ‘Like’ button provides sufficient, thoughtful consideration prior to amplifying Tweets to people who don’t follow the author of the Tweet, or the relevant topic that the Tweet is about.”

If we see content inciting interference with the election, encouraging violent action or other physical harms, we may take additional measures, such as adding a warning or requiring the removal of Tweets. pic.twitter.com/ByBHmyNaxF

“This will likely slow down how quickly Tweets from accounts and topics you don’t follow can reach you, which we believe is a worthwhile sacrifice to encourage more thoughtful and explicit amplification.”

Twitter’s policy changes are the latest in a series that aim to minimize the influence of misinformation on U.S. elections. Of course, Twitter’s policies are also likely designed to shield the company from accusations that it’s eroding the quality of American political discourse.

Twitter listed some of its recent policy changes, the most impactful of which was its decision to ban political ads in late 2019:

“If a candidate or party declares premature victory before a race is called by major media outlets, we will add more specific information in the notifications that counting is still in progress and no winner has been determined.”

“If the candidate that is declared the winner by major media outlets is contested by another candidate or party, we will show the name of the declared winning candidate with notifications at the top of Facebook and Instagram, as well as label posts from presidential candidates, with the declared winner’s name and a link to the Voting Information Center.” 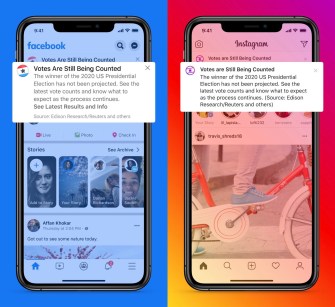 After the election, Facebook and Instagram plan to stop circulating all political ads in an effort to block misinformation about the outcome. The company said this ban should last a week.

Tags
Election 2020ElectionsFacebookinstagrampoliticsSocial mediatechnologytwitterunited states
In this article
Election 2020ElectionsFacebookinstagrampoliticsSocial mediatechnologytwitterunited states
Related
Neuropsych
We need boredom to live better lives. But social media is destroying it
When boredom creeps in, many of us turn to social media. But that may be preventing us from reaching a transformative level of boredom.
High Culture
Could letting social media users rank accuracy help stop misinformation?
People naturally judge fact from fiction in offline social settings, so why is it so hard online?
Health
What is brown noise? Can this latest TikTok trend really help you sleep?
Brown noise, the better-known white noise, and even pink noise are all sonic hues.
Thinking
A “psychological vaccine”: Why prebunking is the best way to fight misinformation
By exposing people to small doses of misinformation and encouraging them to develop resistance strategies, “prebunking” can fight fake news.
Why geniuses hunt demons for sport
Jimena Canales shares the “demons” that shaped computer science.
▸
6 min
—
with
Jimena Canales
Up Next
Health
Do vitamins help you fight COVID-19?
So far, the research is mixed.